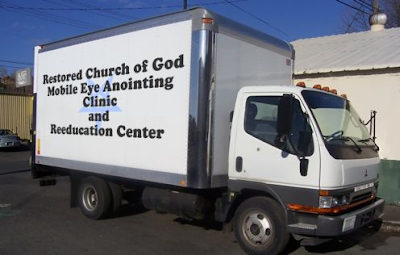 That vehicle looks suspiciously like the one which was used in Dr. Who to capture homeless people to make them into Cybermen.

And not to put too fine a point on it, the Cybermen declared that anyone who went through the "upgrade" were Version 2.0 -- which is exactly what the RCG is in relationship to Armstrongism.

That truck is probably as big as their meeting hall where they meet on Saturdays.

This eye annointing has a delayed effect. Exposure to Pack, and seeing Armstrongism in its most exaggerated form accelerates the healing process, kicking it into its conclusion.

This may be a clever hook, but I sense a "kablooey" coming on in the not so distant future.

Hang on! It's going to be a wild ride.

Hang on! It's going to be a wild ride.

Nonsense -- the truck is broken down and isn't going anywhere.

Eye think that if we would hire Perry Mason, Paul Drake would find that truck is a murdermobile, possibly even having run over people on Della's street.

Not to mention a dead rodent or two left in mailboxes on Della's street.

The Packatollah-
WHAT A GUY!

I've heard it said that he makes a lot of sense.
It's sad that he does for some.

MORE DEAD RODENTS THROWN THROUGH THE WINDOWS OF HOUSES OF YOUR DETRACTORS, DAVIE!!!

That's what Jesus would do.

Douglas, Dave doesn't care about the truck being broken down. He'll push it around, and still manage not only to ruin additional lives, but also to run over more of the rodent's that attack Norm's peterpepper garden!