Prophet Thiel: The Authority on Everything 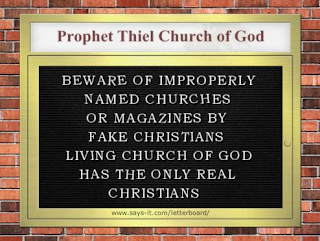 Prophet Thiel of the improperly named "Living Church of God" has been quit disturbed lately by the names of various COG's and Christian magazines.

The other day he slammed Christianity Today with this little barb:

Valentine’s Day is observed by many in February. As in prior years, in addition to seeing store displays and tv & print ads, I noticed that the falsely labeled Christianity Today (CT) is again compromising from biblical principles in order to attempt economic gain as it is promoting some jewelry purchases on its “Valentine’s Day” page.


Today his is taking potshots at Gerald Flurry's cult:

Joel Hilliker of the improperly named Philadelphia Church of God (cf. Revelation 3:9) wrote the following (Lessons From the Bloodbath in Syria.  February 8, 2012. From the Trumpet.com):


Prophet Thiel's hypocrisy is beyond measure.  Look at all the baggage associated with the formation of LCG and how they all jumped ship taking Global Church of God's money with them.  Look at the people who connived behind the scenes to form both of these two groups and then stabbed their friends in the back as they left and formed new groups. Prophet Thiel needs to admit that there is NOTHING "Living" about LCG.
Improperly named Living Church of God has a lot to answer for.
Posted by NO2HWA at 1:25:00 PM

Yes, it seems that the Living Church of God is headed by old, dying men. Much of their membership is made of gray heads, although this is not unusual with any COG.

Bob Thiel is one of those guys who can't be wrong or taught anything because he already knows it all. What a great, humble Christian man. /end sarcasm

NO2HWA said, "Prophet Thiel needs to admit that there is NOTHING "Living" about LCG.."

MY COMMENT - As far as I am concerned, this is a true statement. My mother was a WCG/LCG member who passed away almost three years ago.

My mother was a WCG/LCG member who passed away almost three years ago.

It was either Roderick Meredith or Saturday Afternoon Wrestling at the arena.

Come to think of it, this blog may be improperly named!!!

If this is an "Armstrongism Library," there sure aren't a lot of books!

The essence of the problem with leadership in any of the ACOGs is that these people are blatantly, and willfully, totally uncool. This means that they do not relate to others as would possibly older, more mature and experienced mentor-Christians, but simply as a robot or computer deeply programmed in Armstrongism. If you wish to know their opinions on virtually anything, all you need do is delve into the magazine and booklet archives from the classic Old School WCG era.

It's difficult to relate to someone who doesn't actually live life. No hobbies, no interest in even the good elements of contemporary sports or culture, therefore, no tangible way of reaching people who come from varying lifestyles. It's a heart thing. Resonation is key, not revulsion or the classic turn-off.

What do James Malm, Dave Pack, Bob Thiel, or Gerald Flurry know about NASCAR, raves, Xtreme sports, or Jerry Garcia and the Grateful Dead?
or, for that matter, a single mom trying to raise children, or a recovering crack addict? How would they relate (as Paul did) to the broader spectrum of humanity? Answer: They can't and wouldn't, because all they do is repeat programming, and wait for that programming to be repeated back as evidence of conversion, just like HWA, who was never "cool", but always aloof and inaccessable to most of his followers.

No, these are very narrow minded people, who do their best to shut life out, an activity which separates them from being effective in relating to, and truly helping most other humans. Welcome to the cultic "Ambassador Experience".

Every time I start on a book to transcribe, some Armstrongite goes and writes or says something incredibly stupid and I have to stop and nail their sorry asses on it. Most of these morons feel they are not accountable for what they do in the Church of god. If they would all shut up and stop making public asses of themselves, I could work on some more books.

Maybe Anon can get off his lazy ass and transcribe some of those books for you!