The Church of God Trojan Horse 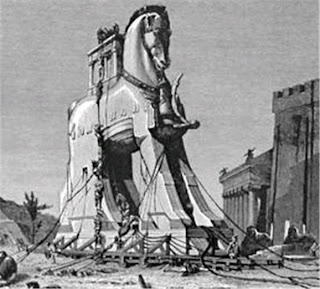 Silenced has an excellent post today on the desire of the Churches of God to live on the "fringe" while trying to maintain an air of respectability.  Silenced looks at UCG's recent attempt to try and be hip and cool with a series of videos trying to make God cool.  UCG is trying to imitate the successful  series of videos and books by Rob Bell called NOOMA over the last few years.  UCG cannot even come close.

Silenced is correct in calling UCG's video's "Trojan Horses" as they try to infiltrate mainstream Christianity.  Their videos may look harmless on the surface, but it's the deadly message inside the horse that is going to cause problems.

Living on that lonely edge has deterred growth, the COG withering on a vine of its own planting as it continues to promote a closed culture of control and unorthodoxy for its own sake. COG attempts to distinguish itself from the packs of other doomsday followings haven’t made the church stronger or more recognizable, nor has it added power to its message or microphone. Instead, the COG is left to dwell in obscurity even while trying to pour more money into its media projects. What most COG groups don’t seem to understand is that growth problems aren’t rooted in a lack of money and resources, things it constantly tries to hustle from its members for bigger and better toys. Rather, its message isn’t gaining popularity or recognition because it continues to embrace HWA’s legacy of rejecting the mainstream in a world it’s trying to warn.

In short, the cult’s message just isn’t inherently appealing to most and it hasn’t figured out a way to package fringe beliefs in more publicly-palatable packaging. COG tactics are outmoded and obsolete in the digital age, its words don’t resonate with the current generation and it simply comes across as insane.

Take UCG’s recent series of short clips, including the infamous Sand and Drive. These were attempts to flirt with mainstream Christian imagery and messages as a Trojan horse for its more unorthodox teachings.

I worry about one evolving trend. Suddenly, LCG's cruddy cookie cutter version of the World Tomorrow is on TBN. For the first time, their "work" is actually becoming visible. Not to be outdone, RCG is going to be on ION TV, and PCG is already there.

what strikes me is this. We've often commented about the voice of Armstrongism being diluted to nothingness, relegated to near invisibility by the splintering. Wouldn't it be ironic if even though they cannot get along amongst themselves, the splinters' broadcasts and Armstrong pseudo-gospel ended up collectively blanketing the airwaves?

From our point of view it would be ironic. But for the unsuspecting minds who fall victim to the trap being spread across the airwaves tragic is a better word.

Tragic indeed! However, I seriously doubt it can happen. These clowns seriously lack something Herb had -- that uncanny knack to hold people spellbound by his oratory. He could go on and on about one or two verses for days, broadcast after broadcast, and it never got boring. If he had been Irish, I would call it a gift for the blarney. It was certainly a gift for BS.

Good luck with all that. I can't imagine very many people sticking around when they learn about the church's kooky beliefs. And nobody likes a bait and switch. In this case, it would be like getting a shit sandwich.

They'll deceive a few unwary people who are searching. It's been that way all along. The old revival tent meetings did the same thing, and Herb started out doing those. Some of those people were very prominent in the original organization. The question is whether they can attract enough suckers to keep it all going.