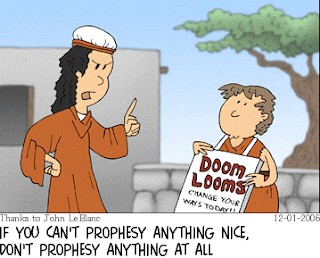 Darn it!  I was looking forward to the miracles to come flowing out of the Pope's fingertips in two weeks.  Now we have to wait another year because Apostle Malm screwed up his calculations.  Don't you just hate it when that happens!

I believe that the time threshold for this pope dying and being replaced this year has been passed.

That means that only two possibilities remain.

1)  Either Benedict is empowered as the abomination on the appointed day, or

2)  this is NOT the year and we have another year to turn to our God and make ourselves ready.

I believe that the probability still exists for Benedict to be empowered, however that probability is now down to only a minuscule possibility.

The primary basis for speculating that there was a very good chance this year, was because the count from the resurrection on the 1,290th day of Dan 12, on the sixth day of ULB, ended up exactly on the day before Pentecost.

Pentecost representing a new beginning with God’s spirit being poured out on all flesh.

In fact, 2012 was an excellent probable year for the abomination to be set up and that could still happen, although it would be a real squeeze; as there appears to be not enough time for the coming war and its aftermath.


But the fool did not learn his lesson.  Like Rod Meredith, Herbert Armstrong and all the others, he just moves the date forward.

I guess I should put one more notch on my bedpost for another year in which I was excited to finally meet Jebus, and he let me down...again. He's let down his bestest friends in the world (people just like me) for going on 1,981 years in a row, but do I give up hope? Never! He better come soon though, cause I'm going to run out room for new notches on my bedposts, and I don't have room in my tiny little rent-controlled apartment for a second bed. Maybe all of you could pray for me that Jebus would somehow allow me to get a bigger apartment and a second bed so that I can keep making notches...

Anonymous 12:27 AM said, "He better come soon though, cause I'm going to run out room for new notches on my bedposts, and I don't have room in my tiny little rent-controlled apartment for a second bed."

MY COMMENT - Chances are you'll run out of life before you fill a second bed with notches waiting for the return of Christ.

"Chances are you'll run out of life before you fill a second bed with notches waiting for the return of Christ."

That's true, but it's also a big factor in the success of christinsanity. If I were 2,000 years old and sill believed, I would have to be friggin NUTS. And if I knew I was going to live another 2,000 years, I certainly wouldn't want to ride this stupid roller coaster another 2,000 times.

Herb at least always had a way of making his guessing seem authoritative and credible. Buenos notches!