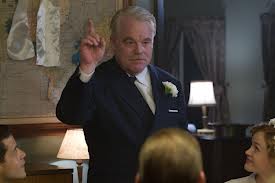 There is a new movie coming out that deals with a con man starting a cult similar to Scientology.  It has been getting rave reviews.  Given our history of being involved in another man made cult this might be a great movie to check out.

“The Master” is a dangerous movie. I can’t remember a time in recent memory when I worried about what characters might do when they entered a scene. But when Joaquin Phoenix comes into a frame or scene at any time in “The Master,” you’re really concerned he’s going to hit or kill somebody, or do something utterly wild and unpredictable. His character, Freddie, is an alcoholic and a sociopath. Freddie has just been discharged from the Navy at the end of World War II. He’s a sexual deviant, who we learn later was abused by an aunt. Freddie is also a loner, a drifter whose temper is so bad he can’t hold a job. And then he meets Lancaster Dodd, and his life changes completely.

Dodd is played by Philip Seymour Hoffman. He comes with a family–wife Amy Adams, a daughter and son in law, and a son. What is Dodd? He says he’s a writer and a nuclear scientist, among other things. But he’s also already come up with his own religion, a cult called The Cause. His own son says later that Dodd is just making it up as he goes along. But his wife is sold and is his collaborator. The son in law sees opportunity in it as well. And soon The Cause picks up a couple of wealthy female patrons, played by Patty McCormack (star of “The Bad Seed” in the 1960s) and the much missed Laura Dern. (I wish she were in more movies. She’s spot on.)

There’s so much going on in “The Master,” you almost need two hours and 17 minutes to dissect it. It’s a gritty, edgy, uncomfortable film marked by Freddie’s deviancy and Dodd’s avuncular unease. Phoenix and Hoffman are completely riveting, never once hit a false note, and keep the action moving. Amy Adams peels back a new side of her very interesting, onion like sensibility. She seems to always have new tricks to show us. Knowing that Hoffman and Phoenix are show stoppers, Amy works along the edges until she sees her moment. She’s absolutely terrific.

The Cause is not Scientology per se. But it mimics it. The courses are called “Applications.” There are kind of EEG machines. There’s a violence to the Cause, mostly instigated by Freddie, that has been associated with Scientology. I was reminded of a lot of things– including Oprah tearing up every time a new New Age guru stops by with a book of aphoristic gobbledygook. Dodd knows he’s making it up as he goes along. Wait for the scene when Dern meekly questions something in his book. He’s contradicted an earlier stand. Dodd–Hoffman–loses it, and we get a glimpse into his Machiavellian mind.

But the sham that is The Cause is unveiled–at least for the audience. When Hoffman/Dodd finally reveals his big discovery–what will change everyone’s lives–you just shake your head. It’s as mundane as the stuff that comprises other cults’ revelations. The emperor has no clothes.


The review ends with this:

It’s not an easy movie, it’s not “The Artist” or “The King’s Speech” in that it’s happily embraceable. “The Master” is very sophisticated, mature filmmaking. I’m glad they’re releasing it on Septmber 14th. It’s going to take at least two months for every one to digest it and discuss it before the cacaphony of awards season starts.  “The Master” is a Masterpiece of Filmmaking

Tom Cruise has stated he has "Issues" with﻿ this movie. I'm sure, we can count on a thumbs-down, being issued from 'Master and Commander' Gerald R. Flurry, as well.

Issues? I think he's got a lot more "issues" to deal with than this movie--his whole belief system for starters! Scientology is total boosheet!! Thankfully Katie woke up before it was too late!

Russell Crowe's biblical tale of 'Noah' and the ark, is sure to be an epic masterpiece, too. Crowe usually delivers, he'll look great wearing a potato sack as Noah, and the rest of the cast looks awesome. Can't wait for this 2014 release.