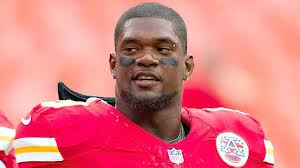 God's greatest end time man servant, E W King, has had one of his prophecies come true!  At least in his delusional mind.

Below is what he wrote yesterday.  I love how King and Pack refer to themselves as "Mr."

Mr. E.W.King posted a portion of his 2013 predicitons on November 7th,2012. He made an interesting statement regarding the world of American sports,..notice:

“We will see great controversy in the world of American sports. I do not have all the details regarding this but it is coming.”


Now notice what happened shortly after this was posted…we read the news story:

“It happened again, another chaotic and disturbing tragedy. An NFL player kills and then commits suicide.
Apparently, Kansas City Chiefs player Jovan Belcher, 25, argued with his girlfriend, with whom he had a 3-month-old daughter, and then shot her. He then went to the parking lot of Arrowhead Stadium where he took his own life, standing only 10 yards from his coach and police.” http://www.gloucestertimes.com/


Mr. E.W.King said during a talk that he gave in 2011 that he feared great changes in the professional sports world of America that would amount to federal control of the worst kind. Will we see this happen? Let’s stay tuned to COGSR for guidance.

The NFL is considering the elimination of the kickoff. As I understand it, all games would start at the 35 yard line with 4th down and 15 yards to go. The team that selects this position based on coin toss can either punt or go for the first down.

The theory is that punts are less dangerous than kickoffs and kickoff returns. In my mind, this would be a great upheaval in the sport of professional football.

Of course, it doesn't make E.W. King a profit (OOOps, I mean Prophet) of God. It just means he made a vague statement that subsequent circumstances could be construed to confirm his vague statement.

To others, the New Jets going to the Super Bowl could be construed as a great upheaval.

PS I'm sensing financial problems and someone is having chest pains...am I right????

My goodness. How conclusive and overwhelming that Mr. Ewww is a prophet being mightily used.

This is funnier than what happened at AC! Someone would catch a cold, get annointed by a
WCG minister, and two weeks later be completely healed!

Someone would catch a cold, get annointed by a WCG minister, and two weeks later be completely healed!

Which is a week longer than it would take if they weren't anointed or did nothing at all.

Talk about blessings being cursed!

If I good enough, I can predict the winners and make money that way.

I don't gamble but I do bet on sure things that God has revealed to me (I must admit that there's been a dry spell, so I haven't even bought a dollar Lotto, but God does things in His time -- probably a life time).

I sense that E. W. King has not scored a home run on this one.

Hey, I don't much know the game, but I'd say you have two more misses to go before you are declared OUT!

On the other hand, E. W. King is already way out, so maybe he's not even in the game.

In ArmstrongSpeak, this is known as "mocking".

Other than what makes the news, I don't usually know anything about baseball, basketball, or football, mostly because I've always been a techie and am into motorsports. I hope Ewwwwww will leave NASCAR out of his false prophecies, though.

A personal comment:
I am reasonably certain that I would not be interested in supporting any of the groups that are getting the type of exposure they are given here no matter what message they are promoting. What puzzles me is what they have to offer that would appeal to anyone who has a serious interest in biblical Christianity.
It appears to me their main interest is to generate controversy over things that make no relevant contribution to a better life. I realize that many people are not interested in becoming perfect (no matter what perfection is), but who in their right mind wants to be thought a fool (unless the pay is good).

Well, Anonymous, what they are doing is just another method of faking God's activities. In the Bible, crowds gathered, and people followed certain patterns because God made them noticeable. That's the real deal. Anyone can take the cheap shot and make them selves notorious, or noticeable, just by saying and doing outrageous things. But, that is human activity, not God's.

There are people exploiting the gospel, and there are people actually spreading it. Some orator, or clown that jumps around and makes the spectacle all about himself, or his group is automatically tipping discerning ones off that he is in reality a clown, or a fool. The non-discerning ones will always support these clowns, which makes people who pride themselves in their objective thinking conclude that there isn't a real deal, and that therefore anyone who believes in Jesus Christ is a fool.

I wish Jesus would leave NASCAR alone.
Apparently, Gun-Toting NASCAR Jesus has got himself a sweet ride.

That "Gun-Toting NASCAR Jesus" picture brings up a feature of modern Jesus portraits someone pointed out to me some years back. Cover the lower parts of his face and look closely at the eyes. You'd think it was a woman, wouldn't you?

What's up with that?

Norm, you may not believe this, but
ten years ago, I mocked the racers that put Jesus' name on their cars, and even protested some of the activities put on at the track by "Racers for Christ". Because of my comments, I even lost my customer temporarily who printed and mailed RFC's materials locally.

I don't much like to see Jesus portrayed as some kind of little fem guy, but I was a real obnoxious fool to insult racers and believers at the track the way I used to. I'm not excusing myself, but this sort of reaction comes about easily and naturally when you are exposed to horrible toxic charlatanic teachers for decades of your life.

Most of the racers I've known are honest family people who would give the shirts off their back to another racer with a broken part or a problem that would keep them off the track. HWA taught us that motorsports were of Satan, and that all people went to see were the crashes. How blind he was!

I have nothing against Christians plastering the name of (and/or symbols of) one of their deities on their sweet NASCAR rides.

In fact, my fervent hope is that those of other religions do it, too!

It would make NASCAR more exciting to many people, to see which religion-branded car gets flipped and rolls into an explosion of flames.

I bet I know which car Fox News commentators want to see explode!

So the great controversy is NOT the Catholic colleges planing to leave the "Big East" (B-East!) to set up their own basketball conference?

Naah - I guess that wouldn't fit the COG mindset.