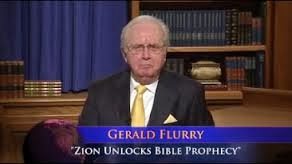 Gerald Flurry has been experiencing health issues as of late.  Numerous people have reported how ill and run down he looks.  Exit and Support is reporting that Flurry fainted during his sermon yesterday:

EDMOND, Okla. (Jan. 4, 2014) — At approximately 2:35 p.m. CST, Philadelphia Church of God Pastor General Gerald Flurry fainted briefly while giving a sermon to the headquarters congregation at Armstrong Auditorium. After awakening from the short fainting spell and being helped from the stage, the pastor general was anointed by his son, Evangelist Stephen Flurry. As he relaxed backstage, his color returned and he was able to catch his breath more easily. Approximately five minutes later, services were concluded with a hymn and closing prayer by Stephen Flurry.

The 78-year old pastor general said he had felt tired and run down earlier in the week, but felt he needed to push through to deliver the sermon, which focused on new revelation from Ezekiel. Pastor Andrew Locher had noticed Mr. Flurry struggled with a weakened voice when taping an episode of the Key of David television program on Wednesday.


Flurry may soon find himself in the same boat as David Hulme is currently experiencing.  Flurry's members are sick of his authoritarian control over their lives.  The Philadelphia Church of God has wrecked families and destroyed friendships over the last few years.  Many look at Flurry and the PCG as similar to the Jim Jones cult.  Flurry has his members constantly whipped into a state of immediate departure to Petra.  Fear runs their lives.

Question: Does the new revelation from Ezekiel have something to do with fainting on stage?

Was the final hymn, "Now the Day is Over, Night is drawing night"?

Are we really sure the "spell" didn't involve alcohol? It wouldn't be the first time.

Well, you know, when a guy is a leader of an abusive cult, he should expect some mocking and insults.

The fact, if the reported statement that he was tired all week is true, Flurry is very near to having a fatal heart attack.

His days are truly numbered.

Bykes, maybe it was the bitchin' Holy Spirit filled to overflowing.

Maybe he was "melting" like the "Wicked Witch" did in the Wizard of Oz!

He can't quit now, there are concerts & bank loans to pay off!
Besides, he is at least ONE of the TWO Witnesses, the Six-Packatollah!