Dave Pack Isolates Himself On His Compound 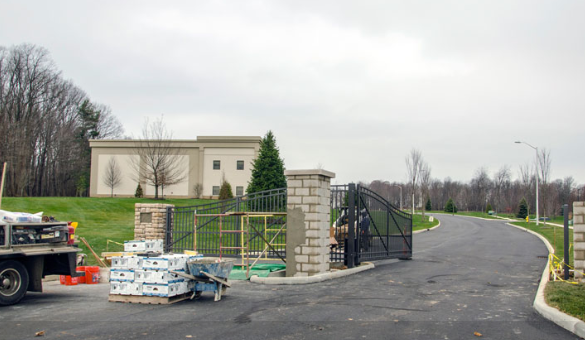 
Its now going on well over two years since Dave Pack uttered his absurd prophecy that three Church of God leaders would be struck down by his god and all of their members would come running in ecstasy to Dave's "church."  Two years ago when it failed the first time around Dave went silent.  When it failed to happen AGAIN in 2014 at the Feast of Tabernacles Dave circled the wagons with The Sixteen and came up with a way of keeping the riff-raff out of his cult compound.

Now Dave has resorted to installing gates on his compound's driveway.  He has to keep his dwindling flock isolated from the pagan filthy sinners of the world and ex-members.  Its amazing how exclusionary Armstrongite cult leaders are yet the man they claim to follow was never exclusionary.  He dined with sinners, prostitutes, and the undesirables of the world.  God forbid if any citizens of Wadsworth drive on to the property or particularly ex-church members.

I imagine the citizens of Wadsworth are pleased with the gates.  It keeps the Pharisees and hypocrites locked up in their fish bowl so the public can can stand in the big box store across the street and make fun of the Packites.
Posted by NO2HWA at 2:32:00 PM

Will Pack have "Work Shall Set You Free" written into the iron works on his new gate??

There are some mental health professionals who may call this something like 'paranoia'.

Paranoia? Why not? The ACOGs taught people to be paranoid of Father God! They depict Him as someone who holds salvation in jeopardy every day, someone who just can't wait to swoop down and mete out punishment for the most trivial offense! And, this is a really insidious thing in all of our lives, something that is very difficult to reprogram or get rid of! It literally affects all of our relationships and interactions.

Or you could just walk around the gate. What a showboat.

If you do go over to Dave's website to look at the slides of his "god"'s HQ and the "magnificent" grounds and "impressive" buildings . . .

If this week's photo selection includes the visit of a bird somewhere there, check out the sanctimonious caption suggesting that the bird went out of its way to stop "where God dwells."

That growing isolation is a disturbing sign. What's next, armed guards?

Armed guards... what a concept -- like those guards around Herbert Armstrong?

You know that the Church of God The Eternal actually locks the doors so no body can get in during the sermon (they keep Pentecost on Monday and have the same Marriage / Divorce laws that were changed in the early 70s)?

We just wouldn't want people of the world learning the truth about Armstrongist magic, would we?

Imagine the letdown. You know nothing of Armstrongism. You are attracted by all of the superlatives and braggadocio, assuming from Dave's lit and website that you are getting into something really big and awesome. Then, you get invited to church! On your "red letter day" you find that there are maybe 10-20 members in the congregation in your major US city (extrapolated from the figures from the much larger UCG).

Pack is a nothing:

He doesn't have his very own private jet.

Since I've read that the 'Arbeit Macht Frei' iron gate was stolen from the former Dachau death camp, I've wondered if some Packites stole it and reworked it it say, 'Zehnten Nach Pack Macht Frei'

Paranoia? Yes, but I think a lot of people "were out to get him", because of the persecution he first placed on them. This resulted in a pronounced effect in social functioning on both sides. Pack's personality disorder is beyond borderline. A casual comment or innocuous statement is perceived as a personal attack or an insult. Not only does he not have a personal jet, he needs to get a new personality. The man they love to hate!

If you want in, just drive on the lawn!

Packman needs to set up a guardhouse at the new gate and put Sgt Shultz in charge!

People who sign their initials at the bottom of the post when their name is already at the top have an ego problem. Perhaps those people are made in my image.