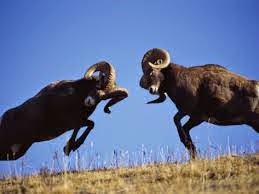 One of the biggest challenges every new splinter personalty cult faces is why would anyone want to join them.  With hundreds and hundreds of of splinter groups now spread around the world the Church of God has presented itself as a fractured and impotent organization.  For decades the Church of God regularly mocked Christianity for having so many different domination's in its midst. Armstrong, Meredith, Blackwell and many others constantly made fun of the "disunity" of mainstream Christianity.  Now the Churches of God are even more fractured than the churches around them.   The membership are getting sick of all the fracturing and keep asking, "why are we all not together?"

Norbert Link, from the Church of the Eternal God, has this to say since he is the leader of the ONLY true COG in this end time dispensation:

Why Are We Not All Together?

I hear it all the time from our viewers and readers: “Why are you not together with this or that organization which is also a part of the Church of God, since we are all believing the same thing?” If that were true, then we should all be together, but in reality, this perception is simply not accurate. In fact, we differ greatly in doctrine, administration, approach and purpose.

The founding documents of the Church of the Eternal God state the following in our Statements of Beliefs, under “Doctrinal Foundation”:

“The major doctrines of the Church are those, which were taught by Herbert W. Armstrong, derived from the Biblical teachings as followed by God’s faithful servants, and originally established by Jesus Christ through the founding of His Church in the time of His chosen early apostles. Since we are to increase in the knowledge of Jesus Christ, we are committed to review and alter any of our teachings, if and when proven to be wrong by from the Bible.”

Unlike other Church organizations which declared from the beginning of their existence that “everything is on the table” and that all doctrines and teachings of the Church must be reviewed and reconsidered, we have been taking the opposite approach. For us, nothing is on the table, unless a doctrine, teaching or administrative practice is proven to be wrong, based on Scripture. This means, even if we cannot fully prove a particular established teaching from the Bible, we will not change it, if we cannot prove it to be in violation of God’s written Word.

At the same time, we will change if a doctrine or administrative practice is shown to be in contradiction with the Bible. However, there are groups which say that nothing can be changed after Herbert W. Armstrong’s death in 1986… and some even go so far as to say that none of the Church’s changes can be accepted which occurred subsequent to 1974 and 1975, including major changes pertaining to the correct day of Pentecost and our teaching on divorce and remarriage. This concept that nothing can be changed today is clearly unbiblical and must be rejected.

Because the Church of the Eternal God is the ONLY enlightened COG out there, Link needs to emphasis that their understanding is the ONLY safe way of believing. His group  is the ONLY COG on the entire earth where TRUE unity and doctrine reside.

He does however bring up a valid point on why so many Churches of God let ministers come into their organizations, straight into leadership roles, when they stab previous organizations in the back just a few days or weeks earlier.

Ted Budge is a prime example of that right now.  He left David Hulm's fledgling group early last year when a small group of ministers rebelled against Hulme's tyrannical ways.  He jumped ship with the Church of God, A Family Community (Father's Call) in order to establish true doctrines and to provide a safe haven for true believers damaged by Hulme.  That fledgling little group soon had issues of its own within a few months.  Ted Budge then stabbed those people in the back and jumped ship into United Church of God where he remained as a minister. Four COG's later and four different issues of disloyalty the UCG embraced him with open arms.


Our approach, as described herein, is the ONLY safe approach which ALL Church organizations in the Body of Christ should take, because only then true unity in doctrine and administration can be achieved. To just give one example, it is simply not acceptable that one organization disfellowships a person for Scriptural reasons (compare Matthew 18:17-18; Romans 16:17), and another organization, claiming to be in the same spiritual Body of Christ, embraces him or her with open arms, without even inquiring into the cause of the excommunication. Another unacceptable policy prevails in many Church organizations which sanction and officiate over the re-marriage of divorced persons in their fellowship who are still married in the eyes of God, since God had bound their marriage (Matthew 19:4-9; 1 Corinthians 7:10-15) and no subsequent biblical grounds existed for divorce and re-marriage. Such conduct gives some of the many reasons as to why there is no unity amongst many Church groups. Unity can only come through the working of the Holy Spirit, based on the teachings of God. How CAN two walk together, unless they are agreed (Amos 3:3)?

Norbert Link is just as bad as the other COG's he condemns. The hypocrisy of the COG leadership continues on unabated.  Meanwhile, the members continue to suffer and families destroyed all because of the fear based belief system that the Church of God continues to perpetuate.

Meredith we know; Pack we know; Flurry we know.

Armstrongism, if you ponder this statement from several perspectives, ends up being or being based upon spiritual identity theft. It is blatant fraud, and the participants all justify their identity theft based in self, or self's group having truth, or being the sole arbiter of truth. Every one of them, in their official communications, refer to themselves as being "God's Church", implying that all the others are not (and of course not one of them really is!).

Norbert errs in the first sentence of his mission statement, when he interjects the phrase "which were taught by Herbert W. Armstrong." There is an old saying, "Some follow the leader, while others are just following the followers." First generation, original source, is Jesus. Following HWA is following a moderately effective guru's interpretation. As an example, does anyone know of any references in the gospels to Manasseh and Ephraim? Is the phrase "lost tribes" even found in the New Testament?

Norbert is just staggering along guessing, just like the rest of them. That's why vetting doesn't matter amongst the splinter community. It's also why there is no unity.

I wonder how many of these "ministers" actually attended Ambassador College, assuming that is a prerequisite to holding a position in the COGs. Shouldn't we run out of them soon?

It is truly sad that all the COGs have done such a poor job of teaching the people that have attended with them for 20 years or more that no one in the congregations can be elevated to the rank of minister. Instead the COGs have to rely on former heretics who have apparently taught heresy for the last 20 years but are still more "qualified to lead" than any lowly member can ever hope to be.

Who in the hell is Norbert? Sounds like another wannabe who connived his way up through the ranks never accomplishing anything other than riding on someone else's coattails and proclaiming he has all truth.

When Norbert rejected Rod Meredith's authority over him, he didn't follow through with his logic and reject the ordinations coming from Meredith.

Yes, that makes him either a hypocrite or an idiot.

Church doctrine is listed in Hebrew 6 and not determined by HWA but by Jesus Christ.

The Painful Truth was ordained by HWA as the church that Jesus Christ founded. By snail mail I sat at the apostles feet as he taught me the various doctrines as taught to him by Jesus Christ.

It was Christ who taught me using Herbie as the apostle with a #2 pencil and a small scraps of paper along with a used postage stamps to bear witness to me that I am going to be a new apostle at some undefined date!

And not to be outdone by Passover Pack, my articles will be declared scripture upon the return of Christ to this Earth.

How humbled I AM!

I hear that he is jokingly called "COLONEL LINK" after the bumbling Nazi commander on Hogans Heroes.

All this stuff is man made. What's the difference if some guy (who had some guy lay hands him) lays his hands on you, or if you have some homeless guy do it? Both carries the same weight. A hyooman being put his hands on you. Meaningless! I am a hyooman being too. Therefore I could lay hands on myself and ordain myself to the rank of exalted Maharajah Poobah if I felt like it.

I had my dog lay his paws on me. Twice! Now I'm a prophet of the Lord Dog. My cat still treats me like shit. I guess he doesn't recognize my "credentials."

Connie, based on some of the other comments here, ESPN's Chris Berman might call him Norbert "The Missing" Link. :-)

The major doctrines of the Church are those, which were taught by Herbert W. Armstrong, derived from the Biblical teachings as followed by God’s faithful servants....

Mentioning Herbert Armstrong before the Bible and Jesus. All some of us need to keep some distance from this group.

YOU ARE TOTALLY DECEIVED BY SATAN JUST LIKE CATHOLICS AND PROTESTANTS;ARMSTRONGISM IS ABSOLUTELY RIGHT ON THE SABBATH AND HOLYDAYS;JESUS IS LORD OD THE SEVENTH DAY;PAUL SAID TO THE CHURCH OF GOD, "WHEN YOU KEEP THE FEAST OF PASSOVER AND UNLEAVENEF BREAD; JESUS SAID NO ONE GOES TO HEAVEN JUST LIKE ARMSTRONG SAID; THERE IS NO EVER BURNING HELL OR IMMORTSL SOUL JUST LIKE ARMSTRONG SAID; ARMSTRONG PREDICTED PEOPLE LIKE YOU--EVIL DECEIVERS WOULD RISE UP AS HE BELIEVED THE WORDS OF MATTHEW 24 BY JESUS--REPENT NOW BROTHER

The only deceived person I see here deceived is Joseph. He followed the sex pervert HWA and his foul doxtrinez. Norbert is as big a fool As Herbvert

The only deceived person I see here deceived is Joseph. He followed the sex pervert HWA and his foul doctrines. Norbert is as big a fool As Herbvert

There is, and can only be, one true church.