Rod Meredith's Legacy Summed Up In One Paragraph 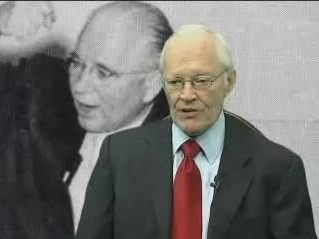 A comment from LCG Fails to be good stewards of God's money.


The thing to remember about Meredith and Leona McNair is that, although Meredith was a named defendant, WCG paid all of his costs, including the final settlement, which was paid in December of 1992. When did Meredith have his first GCG service? The last Sabbath of December, 1992. Meredith had spent 3 years and 3 months doing nothing while Tkach changed everything. No teaching, no writing, no preaching, no pastoring. Rod just sat there watching the church get destroyed. He had been trained for 40 years just for such a time, and when the people needed him the most, he was nowhere to be found. Just sitting and collecting a big fat paycheck and getting his legal costs covered, watching Tkach consolidate his power and change everything. By December 1992, it was too late to do anything. When it comes to money or faith in God, Meredith made his choice.

I don't see how it was keeping the Sabbath, when Rod demanded the whole church to fast on a Sabbath day for his healing. In his letter, he asked church members to meditate on his ailments. This smells of Star Wars 'The Force,' 'Luke trust the Force, let go.' How does people meditating on a idea, result in a healing? Isn't it God that heals, rather than meditation? It seems the big people are hijacking prayer requests, whilst the little people, especially the non boot lickers, are ignored.

It is likely that, just like some of the others, such as Dennis Luker and Victor Kubic, Roderick Meredith decided to hold fast that which he had until it became obvious that his income was threatened.

It was then, and only then, did he opt to strike.

Or so it would seem.

You have to remember, 4:30, that HWA, as an advertising man, set up or contrived all of the supposed "proofs" of what was supposed to be "God's church" and then presented his church as being the only church that met all of those criteria. Now all of the splinters use the same criteria and claim to meet them. Each seems to indicate that they are the one and only, and they all use the sabbath as perhaps the lynchpin.

We know that HWA did such things as watching Westerns on TV on the sabbath, and taking Dorothy dancing. So it is not unusual that Rod Meredith would order his people to afflict their souls on the sabbath on behalf of his health.

There is a great possibility that the sabbaths were lunar, ie, counted from the new moon, prior to the fixed calendar, which would mean that nobody even keeps the original sabbath today. Also, there is no New Testament commandment to keep the sabbath. The only people who are specifically said to have kept it were the Galilean women who interrupted their preparation of the embalming spices for Jesus' body to keep it, which was probably akin to Peter intending to simply return to fishing. Even Jesus left the sabbath out when enumerating the commandments. He and His followers were frequently at Temple, but this seems to have been to evangelize the Jews. It is not as clear cut as HWA wanted us to believe.

Armstrongism claims to preserve the sabbath, and that this is the key sign of God's church, but just as they claim to observe the dietary laws, they certainly do neither in accordance with the original Jewish understanding. That has always been an illusion!

7.07. BB, my understanding is that the ten commandments are hard wired into the creation. This includes the weekly Sabbath. When the Pharisees complained to Christ about His healing on the Sabbath, He didn't respond by pointing out that weekly Sabbath keeping was unnecessary. I disagree with you on this one. I discovered decades ago that if I rest one day a week, I achieve more for that week than I would have other wise. As I said, the Sabbath is hard wired into reality.