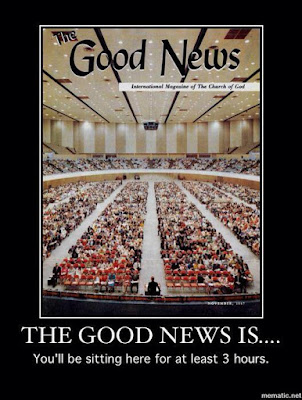 When I began to attend the Feast of Tabernacles, most days of it had just ONE service.

Those lucky people who had been in the "church" for a longer time could, and did, reminisce about years before when there were Morning and Afternoon services Every Single Day. If it was a Sabbath Day, they remembered, the speaker would, in fact, keep going in the afternoon until the sun actually went down. After all, what else besides hear more of "God's Truth" were we supposed to do on the Sabbath? Rest, maybe?

Those who had lived through that time expected you to recognize that having done that was some sort of Badge of Honor.

The game of Jeopardy:

Armstrongism for $20. What is a Gerald Waterhouse sermon?

Brethren, why are we here?