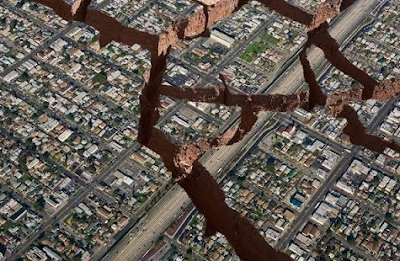 Jesus taught:
7 For nation will rise against nation, and kingdom against kingdom. And there will be famines, pestilences, and earthquakes in various places.(Matthew 24:7).

Though we will NOT have the earthquake of Revelation 16:18 as that happens during the Day of the Lord, that earthquake will be bigger than what the usual ‘experts’ have believed was possible. It will change the planet and humble parts of humanity.

But understand, that an earthquake that triggersa massive volcano, such as the USA has in places like Yellowstone and New Zealand has in places like Rotorua, can dramatically change the world. There isalso Iceland and the Cascades in the USA.

Well, no shit Sherlock!  IF it happens it happens.  That is the beauty of the earth expanding and contracting just as it has done for billions of years.  The reason we hear so much more in the news is not that more and more earthquakes are happening, but that the instantaneous broadcasting of news on the internet makes information immediately obtainable.

Earthquakes are sure to happen in 2019. just as there will be tornadoes, fires, droughts, famines, and other tragedies. And just because these things may happen does NOT make Bob Thiel a prophet.
Posted by NO2HWA at 10:39:00 PM

I find it curious that preachers of Armstrongism consider earthquakes and severe weather to be punishment inflicted on people who fail to become Armstrongites, or who are notorious sinners, rather than recognizing that the balance of nature is being altered because mankind is “sinning” against the earth, overpopulating, deforesting, fracking for oil, polluting the oceans with plastic, and releasing more greenhouse gases than the earth can handle. Those are the causes of the effects Thiel and others exploit and use to support their agendas. That most people are too sophisticated for Armstrongite manipulation today is the very reason why new members are not being attracted in the percentages and numbers they were in simpler times. GTA, with his visibility, did wonders for the emerging ecology movement of the 1960s, but lost his crediblilty, and that of some of his better ideas as a result of his moral failures.

Well Bob, living hear in Alaska earthquakes are rather common. 😶

I have found that a 6.9 quake is just a quake but 7 + is definitely from God as He tries to get our attention. Also, somewhere it is written that when these things happen, "see that ye BE NOT TROUBLED" but I guess not being troubled doesn't lead to our attention being gotten.

Anyway, expect blizzards in the Midwest and East in Winter. Expect constant rain leading to mold on roofs in the Pacific Northwest, or even sooner or later the Great and Next Cascadian Quake that God has to wait about 3 to 4 hundred years between "trying to get our attention", though we are getting close to being outside that window. I suspect when it comes, and it will, Bob will say it is because I live here as "an Apostate Former Worldwide Church of God minister." That will teach me and make Bob feel great. Of course if it happens to him in California, it will be Satan trying to stop his never heard of ministry.

I would have thought Bob would be compassionate toward people suffering trials, considering that God blessed Bob with a mentally and physically defective son. After all, if we were to apply to Bob the same standard that Bob applies to others, what would we conclude? We would notice that God cursed Bob with a special needs son, and we would wonder what God was saying to try to get Bob's attention. Is Bob's special needs son a sign that he should give up his pretense of prophethood and focus instead on being the father his son needs him to be? Or is it that his son is a sign from God that Bob's naturopathy is rubbish that doesn't lead to the best possible health? One way or another, by Bob's own standards, the existence of Bob's special needs son shouts powerfully from the mountaintops: "BITTER BWANA BOB IS NO PROPHET OF GOD!!!"

Serious Earthquakes?!?! As if all the past earthquakes that have occurred throughout the ages were NOT serious?!?!?

Maybe Almost arrested for Sabbath keeping doubly blessed Dr. from mail order degree mill Elijah prophet bitter Bob Thiel can make a cartoon of the serious earthquakes coming in 2019. His cartoon could, as his mentor Rod Meredith use to say, "shake the nations", with perhaps as many as 300 viewers or more.

Perhaps there can be a friendly "Continuing Church" competition. Who is a better Prophet - Cartoon Bob OR Real Bob?

It would not be unreasonable to also prophesy that sometime in his lifetime, Bob Thiel will become a climate refugee, and need to move his operation up to Oregon, which according to the models, will be one of the safe havens as climate change continues to impact planet Earth. Of course, he might continue to believe that outrageous weather and fires are punishment as opposed to realizing what is really happening, and may not seek out a place of safety for himself and his family. Difficult to tell at this point.

This information can be found anywhere online. The sun is beginning its cyclic solar minimum and because of that we are beginning to enter a period of global cooling. The earth mass contracts and walla, you have earthquakes and a increase of volcanic activity.

Its called science. Bob is attempting to exploit this for his own benefit. He is a fraud.

Since 2010 the number of USA earthquakes are down.

Well, he DID predict earthquakes in 2018. You posted that one.

The federal government (at least for the moment) keeps track of them - and sure enough, there were some. (The official government definition and Dennis's may vary.)

... releasing more greenhouse gases than the earth can handle.

Only a ridiculous fool whose sources are proven liars would say such a thing. The sources are obvious from the swill that comes from his keyboard.

For some real science, try the weather action website, or maybe climate audit, or friends of science. And no, none of them are financed by oil companies despite what the tin foil hat conspiracy crowd says. The evidence is in: the peer review process has be hijacked by liars who want grant money and globalists who want a global carbon tax system so they can set up a global system that controls industry across the whole world. Guess who will be in charge? Hint: it won't be democratic.

Good for you. You think for yourself and don't go along for the pseudo science ride.

IM A PROPHET TOO DEPARTMENT! ...

I predict that ALL of you will be taking a "breath of air" in the next 5 minutes, guaranteed!

Map of California fault lines. Use + and - to adjust map. Bob might want to move.

It would not be unreasonable to also prophesy ...

So, is that a prediction or not? Sounds like weasel words to me. Are you sure your real name isn't Gerald Flurry? If you know what you're talking about, just say "Thus saith Al Gore" or "Thus saith Climate Change". But you don't really know do you? So much for your science.

...that sometime in his lifetime, Bob Thiel will become a climate refugee

Name ONE proven climate refugee from anywhere since the last (naturally occurring) ice age. Such persons do not exist. Fake science! Pure speculation.

... and need to move his operation up to Oregon, which according to the models ...

All the models are "running too hot" according to ... climate change proponents! That's another way of saying they are junk science.

... will be one of the safe havens as climate change continues to impact planet Earth

As John alway says, “Time will tell.”
Hope you and your family are prepared!

IM A PROPHET TOO

Back in high school a classmate told me he could use palmistry to tell my future. After appearing to study the lines on my hand, he predicted, "You will die one day".
I feel a lot of Bob's adventures in prognostication are just as useless. Just as the cause of my eventual death may be determined by autopsy, Bob explains after some unpredicted significant event why he thinks it happened - for example, drought, fires and floods in California were said to have occurred due to LGBTQ-related legislation.

mankind is “sinning” against the earth

Some years ago some climate analysis from PennState had a cause and effect diagram linking current trends with present and future outcomes. I thought with some changes in wording that diagram would be ideal for one of Bob's articles.

In Bob's sixth anniversary sermon he mentions a certain "anti-COG" site that picks on him for using "maybe", "perhaps", etc in his pronouncements...

For any still undecided on the climate issue, all you need do is go to

There, much to President Trump’s chagrin, you will find all of the evidence collected by the best of the best scientists. Climate change is real, and many of its effects and impacts are able to be diminished by humans. There is a subset of former Armstrongites who don’t want to go from the continuing saga of 1975 to recognizing that there exist other existential threats. I get that. We’ve also encountered people who don’t believe there could be an international economic meltdown, or another global disease epidemic that could wipe out bilions of people. These things are all potentially very real. They just don’t have the meanings that HWA attributed to them. It is not tinfoil to consider them, and to do our best to combat or prevent them.

With Trump we have an irrational man who believes in free enterprise without limits except for Amazon.
The next President will be an irrational woman who believes in socialism and free healthcare and education with money sources unknown. (Most of the billionaires vote Democrat and the middle class does not have enough money to pay for this.)
Which is worse? We will find out unless Germany decides it is Assyria and miraculously gets enough arms to destroy us first.
Maybe Bob can find a Catholic prophecy that covers this, or maybe Flurry's prayer rock will learn to speak.