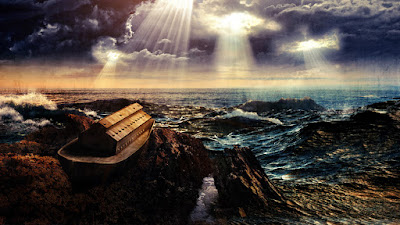 God's most mighty endtime Chief Pharisee is letting the world know today just exactly what happened during and after the great flood.  For some reason over the decades many Church of God leaders thought they knew everything about the flood and pre-Christian history, even though not a single one of them was a geologist, anthropologist, paleontologist, historian or legitimate theologian.  That though has never stopped the endless stream of know-it-all's pontificating on their immense treasure house of knowledge.

Today, James Malm weighed in on the great flood from Genesis.

The ice ages are a complete fabrication by men, and instead, the sloshing of water due to earthquakes carved out the canyons of the earth.  Instead of ice slowly creeping and receding over the earths surface, it was this sloshing that created the appearance of what ignorant men call the ice age.  Those layers of sediment that record the history of life...sloshing did that too.

Ancient civilizations are covered now with mud under the sea....many of them....more than we can imagine.

After 40 days and nights God began to stop the rain and close up the fountains of waters; and the waters began to slowly recede over the next 110 days so that the water level had fallen significantly.

Besides the depth of the water, there would have been great earthquakes opening and later closing the deep aquifers of water inside the earth.  Such massive violent earthquakes would have displaced water causing a great sloshing back and forth of billions of tons of water carrying  rock and debris, which would have grooved the ground giving the appearance of ice ages and piling up huge numbers of bodies in various areas as we see in the fossil record today.

The ancient pre-flood civilizations would now be buried deep under the sea and probably under many feet of mud at the bottom of the sea  today; the legend of a pre-flood Atlantis world may have been based on these facts. 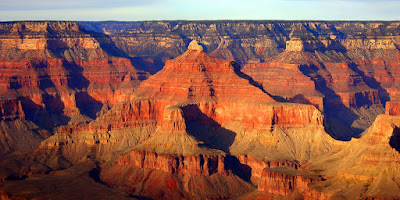 The Chief Pharisee also knows exactly how the Grand Canyon was formed.  Everything you have been told about it in the past is a complete lie.  God's most important man knows the REAL story!

Then three months later on the first day of the tenth month the tops of the mountains became visible as the water continued to recede.

These were the mountain tops seen by Noah; huge mountains were also being up-thrust around the earth but were not seen by Noah being great distances away.


During this time some of the great canyons of the earth were formed, as up-thrusts of land caused billions of acre feet of water to suddenly rush off the up-thrust land, like millions of high pressure hoses; the water rushing downward to lower elevations; just like during the creation week.


No, the Grand Canyon did not take millions of years to form; it took months, as water ran off when the area was suddenly thrust upwards as God resurfaced the earth; thrusting up land causing vast quantities of water to run off at tremendous speed and pressures.


This present world with its high mountains, hills, valleys and plateaus was formed by God via this flood, and today’s world is quite different from the pre-flood world.


Did you also know that rainbows were not possible before the flood?  God's Chief Pharisee knows that answer too:

Then God continues to bring rain on the earth in place of watering the earth by mist and dew, which rain began at the flood; the forming of rain drops in the atmosphere would now refract sunlight through the large droplets and produce the rainbow. Pre-flood there had been no rainbow as there was no rain drops, only mist [condensing dew], which did not refract the light in that manner.


Humanity is so richly blessed to have "men" like James Malm, Bob Thiel, Dave Pack, Gerald Flurry and Rod Meredith in their midst.  All knowledge comes through these "men."  What would we do without them?
Posted by NO2HWA at 12:16:00 PM

Already doing JUST FINE without each and every one of them, thank you! Thanks for asking.

None of these church leaders has an education or background in the physical sciences. Neither are they adaptive, but rather mechanical, 'black or white' thinkers. When I joined the old WWCG, and initially approached a minister, I expected a Dr Phil type or even better advice. I quickly realized I was getting the sort of advice you would get from a young teenager. On reflection, it's what you'd expect. These people went to AC as young men, often teenagers, were made ministers, and treated with kids cloves by members. They don't comprehend the adult world or adult mindsets. They are mentally stuck in school yard. I have come to the conclusion that the frequent church saying that people go to AC to 'learn how to live,' is a deliberate lie to cover up the ugly truth. That is, believe the nice words rather than the reality.

This farce he has just outlined should cause people to deeply question everything else he has to say. Unfortunately, some people will believe the farce just because Malm keeps the OC sabbath and holy days on the days which he thinks they fall.

What would we do without them?

Can the FOOL James Malm really be this STUPID? Can people that hang on to his every word really be that STUPID?

Is this idiot too dumb to realize that if there really was a sudden thrust upwards of land that the water would also suddenly be displaced and not run off for a long period of time creating mountainous valleys and canyons. A sudden thrust will not allow for that to happen because the water is displaced just as suddenly. Any first grade child can figure that one out!


“Humanity is so richly blessed to have 'men' like James Malm, Bob Thiel, Dave Pack, Gerald Flurry and Rod Meredith in their midst. All knowledge comes through these 'men.' What would we do without them?”


All knowledge (all 18 bits of it plus details) already came through the apostle HWA. Now, all these new guys want to change virtually everything that HWA had taught, as if HWA was all wrong about all sorts of things. This is so confusing! Those guys initially said that HWA was right when they were trying to get HWA's followers to follow them, but now that they each got some of HWA's followers, they all say that HWA was wrong about all sorts of things and that you need to go along with their own ideas (Malm), pagan prophecies (Thiel), restored ripoffs (Pack), new revelation (Flurry), and doctrinal upgrades (Meredith). Maybe all heresy comes through these false prophets.

What is Malms explanation for the quantum "Black Hole" that exists between his ears?

Mentally ill Malm. Who by the way, thinks the bible is a book of science. Moron.

I have never been to the grand canyon but judging from pictures I have seen it sure looks like it was once covered by a large lake that receded over the period of hundreds of thousands or millions of years. Could it be that the canyon was once at a lower elevation and naturally was thrust upward by the natural forces of nature over a long period of years. It is widely believed that the Hymalayan mountains where once at sea level but where thrust upward by the collision of the Indian and Asian land masses over the period of millions of years.

Apparently, there is a mighty "sloshing" happening between Malm's ears.

(And the water seems to have "herbie crust" in it, that's created a sort of calcified crust in his brain's neurons, rendering him rather stupefied.)

Malm and Thiel should have sexual relations and have a baby together.

They will sprinkle a double dose of tmalmcom powder on it's butt and declare it to be the Two Witnesses.

I have hiked in the Grand Canyon. I'd highly recommend the hike to the Havasupai Indian Reservation. There are idyllic pools and scenic waterfalls in which to frolic. Looks like something right out of a movie set in paradise.

As for Malm, I seriously doubt that he knows the distinctions amongst igneous, sedimentary, and metamorphic rock. Geologists can read the layers which make up sedimentary rock just as effectively as botanists can read tree rings. Malm may not be able to hike that distance, but mules can be rented. It would be a very educational trip, and if he has an open mind, he would experience through his own eyesight that his theory is preposterous.

Malm:"...the forming of rain drops in the atmosphere would now refract sunlight through the large droplets and produce the rainbow. Pre-flood there had been no rainbow as there was no rain drops, only mist [condensing dew], which did not refract the light in that manner. !!![ONLY MIST,CONDENSING DEW]!!!"

Dear God, please stay in my heart but take my brain! For it causeth me too much pain!!

During the times I've hiked up and down the south rim of the Grand Canyon, I obeyed the rules and didn't disturb or take any pieces from the strata.

Now I realize that if I had stuck a piece of Bazooka Joe bubble gum on a rock on the way down, nutter Christians like Malm or Ken Ham would see it as proof that the Earth is only 6,000 years old.

Maybe I should also mention that I didn't take any of the geodes lying around. I was a "boy scout" about it.
(Tho I was never able to join the Boy Scouts since they had meetings on Saturdays.)

The problem with Malms Christianity is that he sucks people into a Pharisaic alternate reality. Time spent trying to determine the complex issue of holy days dates, can be much more profitably spent in other areas. In fact, no matter what topic a person examines, there are errors and distortions in the belief system. Malm and his disciples are better off reading books on assertiveness, and trying to master this precious skill, rather than harping on holy day dates. The churches have exercised their duty of care on this issue, and should be left at that. Squandering ones time on technical issues is condemned by the parable of the talents.

Pick a day---ANY day!
It's all good. That's how Christianity works.
In fact, picking pagan days that nearby populations use seems to be the most usual and successful way of choosing when a Holy Day needs to be.