The Rain Miracle in Area of Drought 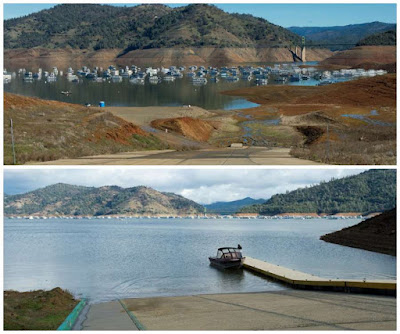 For the last 4-5 years California has suffered though a major drought.  Not that is new for CA, since almost the entire state is arid in climate, much like the Mediterranean.  For several years now various Church of God lying false prophets have taken great delight in the state experiencing drought.  In their distorted and vengeful eyes this is/was prophecy coming alive.  Rod Meredith, Bob Thiel, James Malm and others get so wrapped up in this doom and gloom that they almost go into orgasmic frenzies over "end time " events, and the drought was a sure sign that they have been proven "right."

As of right now due to all of the rain and the massive amounts of snow in the Sierra's, the state released information that the snow pack to 200% above normal.  Massive rains have hit a large percentage of the state and more is on the way.

Never once do you hear or read of a Church of God leader saying that they are praying for rain and when it does come do they ever claim that their prayer helped the rain come.  God usually is accused of delaying his punishment because the church was not yet ready, thus the state or country has received a small reprieve.

That is until now, though that rain fell on the other side of the world.

Almost-arrested, Elisha, Elijah, Joshua, Amos, Habakkuk, Second Witness, dreamer of dreams, doubly-blessed, self-perceived Mayan authority, naturopath, the bitter "son" Rod Meredith had aways wished for, prophet, apostle, and Chief Overseer  is now claiming one of his prayers caused rain to fall in Africa.  Toto, where are you when we need you?!


The first is that I had not received Aleksandar ‘Sasha’ Veljic’s report until last night and it had more information than the initial report (it reported that it rained more than it appeared from Pastor Ochieng’s briefer report). I prayed Monday that there would be more rain in Kenya and it seems like that has happened.

The greatest miracle for which I prayed in this country is – rain. I began to cry and pray to God for that miracle because there was nothing I could do about it, nor there is anyone who could have done anything about it. I asked God to intervene for our members have not been able to grow crops, many remained without seeds and some were facing starvation to death. So I began to pray for rain. And the first word that was on my mouth ever since I arrived in Kenya, the word that I so often mentioned was only one word – rain. On the Sabbath, I prayed with the small local congregation in Kitangala, nearby Nairobi, for the rain. On Sunday, as we were asking blessing for a meal, I mentioned rain. Ten minutes afterwards there came rain over the city we were staying in – Narok. In the following days it was raining everywhere. Even tonight, here where we are staying (Kissi town) we had a downpour of rain. Exactly what I asked God, everything happened when it comes to rain. I have tens of witnesses that it is true.”


The doubly-blessed prophet had announced earlier that one of his acolytes in Africa had prayed for rain and it fell almost immediately.  Now, the self appointed prophet has to get his own accolades in, Habakkuk Thiel claims that his prayer brought even more rain than was originally reported. His rain was even bigger than his acolyte.

The false prophet is bitter that no one believes his distortions!  Shame on all of you.  How could you NOT believe apostle Thiel?  He has told the 100% truth!

An apostate, former WCG minister (Dennis Diehl), posted this in response to me post Rain Miracle in Kenya?:

Weather is just weather and as sincere as one might be, humans don’t pray down rain unless it is going to rain anyway.

99.99% of Church of God members do not believe false prophet and teacher Bob Thiel either, and they claim to truly believe the Bible.  They do not believe because they have witnessed hundreds of lairs and false prophets claim over the decades that they could perform miracles.  Every single one of them have been liars. There is no COG prophet, church leader, apostle or Chief Overseer alive today that has performed any such miracle.