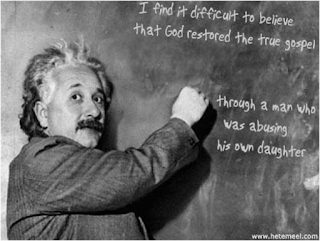 In a high school English class, we worked through a textbook titled, "Philosophy & Literature:  Truth, Beauty, Goodness, Commitment".  It opened with Plato's, "The Allegory of the Den"  which asserts that most individuals are victims of illusion when it comes to recognizing Truth.  At the time, I thought all of the time and effort spent on discussing what is or what isn't Truth was pretty silly, a waste of my time.

I knew the Truth, my family knew the Truth, after all our home was filled with stacks of the Plain Truth.  We had no question about what was true or false because we were members of "The Church", the one true church that Christ was personally leading through his sole end-time Apostle, HWA.  We had grown certain of this fact because HWA reminded us of it over and over again and we felt blessed to know THE TRUTH!  If his claims had not been enough, we were also living in a bubble where all those around us reinforced this concept with repeated expressions of gratitude for how 'fortunate' we were to know the Truth.

And, furthermore there were the booklets... Yes, the booklets.  My father, thinking he was doing us a favor, made a list of the 40 or so booklets that he had at the time and put columns for each one of us kids.  Well, once one brother started checking a few booklets off the list, we were all jumping head first into reading them as well.  It didn't matter what they were about, we were going to check off all the boxes. So, reading, "How to Quit Smoking" at age 10 didn't seem that odd to me.  Come to think of it, this may have been the most valuable one for me as it did make smoking very unappealing.  It's probably good that he hadn't included "The Missing Dimension in Sex" on the list.

To make a long story short, we lived in that bubble of common believers for decades without hardly having a clue that our reality was distorted in many ways.   Even with the distorted reality, our lives were pretty good, fortunately.  Most of our ministers were reasonable men and our parents maintained a balanced perspective on most issues.  They took us to doctors, they made their own decisions, they did not 'over-discipline' us, and they saved for retirement rather than giving all they had to WCG.  We also weren't pushed to go to Ambassador College.  Overall, we were lucky.
Nevertheless, my bubble eventually popped.  It wasn't one, dramatic moment but a gradual deflation that occurred for various reasons.  In part, the accumulation of so many inconsistencies between various teachings and between what was taught vs. what was practiced tended to make people like me become cynical.

You stop and think about it and realize that WCG had dogmatically taught us many things that were later changed, or once examined, proved to be completely false.  A few examples:

2.     HWA learned from no man and he restored 18 truths to the church

4.     HWA was given key to prophecy (Identity of Israel) from God

6.     The WCG was God’s government on earth; HWA was God’s sole end-time Apostle

7.     WCG was the one, true church and could trace its’ roots back through the ages

8.     All universities are bad because they turn almost all students into God denying atheists

9.     Members that were not donating enough money would go to the “the lake of fire”

10.  Petra was the place of safety, the final training ground

13.  Existing members would go to “the lake of fire”; existing ministers were deceived and rebellious

14.  Doctors, modern medicine, and make-up were; divorce was unacceptable

16. HWA’s marriage with Ramona was God’s will

17.  Divorce was ok, make up was a non-issue, and doctors and medicine were ok as well

18.   The State of California’s investigation into fraud was “the most MONSTROUS conspiracy and attack Satan ever launched against God's Work!”

19.  WCG knew what positions David, Moses, Joshua, HWA would hold in the kingdom of God

20.  God would not let HWA die before Christ returned; loyalty to HWA was paramount

21.   Post HWA, Mr. Tkach would lead us into the kingdom and loyalty to him was now paramount

One could have a lot of fun expanding such a list but better to get back to the point.  Other things that helped be "break the spell".  The continual splintering of the church.  After the UCG/COGWA split, it made sense to start digging around to try to determine, "What is wrong with us?"  Here I'd like to give credit to all of those that many of us had previously looked down upon.  Thank you to all of those that had caught on years before and then documented what had really been going on at headquarters to help wake up others and try to stop the idolatry of a man.  I read books like Armstrongism, Religion or Rip Off, Ambassadors of Armstrongism, The Broadway to Armageddon , Herbert Armstrong’s Tangled Web, and The Armstrong Empire and found websites like Ambassador Report, The Painful Truth, Banned, and Keith Hunt's).  I may have not appreciated some of the attitude and over-generalizations here and there, but the well documented history and thought provoking questions were eye openers.  It was time to put down the cool-aid, wake up and start smelling the coffee.

About thirty years after discounting Plato in my English class, I was ready to give him some well deserved respect.  I located the same textbook online and reread that introduction with new eyes... Yes, now it made much more sense.  The author summed up Plato's Allegory of the Den quite well - "If one has been a prisoner in a den, condemned to see only reflections of the truth, he will assume that these reflections are really true.  He will believe so firmly that he will  not believe a fellow prisoner who has escaped his bondage, has seen Truth, and has returned to inform the prisoners of their mistaken confidence in the "truth" of their shadow world."

Exactly!  Much like those of us in the past and those still in HWA's Den.

Truth is not always so easy to discern and any given statement is not the Truth just because an arrogant man is able to confidently claim that God revealed it to him.  However, now comes the hard part... What of my beliefs are true and which ones are false?  When a man borrows from others, he may be borrowing truth or he may be borrowing lies.  Most probably, he will have borrowed some of each.  But for those who lived in HWA's Den for most of our lives, it may not be easy to rapidly discern one from the other, nor to recognize what part or our confidence comes from our present examinations vs. our bias from the indoctrination of the past.

I must admit that when I read the Bible, keeping the Sabbath still makes sense to me.  Is that because of what the Bible says or because of my decades in WCG?  Hard to say at this point.  Like Ian, whom I respect, my overall experience has been good and I'd like to think that there is a way to make some of the basic teaching work without the corruption of the past, and most certainly without relying on or giving credit to one man.  My wife comes from a primarily Catholic country and her family had learned of the Sabbath and Holy Days completely independent from HWA, any COG, or even another splinter from the Millerites.  Just the Bible.  Is this belief Truth or error?  One day it would be nice to know for sure.  It is easy for her to ignore HWA completely.

For me, it is more complicated.  Reading HWA's own writings led me to conclude he was not sincere as others continue to believe.  Therefore it is hard to accept the position that even though HWA was incredibly flawed, God still worked through him to reveal new truth.  I could better understand that a man was going to profit from the ministry (as many do) and he got lucky with a few things that he borrowed from others.  To me, there is a big difference between these two assumptions.  A question for my friend Ian.  Hypothetically, what are the odds that a greedy, dishonest man who had abused his own child  would be the one that God would select to work with to reveal new understandings?  And for this case, the greed and dishonesty were ways of life, not just occasional slip ups.  And the abuse was not a single incident followed by acknowledgement and repentance but more along the lines  10 years of abuse during the critical, initial years of a 'ministry' while the revelations were coming from God... and followed decades later by an extremely odd gesture - the gift of a signed copy of the "Missing Dimension in Sex"  to the abused child).  Extremely unlikely in my view.  Perhaps I do need to visit you in Jamaica where we can talk face to face as we adjust our eyes to the true light outside of the Den?

God has choices.  It seems that, in terms of character, it is reasonable to assume there is a type of Bell curve just as there is for intelligence or physical agility.  Nobody is perfect for sure but there seems to be those we can confidently identify as being above average and others that are below average.  Doesn't it make sense for God to select an individual with above average character rather below average?  That would be consistent with the Bible's instructions when it comes time to select deacons and elders.  As a parent, I'd place anyone that abused their own child, lied to and stole from the poor to enrich themselves, and made repeated huge false claims about their own purpose and abilities well towards the left end of the scale.

There is a lot of gray in life but child abuse by a self-proclaimed Apostle of God seems to be one matter that remains in the black or white category.