Public Is Getting Sick of Restored Church of God's Web Advertising


There have been lots of discussions on various FB pages and elsewhere about the incessant advertising of Dave Pack's cult popping up on web sites as advertising.  It is starting to create a backlash against David C Pack's cult. 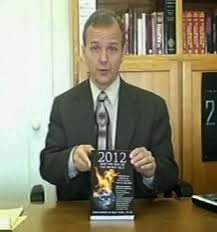 If you thought things couldn't bet any crazier in Theildom, think again.  Thiel is making a claim that Dibar Apartian wanted him to whip the LCG headquarters into shape.  Thiel was supposed to weed out false doctrine and teachings in order to bring the truth back to LCG.

Thiel even goes as far to claim Apartian thought Thiel should be leading the Living Church of God!

This just adds another dimension to Thiel's illegitimate claim that he is THE anointed heir of the message of "god."  It just adds more fuel to the intense hatred he has for Rod Meredith.  Mededith's rejection of Thiel has been a devastating blow to Thiel's ego and self worth.  He has never been able to recover from that rejection.

Yet, prior to the GCG split, Dibar Apartian expressed his opinion about various actions and decisions that the then presiding evangelist Roderick C. Meredith made that he did not care for.  Dibar Apartian personally told me in late 1998, that he told Dr. Meredith if he ever did something like this again that he would not follow him into another organization.  This clarified, for me at least, some of his views of Dr. Meredith.

Dibar Apartian was disappointed with LCG's Tomorrow's World magazine.  He stated it lacked interest, depth, and relevance.  In 2007 and 2008, he pushed Dr. Meredith to agree to have articles in it from me as he told me that my articles were what LCG needed.  Dr. Meredith agreed at the time.  I agreed, but under the proviso that LCG would first fix errors in its booklet on church history as I did not want to have LCG publish more materials that contradicted others.  Although LCG leaders agreed to do that and told me on numerous times that they were working on it, it never happened as various ones promised.  The reality is that one of the top people did not want the magazine changed. He also prevented the booklet changes from being adopted as a reason to not have me submit articles.

Despite this, Dibar Apartian frequently used to urge me to try to get the other leaders in LCG to correct various historical, doctrinal, prophetic, and literature errors.  Although I tried to get him to do more of that himself, he always instructed me to not only do that, but to remind other leaders in Charlotte to keep their promises to fix errors, literature, etc. Which I did. He did what he did differently to try to affect change.

Dibar Apartian indicated to me, multiple times, over the years that he wanted me to lead needed changes in Charlotte and I tried for years.


Thiel then adds this odd statement:

In one of our last conversations, he concluded with the words, "I love you." I was emotionally touched.

Dibar Apartian: HWA Was Against Meredith Being A Church Leader And That LCG Is NOT A Godly Organization 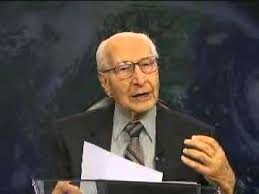 Things have never been rosy in the Living Church of God headquarters in Charlotte, North Carolina.  Power struggles and dissension have always plagued the organization since Meredith split off from two previous COG's..

Bob Thiel, leader of the greatest COG to ever to exist in human history, has an entry up today that he claims was sent to him by a former LCG employee in Charlotte.

Of course this sets Thiel into orgasmic fits of ecstasy that he can discredit Meredith and crew further.  The more he can smear Meredith the more he thinks people will flock to his personalty cult.  Except they aren't......Thiel's visions of grandeur are just as stupid as Dave Pack's.


I just wanted to write you about Mr. Apartian and what he REALLY felt about LCG and its leaders.

I know that Dibar Apartian expressed serious concern for the LCG brethren, as he made comments about the "true colors" of LCG's upper leadership would come out after his death-which is exactly what happened.

Mr. Apartian told several LCG members, whom he trusted, that LCG was no longer God's true Church, and was no longer even a Godly church.

Mr. Apartian also knew that Herbert W. Armstrong was vehemently against Rod Meredith being the human leader of the church. Mr. Apartian always felt uneasy about following Rod Meredith, since he knew HWA's feelings about that.

However, due to his rapidly failing health and a few other reasons, he stayed with LCG.

He did make it very clear though, that LCG was heading the wrong direction, in terms of doctrine and other major decisions as well.

Mr. Apartian was also very upset about Rod Meredith's lack of compassion and concern for him, while he was near his death.

Rod Meredith had heard about some of Mr. Apartian's revealing comments about LCG, and Meredith was not happy.

The false prophet and Chief Pharisee of Armstrongism is painting a dire picture of the soon coming destruction of the U.S. and Britain.  A lot of this destruction will come from rampaging immigrants out to kill white people.  In Armstrongite mythology this will be blacks and Mexicans with a few Muslims thrown in the mix. This is typical Armstrongist bullshit that comes from the racist beliefs fostered off in the discredited and illogical cult belief of British Israelism.

The next point is that those killed by the sword need not all die instantaneously at the same time.  There may well be nuclear strikes on key sites and bases, but very large numbers will be killed in internal conflicts.

Today in America and Britain almost half of their populations are made up of large minority groups.


Remember the race riots of the 60’s and factor into that equation; drought, mass famine, thirst in various areas, hunger and disease in the starving population.; causing people to struggle for the available resources.  Not a pretty site as great riots will erupt with the have not’s seeking to take what little the haves have.  Very many will die in these internal battles and such riot’s will increase as the necessities get more and more scarce over 3 1/2 years.

Not just nuclear strikes but the collapse of the economic system will prevent the import of needed fuel and food during extreme drought conditions.  Many will rise up to try and take for themselves as governments fail to cope, making the situation even worse.  Then in the extremity the governments will have to shoot looters on sight.

These riots will further disrupt any remaining distribution centers and overwhelm medical facilities, which will already be overwhelmed by a weak population being afflicted with many diseases.


A starving population will be afflicted by diseases such as influenza, or one of the more modern diseases, possibly mutated by a few nuclear explosions would bring on mass epidemics, and depleted medical facilities will not be able to cope;  hence massive deaths from disease and pestilence.


Pestilence is the crop eating insects and rodents eat the remaining crops in the fields and will enter the storage bins and eat up much of the stored  grain while spreading disease as well.


The rampaging Germans/Muslims or whoever the latest boogeyman is will demand that all US citizens turn over their food.


Malm's god has also be restraining huge earthquakes and volcanoes in California and the West.

Along with these things God has been restraining massive earthquakes on the West Cost and in other areas.  When that restraint is removed the already long expected Big One will probably come and major earthquakes could also come in the Easy central region.  The danger of an eruption of the Yellowstone system which could devastate as much as 20% of the United States is very very great.


An eruption of the Yellowstone volcano could affect three quarters of the US. The greatest danger would be within 600 miles of the blast where 90 per cent of people could be killed. Large numbers of people would die across the country after inhaling volcanic ash. Inhaled ash forms a cement-like mixture in human lungs.  Some articles on the Yellowstone volcano.


I cant imagine a life that is filled with this bulllshit on a daily basis.  These kind of miscreants find no joy in life or the creation around them.  It's death and damnation that excite them. Its no wonder that the 700+ splinter personality cults are dieing internally.  When this is the crap that members have to listen to day in and day it what hope is there left in the church?

You can read Malm's silliness here:  The Great Tribulation: What it Will be Like: Part 2

United Church of God and It's Culture of Division 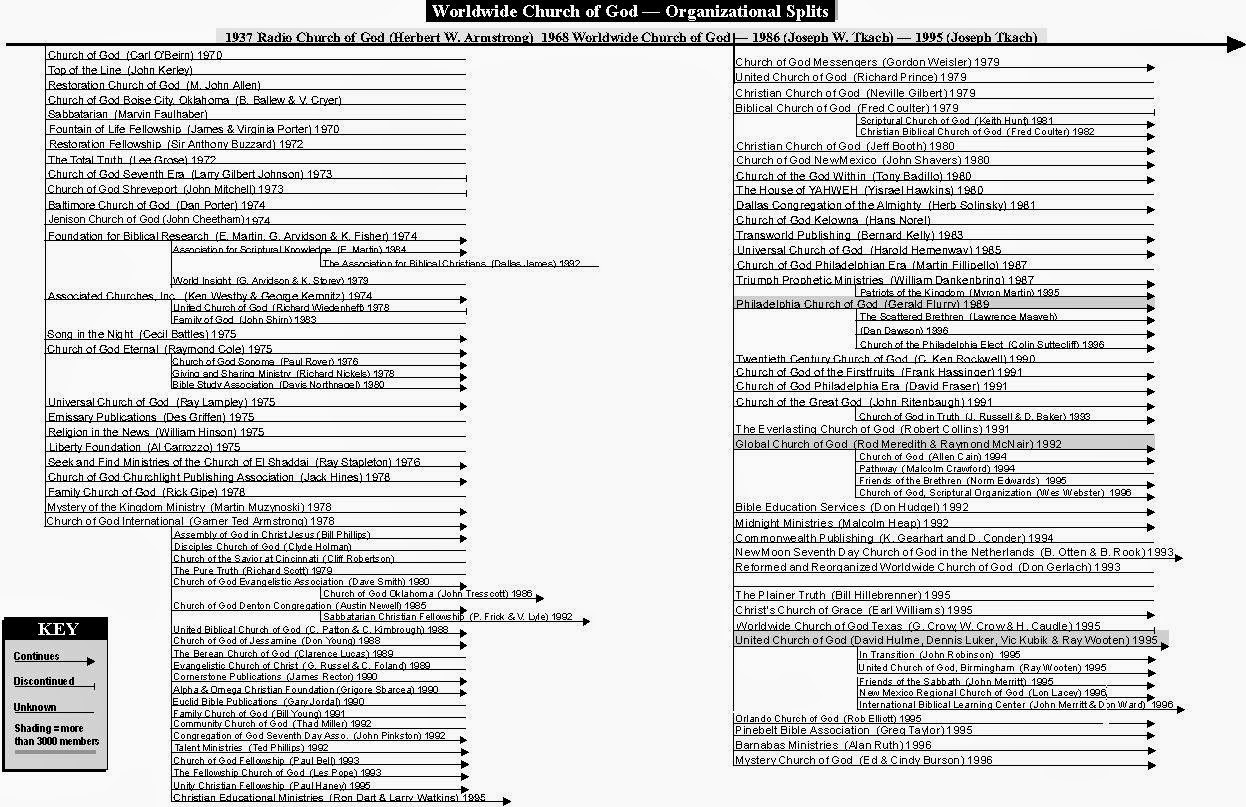 Double click to enlarge
Keep in mind that this list is from 1997 and that
there are hundreds more splinter personalty groups that have emerged since then.


From a reader here:


Clicked through on Dixon's site to the old articles under the "In Transition" section -- the forerunner of The Journal. There's an article posted from the August 1995 issue that is an interview with David Hulme. He was president of the new UCG at the time:

If you scroll down you'll find this interesting quote:

"We'll only break up into arguing factions if God's Spirit is not present."

Wow. Guess that's one quote the UCG/COGWA groups would rather not recall.

By that standard, it's quite an indictment that UCG has, indeed, broken up into many arguing factions over the years.

It's remarkable: For years, we always heard the question asked, "Why so many denominations?" A look at the history of Christianity shows that church group after church group divided and went their separate ways because of various differences of opinion. But we in Armstrongism were quick to condemn that as evidence that these were groups of men, not of God.

Now, 20 years after the WCG's breakup, splits and breakaways are accepted. "As long as we keep the Sabbath and Holy Days," people say, ignoring the reality that careful observance of those things has not, historically, produced peace. It's reminiscent of the late '70s, when HWA loved to proclaim how there was finally real peace and harmony at headquarters, even while the people who worked there knew better.

One could say that Hulme set the stage for the UCG's splits when he was quoted in the article as saying that United's significantly different form of government was better suited for modern times and was a departure from HWA's form of government, which was more suited to a "military structure" of the mid-20th Century. It's also ironic that he talks about listening to people, something UCG and its offshoots haven't really been prone to do.

"We'll only break up into arguing factions if God's Spirit is not present." I wonder what he/they would say today?