Dave Pack: In His First Kingdom "The women are in the background. The world is not ready to see you ladies..." 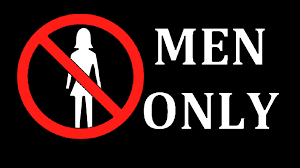 The curse of Eve, always behind the man/boys of the Restored Church of God

Now, it’s interesting. The women are not mentioned yet. This does mean males…This is not salvation, where the women have the same power as men. That could be just a few months out. There’ll be no difference. Salvation for women; come to awesome power and authority, just like men. Don’t doubt that. But it’s interesting, one other important side point, the men are singled out. The women are in the background. The world is not ready to see you ladies, when God unveils you in final form.

But the men are the ones who are going to go and shepherd the flock of God. That isn’t something that women would do. So it helps you understand that there’s an emphasis on the men. You’ll be just as escaped as they are. You’ll be playing important roles, all over the world, in the background You’ll be helping, and nobody can lay a glove on you either. Now, it could be a special emphasis on certain men at Headquarters, or the ministry. Everybody’s role is going to be different and I’m going to come to that in a moment. But it is interesting, it could almost be—I’ll throw an interesting side, kind of side point.

Anything That The Restored Church Of God Teaches, I Am In Complete Agreement.

RCG teaches that you should give 10% of your gross pay for first tithe, and save 10% of your gross for FOT and give any residual to the "church", then give as much as possible for 3rd tithe (10% is requested) for widows and orphans. And don't ask how the money is used because it's nunya. You agree with that? Put your money where your mouth is, troll.

"Tithing is different! Since tithes belong to God, once they are paid, God (or His representative" [Dave]) "is not obligated to explain exactly how, or in what fashion, those tithes were spent. One should never pay tithes to God’s representatives and then feel a need to supervise or otherwise have the duty to watch over the way the ministry or headquarters spends those tithes. The minister—ministry—headquarters answers to God because it is God who employs them, not the people who paid the tithes. God (Dave) owns His “company,” and He (Dave) has the authority to hire (or fire) His ministers. The people who pay tithes have no voice in how they are spent."

hey john, i have ocean front property in Arizona, would you be interested......lol

Dave Pack likes to surround his self with boys and young men.

Some Bot said:
The minister—ministry—headquarters answers to God because it is God who employs them, not the people who paid the tithes. God (Dave) owns His “company,” and He (Dave) has the authority to hire (or fire) His ministers. The people who pay tithes have no voice in how they are spent."

Hooooly Shit.... That's all I got. Well too and this. There is no real God that needs money or employs humans. You're better off throwing your money up in the air and let God keep what he wants. What comes down is yours.

Well, the Western world was getting better and better for thousands of years, until the women took over and it has been all downhill since then and Western man is dying off. The greatest and most accomplished race of all time came to a hasty end as soon as the women got in charge and stopped having babies. Murder (abortion) is up, the IQ is down, the birthrate is down, and weirdos like punk rockers, potheads, gays and transgenders have never had it better.