Eric King: ET Is Real! The Government and News Media Ignores My Truth! 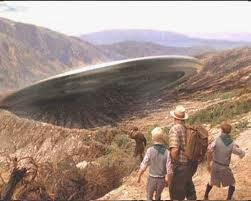 Mr. Eric King, the Mr. Know-it-All of Armstrongism now claims to be the worlds foremost authority on UFO's and extraterrestrials.


If the people on this planet knew exactly the extent of what was truly going on just outside earth’s atmosphere they may go into total shock. The United States government has tried to “keep a lid” on what is going on but they can no longer do so. The truth is out there. I wish to share just a little of what the true Worldwide Church of God [COGSR] knows regarding this important issue. Many of you know that COGSR has an extra department dedicated to studying science in light of God’s word. This department is known as “Science of Christian Thought” or SOCT. Much research has been going on in regards to understanding the Human Potential and the human brain. In the last two years we have been looking closely into the UFO phenomenon and we have even picked up good connections….people who have been studying this type of stuff since the early 60’s.-

What I am about to share with you cannot be proved and the news media has tried to ignore the facts all together. So let us look into this subject and get some clarity.

Most people think that if a person talks about UFO’s they must be a little crazy. It, like true Christianity, is not much for conversation these days. The facts show that there is indeed UFO activity in earth’s atmosphere and just outside earth’s atmosphere. NASA has documented much of this activity for a long time. During World War 2 many unknown crafts were spotted by fighter pilots doing things that the human technology of the time could not perform. Every country has reported such activity. Militaries from all over the world have documented such craft in their own air space.-


Eric's god did not know exactly how to create perfect humans so they could become god like he was.  God had to experiment on how to create.  Lots of mistakes were made till he got it right.


God began to create many life forms over a long period of time. The angelic beings [IB’s] who once had the opportunity to inhabit glorified bodies and take care of our planet were now left going through the process of exchanging body for body and witnessing the effects of their sinful rebellion.-

The angelic beings wished that they could have remained the care takers of creation. About 47,000,000 years ago God created the lemur-like creature. These had forward facing eyes and were small little fella’s. They loved to climb things. And then about 30,000,000 years ago monkeys of all sorts were created. God placed most of them in what latter became South America and Africa. These creatures had hands and feet and good brains. The angels were hoping that God would create a more usable body for them.-

About 7,000,000 years ago God decided to create some very interesting beings. He created Sahelanthropus Ttchadensis. We have given this species the nickname “Toumai”. These creatures were the first to look like modern man in many ways but still fell short. These creatures exited for some time and developed a form of communication amongst them selves. God was taking pleasure in all of His great acts of creation. God loves to create! God can manipulate His laws and construct how He wishes. One thing to think about while contemplating all of this is the fact that God is using four material blocks to do all of this creating. These four blocks are; up & down quarks, electrons, and neutrinos. That’s all! Wow!

In Eric's world, the earth is millions and millions of years old - at least he got that part right!

We learned that after this event God continued to create through additional periods. At the end of the KT extinction event God proceeded to create. We can start this new phase of creation with strength around 47,000,000 years ago. This brings us up to the last ice age which ended roughly 10,000 years ago. We understand that the first 4000 years of this time helped melt the ice and prepare the way for the Garden of Eden and the creation of the most recent and last human couple, Adam and Eve.-

Eric's fallen angels have been kidnapping earthlings and takingthemto other worlds to help populate the planets:

Now the Scriptures teach that mankind was “made a little lower than angels”. The angels are a bit more intelligent than we are. As a matter of fact we like to call them I.B.’s (Intelligent Beings). Of course the fallen angels have used their intelligence for the wrong purposes. Some of these fallen beings are taking life [from the Extractors Class] from our planet and are now “seeding” other planets for their use. As a matter of fact, there is a constant “coming and going” of craft to our planet.-

Eric's god is coming soon and only his group will be sought out by God and translated away because they are sooooooooooooooooo enlightened..

When it comes to the end of our planet Jesus Christ will send His angelic beings to gather His elect…the enlightened ones. Only those humans who have been “seeded” with the Holy Spirit will be allowed to enter the beginning of the restoration of our planet.-

Eric also wants you to know that he and only he has the REAL truth about UFO's. He knows the kinds of propulsion systems they use to fly their crafts with, how fast they fly, that President Regan was afraid of them and that they are here to be worshiped.

So what have we here at SOCT learned in our studies regarding the physical manifestations of this UFO phenomenon?

2-These craft are using a special type of nuclear power (perhaps nuclear fusion) and are using Hydrogen and Helium propulsion systems.-

4-Any being can survive any ‘G’ as long as the duration is extremely short.-

5-Most all of these craft are inhabited and are using electro magnetic charge systems.-

7-Craft have been witnessed traveling 1800 miles an hour and making up to 2200 mile an hour turns.-

8-Some of the fastest speeds are around 7000 and then able to “stop on a dime”. Extremely fascinating….to say the least.-

9-After 1950 an increase in craft numbers and bolder appearances of the crafts began.-

10-President Ronald Reagan was concerned about the beings being hostile.-

11-True Christians have to deal with the fact of their existence.-

12-True Christians are aware that some of these beings are seeking worship and are the source of all false religion.-

This information written by and released into the public on February 12th, 2014 by;-
Mr. Eric William King [founder of COGSR & SOCT]

This is interesting science fiction, but somehow I never imagined that someone would base an ACOG on this sort of thing. Armstrongism was an exaggeration of Christianity. They took the most extreme parts of the Bible, demanded zero tolerance obedience, and added Herbert Armstrong's theories to those basic precepts. If we look at the ACOGs of today, we see that they are simply exaggerations of that exaggeration. Members are not allowed what we might call "line item veto". You either believe everything that is taught as it is taught by the "guru" in charge, or you are excluded. We call this "drinking the Kool Aid."

Imagine, if back in the days of HWA, someone had done the type of independent research which is common today on one of HWA's pet theories, British Israelism. I'm not talking about "proving" this theory to yourself by reading the approved church literature on the subject and agreeing with it so that you can be baptized, I'm talking about delving into real history, the scriptures on the topic that they never quote, and what legitimate scholars have written in rebuttal to the theory. The minute a member began discussing his independent findings with other brethren, or the ministry, he or (especially) she would be counselled, and most likely disfellowshipped. This is because the ultimate trump card, the only real authority "proving" this preposterous theory was that "Mr. Armstrong said it, and he's God's Apostle." So to question the very theory was to question the apostleship of HWA, the premise upon which the personality cult called WCG was built!

To appreciate the practical application of this, and how it actually persists today, all one need do is examine the recent troubles in the ACOG of David Hulme. Hulme was actually coming clean about British Israelism. But, the ministers with whom he surrounded himself simply wouldn't have it! Rather than restudy this completely extrabiblical theory, these men saw it as being part of the heritage of their faith, the key or tool to understand their nation's identity, and end time prophecy. Never mind that this had already failed in 1975, and the fact that the movement has been explaining it all away in the intervening decades and still expecting certain events to unfold that never will, these men saw it as being part of the faith once delivered not by Jesus Christ and the original apostles, but by Herbert W. Armstrong!

So, in a sense, though Eric King appears to have introduced something new that just smacks the senses, he is actually following a familiar pattern, one originated by HWA. This places him firmly amongst the other exaggerators, the ones who see themselves specifically in prophecy, the ones who give themselves Biblical titles, the ones who break secular society's law and go to prison.

Needs to join up with what's-his-name with Stargates under the ocean transporting demons.

No, we'd like Ewwww King to take the National Science Foundation Test and see how many (simple) science questions he gets wrong.

And even if he gets all the answers right, he probably will fail as to what is contributing the most to greenhouse gasses.

Next thing you know, he'll be saying that people living inside the hollow earth are coming out of the North Pole in their flying saucers.

Inconvenient, particular on December 24th -- air traffic would be quite problematic.

[Note: My crazy idiotic snide sarcastic hypotheses are every bit as valid as the kook morons of the CoHAM (but will admit they may or may not be as amusing).]

It's a demon flying a UFO!

I remember that during my HWA-era days in the WCG, ministers preached and associated UFO's with demons and their Satan from the pulpit, a bunch of times. Those teachings were actually quite effective in generating much buzz among the members, too. Many members were easily influenced by the sleazy sales tactic of being given the gift of 'special insider knowledge' that's only for "God's Chosen Ones"- those with the Holy Spirit, eyes to see, ears to hear, etc.
I've seen nearly identical UFO/demon teachings on popular mainstream Christian TV programs, too.
And, no wonder... That ridiculous religious sales stuff sells!