Samuel Martin on the Feminine Voice In Scripture 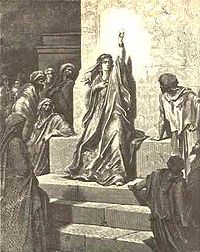 Samuel Martin (son of Earnest Martin, WCG) has a series of posts on his blog about the feminine voice that is found in a lot of scripture.  This is sure to gall many diehard Armstrongite leaders because God only works through men, at least in their eyes.


Yes, these books are known in ancient times by the Hebrew name, Megillot (meaning festival scrolls because they were read on specific festivals in the Hebrew calendar) and they appear in this order in the Hebrew Bible. We’ll have much more to say about this in future posts because I believe these books are full of feminine voices.
However, a major feminine voice appears in the book of Proverbs, which merits investigation. This text, in fact, is so obvious and presents us with an urgent blinking light telling us to pay attention, I think. So, of late, I’ve given Proverbs a fresh look and I am indeed glad that I did.
Before we get into that though, let’s look at this obvious text with a specific feminine voice. It is found in Proverbs 31 and I think it provides a type of a key of understanding.
No, it is not the “perfect woman” text per se that I want to draw your attention to. No! It is who the author of it is! The source of that section of Scripture is a woman! The evidence cannot be clearer.
“The words of King Lemuel. An oracle that his mother taught him:” (Proverbs 31:1 ESV)
Much more research is needed on this issue because not only did Lemuel’s mother teach her son some exceedingly beautiful and inspiring teachings, she did it in such a way that the English reader might not catch.

Now, if we take a look at this abecedarian poem in Proverbs 31 through Mediterranean eyes a bit, what we may see here is a glimpse of a song/poem that a mother made up for her son (which is exactly what the text of Proverbs 31;1 says) with the idea that it would help him remember the qualities of a woman that she hoped him to find.
And who better to know the desirable qualities of a woman than a woman herself? A mother knows and cares more than anyone else about the type of woman that their sons marry! This is especially the case in a patriarchal society where daughters would leave the home and join the families of their husbands whereas wives would enter the home from outside of the immediate family and become a part of a new family.
The investment and interest that a mother has over who her future daughter in law is in such a society is of prime importance because it is her son who will be caring for her in her old age as she will probably outlive her husband. So, this is no small point for the future harmony of households in ancient and even modern times.
Now, this is just a taste of where I am going with this, but in the next post I will do, we are going to look at Proverbs 1-9 anew.

Probably hundreds of years from now, students will discover similar women's voices through twentieth century rock n roll. Such songs as "Shop Around" by Smokey Robinson and the Miracles, or "Simple Man" by Lynyrd Skynyrd will fit the bill nicely.

Throughout most of recorded history, women have been the conscience of society, nurturing the next generation, and working for a safer environment in which families can function and thrive.

Yeah and look at them now, many of which have no qualms in killing their unborn.

What a difference a generation or two, makes.