Another Restored Church of God "minister" Has His "Eyes Anointed" But By What? 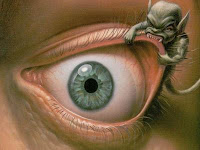 This latest Restored Church of God "minister" to admit that he the "anointing" of his eyes is Gene Zhorne.  He writes:

We eventually found The Restored Church of God’s website and the book “Anoint Your Eyes” on the “Why the Worldwide Church of God Apostasy and Splinter” webpage. One word: wow! We learned how obeying Christ’s command would give us clear vision to see the miserable state into which we had drifted—and allow us to recapture the portions of the Truth we had lost over the years.

As we read more of the book “Anoint Your Eyes,” we came to the sobering reality that we too were “wretched, miserable, poor, blind, and naked”—just as Christ said all of His people would become in the final era of His Church. This was a terrible shame on us before our Creator. Yet, our spirits were forged during this time of deep personal reflection.


Zhorne goes on to write about the subjects that are important to Packism:

To grasp all that it contained, we had to read the book a second time. One pass was simply not enough. We then went on to read The Government of God – Understanding Office and Duties, The True Church – One Organization, or Many?, Surviving Perilous Times, There Came a Falling Away, among many other books offered in the Splinter Explanation Packet (SEP).


For a group that claims to be Christian take a notice of the important topics that occupy this list. Nowhere do you see these sick little men ever talking about Jesus, the message he brought, the example he set, and the grace he delivered.  You can spend quit a long time on RCG's web site before you ever see them talk about Jesus.  There are hundreds of pages on law and commandments and other useless nonsense, but scant information about Jesus.  Jesus came to lighten the burden and set the captives free.  Pack and his sick cult are all about taking people hostage and imposing hundreds of rules and regulations.

Zhorne then makes in incredible claim that he is too blind to see how this perfectly describes Packism.


The Book of Numbers, Chapter 13 and 14, brings out an interesting parallel in the commandment that God gave to Moses. He was to select a man from each tribe to spy out the land of Canaan—the “Land of Promise.” They were to be “strong and of good courage,” and to bring back the fruit of the land, as well as a good report. Yet after searching the land for 40 days, only two men, Joshua and Caleb, out of the 12 who were sent, gave an accurate and positive report—that there was a land flowing with milk and honey. The rest were afraid of the land’s inhabitants. They lacked faith in God to fight their way into the land of promise. Because a different spirit was present in Joshua and Caleb, only they made it.


Pack and other deviant men in Armstrongism had a chance to search the "promised land" of God's unconditional grace and redemption for the milk and honey it gives to believers.  Instead these deviate men come back with law, government, rules, more law, and every kind of imaginable bondage they can weigh people down with till they are so burdened they give up hope and submit to their deviancy.

When will those that claim to follow Jesus start trusting in Jesus and turn their back on the dishonest, fearful and fear-producing deviancy of Packism and is small cabal of sick ministers?

Zhorne claims that listening to lies of those that speak out against Packism are destroying your chance for the land of promise.  I can state with absolute confidence that following the lies of these deviant men will destroy any spirituality that might be trying to break forth.

Just as God, in Deuteronomy 22:9, tells us not to mingle seed, neither should we mingle truth with error. The end result with seed is a greatly inferior, tainted product, and the same can be said of the beliefs held by human beings. Error, like leaven, eventually spreads throughout its host (Gal. 5:9). But unlike leaven in bread, the end result for one with God’s Spirit is that He eventually loses it, and with it eternal life.

I agree with Zhorne's comment above.  No one that claims to follow Jesus should  be mingling with the errors and filth that is Packism  It is an inferior, tainted product that is destructive to the core.


Yes, it is indeed sobering that 2,000 some people can prostitute their lives to one of Armstrongisms' most degenerate splinter cults.   Even Flurry and Cox, as mind numbingly stupid as they are, pale in comparison to these morons.

Suggest prescription lenses instead: That way you can read the proof that your little cult is wrong and useless and you can finally figure out that you are a total loser wasting your life on a selfish delusional false prophet with a terrible record of ministry, exhibiting not one shred of the fruit of the spirit.

Might solve the eyesight issue, but the fuzzy thinking is indeed problematic.

The Jesus of the Gospels does not exist for Dave Pack and the RCG agenda. It is Christ the ass kicking star of Revelation that motivates and endears the membership to Dave and Dave to them. Same for the Ron Weinland types and Flurry Followers.

The Jesus of the COG is the one to come and not the one that came. You have to look long and hard to find Jesus mentioned in any sermon title of Pack. It is always the hard headed Christ you hear about.

"Come unto me all ye who labor and are heavy laden...and I will fill your backpack with more rocks.." is the RCG and COG motto.

"For my way is difficult and my burden is heavy..."

Legalism sucks out your brains and crushes your spirit with narrowminded and never good enough nonesense.

"We were on the Internet day and night—like the Bereans “proving whether these things were so”—whether RCG is exactly what it claims to be." - Gene Zhorne


Yeah, I'll bet they had to go on the Internet to read that stuff. David Pack once flew into one of his satanic fits and shouted, "I have no use for former WCG people who request hard copies of my literature." Nobody is despised and abused as much as someone who went to the WCG and still believes some of it.

Also, the Zhornes were not so much like the Bereans. Spending endless hours on the computer, they were more like a couple moths fixated on a low-watt light bulb.

While David Pack hates sending out hard copies of his literature--even accusing those who requested it of "stealing" it--he does want people to send in their hard-earned hard cash. Now that is where the real theft occurs. Also, more yelling.

The "ministerial" types will have found another paycheck and another power trip, so they at least get something from going with the RCG. The little people get less than nothing. Much, much, much less.

The RCG does seem to have enough truth to sucker people in. Then, it has enough lies and evil to kill them dead. It is NOT "exactly" what it claims to be.

The picture describes perfectly what is messing with their eyes!

I am one of Mr Gene Zhorne's several former daughters-in-law. The poor man suffered a difficult, unfair and abusive childhood. He was not compassionate or very loving with his sons, in my experience of him, probably because he didn't know how to be.

While I repudiate all things WCG, I have to suggest that even the Jesus of whom you speak did not disrespectfully vilify other people.

I don't love Mr Zhorne, and I am not writing this to defend him. I haven't spoken to the man in many years. But I would like to suggest that your accusatory website makes you as bad as you accuse him and Pack and that whole ilk to be. "Let him who be innocent cast the first stone."

If you truly were a loving person, you'd presumably devote your energy to a more noble cause than this hate-mongering website. Get over it - the "church" damaged all of us who were "second generation" and probably our parents too.

It will be to your great credit if you allow this post to be published.