UCG Members Pray To Be Protected From "...these unsavory elements." i.e. COGWA Members 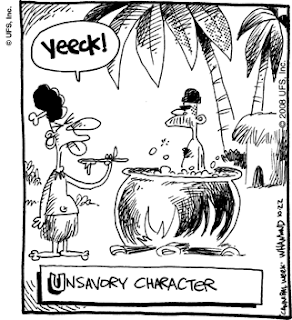 Here is more from the story about the Zambian cattle rustling episode with UCG  members and COGWA members.  Apparently the prayers of the UCG members to be saved and protected from the unsavory COGWA's inspired a cow to return home three times after a COGWA member supposedly stole it. Three times! There must be some prophetic interpretation as to that number.


We would like to update you about what happened with cattle stolen by leaders of a dissident break-off group in Zambia. Four oxen were stolen. One ox, called "Avilo" walked back to its rightful owner three times. The deacon of the break off group who took the animal finally gave up going after it.

People have asked, "what's the big deal with just a few cows?"  What many don't realize is that a four year old ox is a very valuable asset worth about two years income or more. The oxen were taken only from members of the United Church of God using the name LifeNets at a critical time of planting.  This was a warning to others who had been given cattle by LifeNets what happens when they stay with the United Church of God. We have asked the rogue director of LifeNets to cease and desist using the name LifeNets per an agreement we came to in 2004. He has refused.  For a while he changed the name LifeNets to "Life Shine" for an unknown reason, but has since changed it back to LifeNets.

This behavior is deplorable, but we are not surprised at the ethics of an organization that calls theft "growth" and  is seriously challenged by telling the truth. We know that in the end God will not be mocked. We thank all who have prayed for the safety of our people and for protection from these unsavory elements.

We are greatly saddened that what relationships we have built, what humanitarian work was done and funding we provided has been turned against us because of becoming embroiled in someone else's selfish controversy far way. We are happy to report a thriving church of 400 in Zambia that has survived nobly through God's Spirit and discerning brethren who have  become stronger than ever.  Again, we thank you for your concern and prayers.

"We are happy to report a thriving church of 400 in Zambia that has survived nobly through God's Spirit and discerning brethren who have become stronger than ever."


You are not supposed to spread false reports, much less be happy about it.


Too late. Much too late. Another case of unanswered prayers. Or, at least, answered with a "No!"

Some of the very worst dissident members came over to the UCG from the WCG back in 1995 and are now running the UCG and collecting paychecks.

They helped Joseph Tkach to change the WCG and kick out people who still believed what HWA had taught.

Now, they pretend that they "stood up for the truth" while they try yet again to carry on with the same sort of changes that they had helped to pull off in the WCG.

This is more evidence of the underlying pathology inherent in Armstrongism.

A couple of cliches come to mind: 1) {from their leadership perspective} The end justifies the means, and 2) {from a detached observer} There is no honor amongst thieves.

well look at the bright side, The ox that keeps coming home can be u used to haul the Ark of Covenant back from the disidents.

Members of Sabbath keeping Scientologists arguing over where's the beef and splitting their church.

It's called culling the herd.

Sounds like both sides are breaking the 10th Commandment: coveting their neighbor's ox.