Wes White: Mad At the System 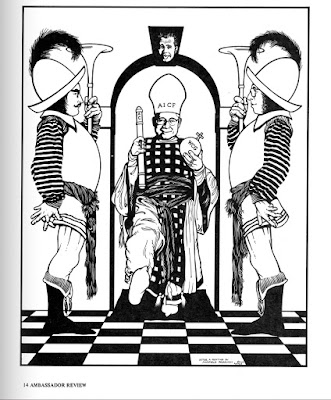 Mad At the System
By Wes White

There are many, many reasons why a lot of us on “Banned...” left WCG.  One of the main reasons for my departure was that I recognized the SYSTEM was bad!

The WCG system was an imperial dictatorship.  The system abused people.  It betrayed them.  It promoted lies.  It was based on the end justifies the means.

I have varying degrees of respect for those who left that organization because they recognized the system was bad.

However, when I look at guys like GTA, Meredith, McNair, Flurry, Pack, etc, I see guys who loved the system.  And they left it because they were mad that they couldn't be IN CHARGE of that system!

And most Armstrongite members are not aware of this because they don’t want to know.  A lot of these geezers love fellowshipping with their old friends from the old days.  Attending church services with other geriatrics is all they have to live for anymore.

Yes, Armstrongism is in a state of hospice.  “Let’s just keep the patient comfortable.”
Posted by NO2HWA at 11:55:00 AM

Armstrongism is a good candidate for euthanasia. Yes, the system was bad, but the underlying theology was very flawed as well. Like all fundamentalist sects, the problem starts with attitudes toward Scripture. When the Bible becomes an idol, when the Bible is THE SOURCE, when doctrines are established using proof-texting, you can pretty much guarantee that what follows is going to be a hot mess. Armstrongism defies logic, science, tradition, higher learning and common sense.

Armstrongism has always been a temperamental system. 50% temper. 50% mental. ;-)

However, when I look at guys like GTA, Meredith, McNair, Flurry, Pack, etc, I see guys who loved the system. And they left it because they were mad that they couldn't be IN CHARGE of that system!

The same could be said of Dave Pack. He chafed against the system and was perpetually in a BadAttitude™ about his seniors daring to correct him. Even after taking charge of his own system, he has rebelled against that system several times, rewriting rules so that the only real "system" that remains is: DAVE RULES SUPREME. Which in fact was the old WCG model: HWA RULES SUPREME.

Armstrongism is a good candidate for euthanasia.

Yes, particularly in the Philippines, a new younger generation of ACOG ministers is coming up in several Gentile nations formerly ruled by Israelite nations.

I prefer the "Sears Roebuck" analogy for the COGs.

Once a powerhouse and dominant market force, it refused to upgrade, plowed profits into questionable ventures and expansions, and then failed to recognize a changing marketplace and new generation of shoppers.

Like Sears, the COGs are experiencing a slow and inevitable death.

Yep Sears already kicked the bucket in Canada, they went bankrupt a couple of years ago and no longer exist here, such a shame as that was my go to store. If God can give us back Sears we'll give him the Churches of Armstrong; at least Sears served a purpose. I know, heck even God does not see that as a fair trade off as he doesn't want the CoG either. Well the members are getting old and dropping dead so hopefully the Armstrongite churches will vanish soon.

Christianity in general is in decline but the few churches that are doing well are those that appeal to young people and young families and are more modern and have a high visability in their communities. They also have a mainstream Christian theology. None of the armstrongite splinters come close to that description.

The Latest Living Church News is remaining true to the trend I have been watching for several years: 4 deaths to each birth in announcements. The horrible system is dying off. We will see if these ghouls succeed in brainwashing the Gen-Xers preparing to take over. If they do, I will do my part in assisting their crash and burn.

To learn to ride a bicycle, one must get on a bike. To learn to play a musical instrument, one must practice on that instrument. Likewise to mature, one must have self responsibility. That's the message of the parable of the talents. But in HWAs church and splinters, members are stripped of self responsibility, and instead have their lives micro managed by their ministers. This results in a church built on sand rather than rock. And when the structure inevitably collapsed, it was all blamed on Joe T and his helpers. This is simply defending the rotten system.

My experience was that many members loved the system. They aided and abetted the ministers in keeping their betters under his thumb. The ministers rewarded them by protecting them from their victims, a comfortable symbiotic relationship.

But things will never change. The reason being that those in charge are bullies, and all bullies were mentally trapped by their sinful habits and poor character. Once a bully, always a bully. That's the lesson from Christ condemning the cities that refused to repent after witnessing great miracles. Bullies essentially don't/'can't' repent. Technically it's possible, otherwise Christ would not have rebuked them, but it's rare.

Bullies can certainly change. It's just unlikely that they would be able to change while living in a culture of bullies like Armstrongism. Of course the whole bully thing is whitewashed and cloaked in HWA's concept of ruling with a rod of iron, but it still remains the same old bullyism. The doctrines, theories, and oral traditions of Armstrongism will always cause toxic behavior, especially amongst leaders and aspiring leaders. My advice to any and all still dragged down into this quagmire is to sublimate the bully concept into a one-time action item, mustering up all your strength, and leaving the group. Then, if you need to, find a less toxic culture.

The book 'inside the criminal mind' by Stanton Samenow gives an example near the end of his book of criminals who resolve to change their ways, and who do make progress. In the example given, they attend regular therapy sessions with a trained therapist, and it's an ongoing struggle for the participants. So yeah, bullies and criminals can change, but observing the world as is, it's the exception.

PS change doesn't mean that they will be a different person. The old ways will always be there, not far from the surface. It's the way the mind naturally works.

As to Rod Meredith, he saw that the problem with WCG was one-man rule, so he set up Global with a board to govern it. He soon realized, of course, that one-man rule is a good thing, as long as he is the one man, and left to establish LCG. Isn't that the way it is with every dictator -- Dictatorships are bad, unless I'm the dictator.

The system was from the tree of good and evil. Therefore it was doomed from the start. The splinters repeatedly try and regrow the system and blatantly ignore the tree of life way. The way being Jesus Christ.

actually, GTA was told not to come back...so he didn't have many options other than to start a new organization.

then, they told him to to come back too...

Yes, 10:32, this is why I've been stating on these sites for the past twenty years that we all require rehabilitation from Armstrongism. You cannot necessarily get back the full mental and emotional processes that years of their brainwashing and reprogramming take away from you, but you can through learned logic practice more normal habit patterns, approximating your pre-Armstrong state of mind. A recovering sociopath may never actually recapture genuine feelings for other humans, but through logic and "acting" can make it appear that he or she actually does have those feelings. In a way, it's not that different from what Paul shares with us about the inner conflict of his mind, what he knows to do versus what he naturally finds himself inclined to do.

Actually GTA stood up and informed the CGI ministry that he wasn't going anywhere and if they didn't like it they should leave. Two thirds or thereabouts got up and left. It took the other third approx two years to wrangle GTA out.


(should have been rendered "then, they too told him not to come back")