The desperate need to be recognized, authorized, validated, accepted, affirmed, endorsed, verified, approved, sanctioned and given the green light as to one's place in God's Eternal Plan in ministry, is an obsession we have seen play out over the years since the WCG implosion. The paths to authorization a many and creative. They also are invalid and concocted.

We have witnessed the men of renown, in their own minds at least, going to great lengths and repeatedly to prove that they indeed are anointed, called and set apart to be the Prophets and Apostles of the Continuing Saga Churches of God. Some refine their titles down to the new Joshua, Zerubbabel, That Prophet, A Prophet or The Prophet depending.

Dr.  Robert Thiel goes to yet another great length, and I do mean length, to reaffirm that the dreams he has had and others have had about him that he is the only known and valid prophet in the Churches of God today.  All sincere I imagine, but not credible.  "I had a dream" is a oft used ploy by those who either are willfully ignorant of the nature of dreams that we all have or are manipulative in a way that can't be tested but is simply to be believed by the gullible.

Dave Pack, as well we all know, is notorious for shifting the story and changing the game when it comes to title taking.  The man has justified the taking of every title there is and sees himself spoken of in scripture, which to me, is more a form of mental illness and delusional beliefs than anything close to a religious reality. The need to do so is both compulsive and ridiculous. However, Dave, unlike Bob Thiel who begs to be believed, simply states after hours of beating the minds of his seat gyrating members into mental and proof texted belief along with a bit of tale weaving,  that indeed he is an Apostle.  Where Bob Thiel seeks authorization in dreams and sketchy anointings, Dave simply declares it to be so.

Gerald Flurry also is a title taker along with Ron Weinland.  Gerald falls for the self delusion that he is "That Prophet" while Ron fancies he and his wife to be the Two Witnesses of Revelation.  Neither man is actually either and both are delusional tale weavers.

Even the Apostle Paul has a major meltdown over not being recognized as he felt he should be in his own time. The entire chapter 11 of 2 Corinthians is his proof of Apostleship and delivered in a somewhat sarcastic tone to those who seemingly had some doubts.

"
16I repeat: Let no one take me for a fool. But if you do, then receive me as a fool, so that I too may boast a little...Speaking as a fool, however, I can match what anyone else dares to boast about.
22Are they Hebrews? So am I. Are they Israelites? So am I. Are they descendants of Abraham? So am I.
23Are they servants of Christ? I am speaking like I am out of my mind, but I am so much more: in harder labor, in more imprisonments, in worse beatings, in frequent danger of death.
24Five times I received from the Jews the forty lashes minus one.
25Three times I was beaten with rods, once I was stoned, three times I was shipwrecked. I spent a night and a day in the open sea.
26In my frequent journeys, I have been in danger from rivers and from bandits, in danger from my countrymen and from the Gentiles, in danger in the city and in the country, in danger on the sea and among false brothers,
27in labor and toil and often without sleep, in hunger and thirst and often without food, in cold and exposure.
28Apart from these external trials, I face daily the pressure of my concern for all the churches

Paul knew he had not been ordained an Apostle by any, such as Peter, James or John, the closer associates of Jesus himself.

Galatians 1:11 I want you to know, brothers and sisters, that the gospel I preached is not of human origin.
12 I did not receive it from any man, nor was I taught it; rather, I received it by revelation from Jesus Christ.

Paul went so far as to note in Gal 2:6 As for those who were held in high esteem (Peter, James and John as the Jerusalem Apostles)—whatever they were makes no difference to me; God does not show favoritism—they added nothing to my message."

For a more in depth study into who did or did not ordain Paul see:

The taking of titles to oneself and the desperate seeking of approval, affirmation and religious authentication is a common need for those who strike out on their own in the need to lead others in all things Biblical.  It is a required practice and ploy if you are going to take a piece of the mantle left by Herbert Armstrong and the Worldwide Church of God.  Joe Tkach did it as well to raise the lowly "Widow's Elder" to Apostle eventually over nothing much.

In some churches, authorization is by ostentation. "Look at this place!" can be quite enough to convince those so driven. Dave Pack and Gerald Flurry have incorporated a bit of this schtick into their own authorizations by the Deity as his representatives on Earth. Let's face it, when you have one of the few Steuben Cups of Elijah, you gotta be someone special! 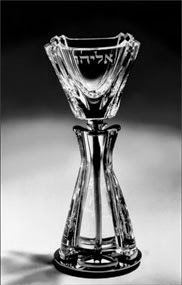 In others it is also title taking such as Father, Monsignor, Holy Father, Your Eminence, Pastor, Reverend, Bishop or Cardinal, that elevates.  All are designed to set one apart as validated and authorized. When one is either offended by the titles of the "worldy religious", men and women who at least have done the hard work of study and credentialing to be so, they evidently have to appeal to such nonsensical means as dreams, words that can have double meanings and simply declaring themselves so to be. This is the Church of God way to divine authorization.

It, however, doesn't actually make it so and let the buyer beware.
Posted by DennisCDiehl at 6:37:00 AM

This is a complex topic. I think it consists not of one category but of several. We may ask why the Christian Church considered Paul an Apostle but Gregory of Nyssa a Church Father. This is different question involving larger concerns than the question of someone's title in a small denomination.

At this time, church titles are really only of denominational scope. Baptists, for instance, do not care about the ordinations in the Methodist Church except to show courtesy when appropriate. And I am sure nobody in the Christian Movement would have a problem with HWA assuming the denominational title of Pastor General. But HWA was persuaded by his over-zealous minions to recognize himself as an Apostle with the authority of the Biblical Apostles. Alas, this inapt decision only ever really amounted to a denominational title. The Christian Movement never recognized HWA as an Apostle, of course. But HWA's minions must have been deliriously happy because of the down ballot effect.

Among the various title hungry Millerite leaders, I think David Koresh pre-empted all of his fellows by simply stating that he was Jesus Christ.

In sports, some people can "talk a good game". They are armchair quarterbacks and can be experts about what is going on in the game on the field. 99.9% of the time, these same folks couldn't throw a ball , or hit a slow pitch softball, or shoot a layup if their lives depended on it.

This goes on is sales organizations and the like in the business world too. Most sales people suck, and most of a companies sales come from just a handful of producers. But the loser sales reps always have the "answers" or "secret techniques".

Guys like Thiel, Malm, and the rest of the COG hierarchy are in the same boat. Big brags, great claims, big advice for "everyone else", and yet have little real or tangible personal success or demonstrable, effective impact for the improvement of lives for either themselves or that of their followers in a real spiritual sense.

It has become as ridiculous as a bad magician is, with cornball tricks that are easily discerned, trite, and from decades ago. Sorry Bobby, but your cheap school boy "card tricks" , ie, supernatural claims, are ludicrously laughable to any discerning audience.

Taking advantage of poor, barely educated , down and out Africans, is as despicable as deceiving and misusing children, or elderly abuse.

Years ago, there was a film or TV presentation called "Peter and Paul" which I found fascinating. Peter has been regarded by Christians as having been the individual whom Jesus appointed to lead the church, yet in so many ways, Paul eclipsed him. Peter's developing profile and notoriety made it so that he basically had to hide and go into exile to avoid constantly being arrested, or possibly even martyrred. It appears that in Jerusalem, James became the face of the new movement fairly early on. And then came the huge work amongst the gentiles done by Paul, when it was actually Peter who had received the vision regarding all of the unclean things, his calling to minister to gentile peoples as well as to the Jews. The film depicted Peter's angst in the face of Paul doing an allegedly greater work, and Peter wondering about, but never giving up on his own commission.

When Peter and Paul were experiencing bouts of existential angst, it was oddly timed with the birth and growth of a major, game changing movement. There were measurable results to their ministries, yet each apparently expected even greater things, and were their own harshest critics. Legend has it that Peter did not consider himself worthy to die in the same manner as Jesus, and requested that he be crucified upside down.

The measurable results of the contemporary Armstrong movement do not provide evidence supporting anyone's ministry. I've observed many times that if there were one breakout standout group that appeared by its results to have the witness of God behind it, the blessings and numbers would naturally draw even greater numbers of people to its leader or leaders. However, we simply don't see that. All we see is hype from people who have exhausted themselves, doing everything they possibly can to achieve reignition. They are preoccupied with themselves, and their own statistically negligible works. For every ACOG, even the larger ones, there are single megachurches in each major city with greater numbers of dedicated and enthusiastic members than an ACOG has globally. So, it is laughable every time splinter leaders point to their great works, and complain of not receiving the recognition and followers which they imagine that they deserve. This is just my opinion, but I don't believe any of them are cut out for this line of work.

I remember the commercials for that.


Here is the sort of person you need to be to stay with Satan's false prophets and their satanic imposter cults:

Gerald Flurry's PCG cult: You need to hate families, especially your own, and all normal family relationships. You need to love sexual immorality.

Ronald Weinland's COG-PKG cult: You need to love fiction and lies and nonsense.

Robert Thiel's CCG cult: You need to be a retard. Or someone who preys on retarded leaders.