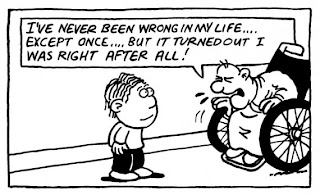 Doesn't this answer the question, "Who is the Beast?".

Here's hoping that the Beast, False Prophet and the two witnesses will all be Armstrongists, for it would be so very symmetric (not well understood in the United States because they don't use the symmetric system of measurements!).

Roderick Meredith has not committed any major sins since baptism because pride is not a major sin, it is just one of the deadly ones.

Please Doug, do tell me about these competing scales of of sin order ranking and exactly how these hierarchies work.

On second thought, maybe it's better if you don't tell me.

Anonymous, I can't tell you because I frankly don't know.

I have no idea about "major" sins.

You'll have to ask Roderick Meredith, I guess.

But I just can't understand why you'd want to be like church leaders.

Well, I am guessing you are new to the church, Doug, otherwise you would not be asking Anonymous such a, frankly, um, EMBARRASING question. No offense!

Why, just look at how fat, happy, and successful all the church leaders are. Isn't the secret to their success the fact that they KNOW what sins God "winks" at, and thus have the advantage over everyone else, who obviously DO NOT KNOW these things? How else do you explain how they rose to the TOP!?

I too want to be fat, happy, and successful in this life, and then have access to the VIP lounge while I wait for preferential access into the kingdom, where a cushy job in God's Government awaits me. I want to be just like all the rest of the church leaders! Doesn't that sound good to you? Just nod and smile.

After all, isn't this what church is SUPPOSED to be all about? We're in training now, Doug, and if you're not training to be somebody IMPORTANT in God's Government on Earth today, then you won't be somebody IMPORTANT for all ETERNITY in God's Government in the Wonderful World Tomorrow either. I know you want this, Doug. Oh yes, you know you want it too.

But by the way you talk, I don't know, maybe you don't quite understand all of this or something. Maybe you're just not CONVERTED yet! Well, just stop and consider for a moment. Can ALL those church leaders be wrong? That more than just highly unlikely, it's completely absurd! If anyone was in a position to know these things, wouldn't it be the ministers in God's True Church? Why, of course it would!

See how inescapable all of my logic is? That's how I know it is all 100% the truth from God. I am confident that eventually your mind will also be opened up to receive this wonderful TRUTH through God's grace. You don't have to thank me, though. I'm always happy to help a little brother out! You betcha!

If I seem a little condescending, all I can say is, well, once you have it all figured out, it's a little hard not to be! Besides, that's one of the "minor" sins.

With deep love, in Jesus' name,

Warning: The Pastor General has determined that this completely satirical comment may be harmful to your health.

Yes, Andrew, that's me (technically, the correct Language construct is "that's I", but it doesn't sound right): I ask embarassing questions. The Apostle James commented that God resists the proud. I'm thinking that I don't really want to be in the proud crowd.

So here's the modern version of the Emperor's New Clothes.

Once upon a time, a vain Emperor was conned to go naked amongst the throngs of his people under the caveat that he was really wearing new clothes and only fools couldn't see them.

A young lad shouted, "The Emperor is naked!". The people turned and looked at him. His parents turned red from embarassment and shushed him up. They quickly took him home and hoped the entire incident would be forgotten. That was not to be.

There was a knock on the door that night. The Emperor's personal guards were standing there. They demanded the boy come with them.

They put him deep in a mental institution and filled him with psychotropic drugs to "cure" his "psychosis". He never saw his parents or anyone else he knew. He lived his whole life there in solitary confinement and became thoroughly institutionalized.

He died a broken old man at the age of 92, never having seen either the Emperor or the sun ever again.

If the ministers could arrange it, they would do the same thing to anyone bold enough to comment on the ministry's blindness and nakedness.