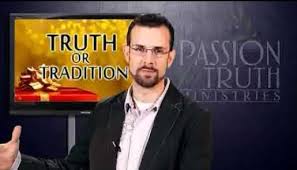 In May I posted an article and video about Jim Staley, a Sabbatarian minister that many COG members follow, had been found guilty of fraud.

The latest is that he has been sent to prison:

Pastor at 'Passion for Truth' church  sentenced to prison for swindling the elderly.

Jim Staley, 40, was sentenced Wednesday to 7 years in prison and ordered to repay elderly investors $3.3 million. He pleaded guilty to four counts of wire fraud and profited $570,000 in the scam of elderly people who trusted him because of his Christian faith and family values. Some of them were suffering from dementia.

The article quotes one member who said this:

“The dishonesty was a big problem for me,” Josh Ernst told the paper. “I started to see a pattern — he used the same sorts of excuses, blamed other people, and nothing was ever his fault or his responsibility. That happened one too many times.”

Armstrongism has always been filled with this same kind of corruption.  In Pasadena gold and silver investment scams went on all the time.  Church members believed the other members and ministers and gave them hundreds and hundreds of thousands of dollars in money.  Even single one of them lost their life savings.  The prevailing thought was, if it was a church member saying this then why would they lie?   Why would our minister lie to us?

It wasn't only men who led these con games.  There was one woman in Pasadena that took hundreds of thousands of dollars from members.  She got away with the con game.  Her own children refused to do anything about her when confronted.  They were beneficiaries of her money so why would they. Widows suffered greatly because of this women and led one to an early grave.

You can read more about Staley and his Sabbatarian movement here and here.


“The prevailing thought was, if it was a church member why would they lie?”


That is how I tended to think in my younger years. If I heard that someone was in the WCG, or even just that they read the Plain Truth magazine, I carelessly assumed that they were righteous, wise, honest, reliable, trustworthy, safe, etc.--all the good stuff. Of course, I naively thought that they actually followed the official teachings of the church and the Bible, especially the stuff about morality. It also seemed reasonable to think that surely the more years they had spent in the church, the wiser and better they would be. The WCG had taught that one would meet true Christians with the Holy Spirit.

Then, something tragic happened. I had the great misfortune of actually meeting people in the WCG and its splinter groups like the PCG, GCG, and UCG. I got to see firsthand what many of these people were really like and how they actually thought, talked, and behaved. I also heard about numerous other splinters, painful slivers, and thorns in the flesh. Rather than old age being a sign that the people were wiser and better than ever, it turned out to be a good sign that they were more filthy and perverted than ever after a lifetime of secret sins and hypocrisy. What a vile bunch!

The reason that one tends to meet certain rotten people in the cults and have problems with them is that they are the predators with the bad agendas. They are always on the lookout for new, unsuspecting prey, and are forceful in pushing themselves on others. Now, instead of carelessly assuming that cult members are good, I often tend to be suspicious of them. In fact, it is not uncommon for me to wonder early on what Satan and his evil spirits have sent them to do this time, and often see through them rather quickly.

I watched a video of his. He's an arrogant jerk.

"In fact, it is not uncommon for me to wonder early on what Satan and his evil spirits have sent them to do this time, and often see through them rather quickly."

Ahem....We had NOTHING to do with this. These guys think this stuff up all by themselves. We have virtually nothing to do with anything that the COGs can come up with. They should give US lessons!

"Warm" Regards
Satan and the not as evil as you make us to be Spirits.

The "converted" qualities Anonymous 7:32 refers to were in evidence at the AC Press back in the 1970s. One time, as we were working to get the PT prepared for the Postal Service, a young lady on our team suddenly asked, "Bob, did you fart???" I hadn't, but the evidence lingering in the air was conclusive! Somebody most certainly had! This was not unusual for Ambassador College. We had had to deal with this problem on a continuing basis in the AC mens' dorms.

I said to the lady, who was somewhat new to our team, "Here, watch this! This is one of the reasons why I like working here. The people are all in the church, and they can't deliberately lie, because they know they will go to the lake of fire!" I went to the various members of the team, and repeated her question to each of them. Suddenly, one member of the team turned red and answered in the affirmative. I told him I would be more than happy to man his station temporarily if he needed to do the considerate thing and excuse himself to go to the restroom between breaks. We all got a good laugh over it.

Unfortunately, people continued to be inconsiderate. We ended up bringing Lysol in as part of the equipment in the tool kit. Fortunately, we usually got advance notice when HWA was going to bring a tour of overseas dignitaries through the press. There is no way that "Sorry. It just slipped out." would have been an adequate excuse on one of those occasions.

Why should any of this be a surprise? It's the Cult of Herbert Armstrong Mafia after all.

The CoHAM has always attracted the evil, vile, the psychopath, the sociopath. Why wouldn't it? It is the hotbed of all sorts of scams; an opportunity that is irresistible.

This should all so very clear after reading "Snakes in Suits" by Dr. Robert Hare and Dr. Babiak, "Moral Mazes" by Robert Jackall (read the twentieth anniversary edition) and "The Corporation" by Joel Bakan.

1. Each of the sects of the CoHAM are corporations with the "middle management" (read regional pastor and above) living the lies of situational ethics, abstract morality, patronage bureaucracy, networked authority, self-promotion and abject compromise;

2. Each of the sects of the CoHAM is a cult replete with distorted perceptions and outrageous beliefs, not to mention the bootlicking devotion to "authority" where people are comfortable with letting others do their thinking for them;

3. Each of the sects of the CoHAM is high maintenance demanding an excess of resources from the 'membership' through great sacrifice;

4. Each of the sects of the CoHAM require absolute loyalty, no matter how immoral, illegal or unethical the leadership may be;

5. Absolute secrecy is required to cover up misdeeds;

6. There is constant internal chaos as various parties of the upper echelons of the bureaucracy vie for ascendancy -- it is this instability that provides vast opportunities to the narcissist, sociopath and psychopath to scam and manipulate those in the CoHAM;

7. It is a dysfunctional environment of insanity where fantasy is sold as reality: Anyone remaining in the venue will not be able to be rational for very long;

8. The CoHAM screws with your priorities so that you do all the wrong things for the wrong reasons while causing you to believe that you are 'holy', 'righteous' and 'doing a great work';

9. The CoHAM fosters divisions, pitting members against members, often manifesting itself in spying (such as the recent revelations about "The Amazon.com Way" of management.

The structure is highly efficient to induce people to compromise their morals and ethics while making them believe that they are just fine.

It's disgusting and repulsive.

Just ask yourself (seriously, in those rare moments of honest insight): "Do I really want to associate with members of a cult"?

And the answer to that is extremely telling by revealing what sort of person you are and how much crap you will tolerate to prevent the discomfort of perceived loss in terms of dysfunctional relationships.

This is much like I've seen happen over and over again in the UCG.

Some of those that pulled these cons in Pasadena are sitting in UCG now. The others are in Living Church of God.

Guess who decided to speak out sympathetically on behalf of this convicted swindler after he was convicted? Joseph Farah, head of WorldNetDaily.

Found this from an article about this from the Rawstory article linked in the post:

"Staley has only paid a tiny fraction of restitution owed to victims — $1,950, despite the fact he lives rent free with an annual church salary of $127,000."

The only good aspect of Armstrongism is that they did provide tickets to opt out. If you got a potentially terminal disease, you could escape the bastards by just letting it go, and if you didn't candle to a miserable eternity, there was always the good ol' Lake of Fire.

Nothing you have to be forced into could possibly be worthwhile.

Eh, truth, money. Those are the same thing, right?

It's the same thing about being in a "mainstream church" and opting out. No need for a terminal disease! After watching, for instance, Creflo Dollar preach for more than 15 seconds, it becomes clear to most people that he's a total scumbag and time to heave him overboard.
Same is true with so many other bastards and the "mainstream churches" they lead. The worst I've seen are those who lead the Christian megachurches.

SO I guess the Backbiters are all sinless. Those without sin cast the first stone. So Much for walking in love and forgiveness. I'm certain the sinless people here aren't so sinless after all. I bet you there are skeletons in their closet as well that has not yet been revealed that you are concealing, and God forbid anyone find out! Yeah, Keep Throwing Stones. God Is Proud of you.

My goodness, "we all have sinned and fall short of the Glory of God!" Jim Staley teaches The Truth , no I don't go to his church but I watched him on line! I think is a righteous man now maybe not then. You brothers who claim to not have sin, did you know that is you sinned against one Commandment, you have broken them all! Not only that, if your sin is a sexual one, they is worse.

I say as the person above me, if you have not sinned, throw the first stone or shut up!! If you are not a Believer, you have no business judging Jim and even if you are, you know better!

I am very sad to see all these disgusting this about Jim and all the others!