Dennis On: "How Long Will The Hindsight Church of God Put Up With Pastor Ron??" 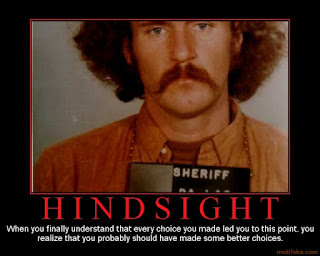 How Long Will The Hindsight  Church of God Put Up With Pastor Ron?

I have to say , while not surprised, I am amazed at how either gullible, blind or just plain foolish the followers of Ron Weinland seem to be.  How can you sit there after being told how literally true Revelation 11 is concerning himself and then ultimately his wife as the Two Witnesses, and then not see he knows how stupid this is and is looking for an out?

Weinland now says that the Two Witnesses won't die literally in Jerusalem after a 3 1/2 year witness against the world  and then caught up to heaven.  Now, it is the last 3 1/2 years (2008-2012) of his ministry and he and his wife won't die but will live right up to the Second Coming.

He is endeavoring to produce mass amnesia in his readers and followers.

Ron doesn't know who those resurrected after Jesus death and roamed around Jerusalem were, but he will in a month.  What?  Really Ron, if you want to know about that particular part of the Gospels, just give me a call.  But in short, it never happened and the other Gospel writers had no clue why that came up either.  One did add, "after Jesus resurrection," when he realized that Jesus had to rise first and before them... so after the graves opened, they just layed there waiting to get up...ewwww.  But I spare you.

Somehow this is all a great deception of Satan when in fact it is all a great deception or rather realization that his views are simply wrong .  Rather than admit this, Ron is endeavoring, as failed ministries often do, to rewrite the story originally told.  Once you start hearing, "We  (read "I") could not imagine what God was really doing!"  "This truth is more amazing than we (read "I") ever imagined.  or "We (read "I") just did not understand how awesome and incredible God's plan is," you really know you are being conned when what was spoken as so literally true now becomes "Spiritual" and Ron can't imagine how you could have misunderstood this from the beginning.

If you simply listen to Ron's explanation of all this with a critical ear you will see that little if any of Ron's way of explaining this all makes any sense.  His sermons are merely diatribes and opinion with much generalizing.  He seems incapable of giving a coherent explanation of anything. Wandering all over the place as things come int his mind, you do not get the impression the sermon was actually thought out or prepared for.  While he may tell you how amazed you should be or how awesome it all is, merely cobbling Old Testament stories and examples together mean little and prove nothing about our time today.

If you could read a transcript of his sermons, it would wander all over the Bible and ultimately mean little by way of explanation and certainly be very short on any proof that he is on the right track and speaks for the Deity.

When all else fails, just remind everyone that ultimately, the timing is in God's hands.  How nice it would have been had he just said that to begin with, not write and speak like the timing was in his hands and then have to back up to save his career.  Now Ron is blaming the people for "resisting God's truth and are filled with horrible, horrible pride..."   Ron has an amazing ability look back in hindsight and discern accurately what God was obviously doing.  Looking ahead?.....not so good at that.

The COG ministers who base their messages, warning and reasons for being on Revelation should really go take a history course on the book.  Revelation spoke of the physical Jerusalem, then surrounded by Romans who finally won out, but now, says Ron,  it is to be viewed as the spiritual Jerusalem.  In fact, real Jerusalem is called spiritual Sodom and Gomorrah, but the city is literal.  Revelation has nothing to do with today.  It became a failed prophecy in the Fall of 70AD.

Ron hates the word "crucified."  Sick sick...  He prefers stake.  Crucified reminds him of the cross and of course, we'd not want that to happen...  I suppose on this, Ron and Bob "We don't believe in crosses" Thiel agree.

To be honest, sermons by Ron Weinland are like a pilot saying he's going to fly to Washington and then spends the next two hours flying all over the Midwest and lands in Cuba...  I would bet no one person in that audience could explain to another just exactly what Ron was talking about and how he proved it.

Well, I keep waiting for Ron to explain just how Revelation is no longer to be taken literally and  speaking of him and  his witness wife, but I just don't think he's going to get to it.  Maybe those in the audience will be fooled into thinking he did.  I don't know.  I don't have anything personally against Ron Weinland anymore than I do Dave Pack.  What I do take exception with is the ignorance with which they lead their followers.  These men are not well read or educated outside of the very small world of theology they live in.  They are mere Bible readers, talkers and at times, voice raisers.  None of these qualities qualifies them to be correct in their views or make others believe they are.  Like many ministers around here who are ministers because "I stopped drinking,"  these men are ministers because they want the world to be as they see it and they will never sit under the teaching of anyone but themselves. The pay  and perks can be pretty darn good too.

To conclude because I don't think I can listen to the rest of today's sermon without falling asleep, Ron has once again turned what he announced as literally true in the past into a spiritual truth which gets him off the hook for failed literalisms that must shortly come to past.  If the Jerusalem of Revelation 11 is spiritual then so are the plagues, vials, trumpets , trombones and flutes of the previous chapters and we can relax.

If God's spirit is dwelling in the Holy City now called the Church, that is one whacky and confused spirit.   How could anyone not consider the fruit of it as a confused and unsure trumpet?

Ron was greatly damaged by the collapse of WCG .  He is very angry and hurt by it all still.  That never goes away I think.  He did not invent that emotion or result.  It was very difficult. It was being done to us as ministers and not done by us for the most part.  I regretted ever hearing about the Armstrongs, Tkaches or WCG. The cost of my mistake as a younger man was going to be high and was.  I got a counselor and a Dr. put me on medication to handle the depression and loss.  The loss of friends was terrible and hurtful.  I guess they were friends because of church mostly.  In my wildest dreams, I never would have imagined I would have had such an experiences as provided by the Armstrongs and Tkaches.

But Ron's current attempt to make Revelation mean what it never meant is sad and dangerous to the real spiritual health of those who believe they don't have enough personal permission to think their own thoughts. Ron is back peddling to save his ministry.  While he is still hooked on "four more weeks" (from this writing), what that really means seems vague.  Truly, Ron is one of the most confusing COG ministers out there.  He still can't really seem to keep the literal separated from the spiritual.  I think he is simply confused and the hope that lies within him is falling apart.  It will be interesting to see what five weeks from now do to Ron.  He is under a great deal of stress by his own admission.  Personally I hope the man gets some help before he loses it and leaves the disillusioned to fend for themselves.

In reality, "Revelation was the swan song of militant Jewish Christianity (before 70 AD).  When Jerusalem was destroyed, when Rome waxed greater and  more powerful, when the False Prophet (The Apostle Paul rejected by the Jewish Christian Church at Ephesus. The Beast was Vespasian), gained more and more followers, when the book itself was proved false within two years, (not the speculated 3 1/2) when it became evident that the Jewish Messiah/Christ would not come, the Hebrew Christians lost their virility and their cult faded under the combined assault of orthodox Judaism and of Gentile Christianity..."
The Religion of the Occident, Larson, P. 47

Ron terribly failed to explain how this transition from what he once felt would literally happen and a major part  which he would play in it all.  Now, evidently, it has become merely spiritually true.  It just seems like he has to back peddle, and fast before he has no ministry or credibility.

If Jesus does return in three weeks, I promise to apologize and admit that , while I did not understand God's witness, and if it's not a hologram, Ron was right.  I will also ask that next time the Deity provide a better speaker and more theologically educated Witness...

It's like a man saying he's going to fly to Washington, but he's not a pilot, doesn't know how to fly a plane and tells people when it doesn't happen that he's flown all over the Midwest and had to land in Cuba because the gas gave out.

And don't assume that he doesn't know he's a con.

Never ascribe innocent naivete when psycopathy is a better explanation.

"Stupid is as stupid does"

Aren't you missing a mansion somewhere in Beverly Hills? You fail to see the point of the article.