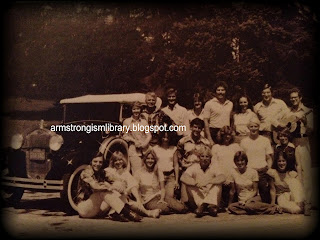 
Nothing makes one warm and fuzzy like listening to old recordings of Garner Ted sinning singing.  I remember hearing him sing when I was little at one of the Feast sites we went to.  Then after coming to Pasadena I got to see him sing all the time.  His last recording was made with the Young Ambassadors with him posing with his Model T on the mall in front of the Auditorium.  Soon after this Big Daddy kicked him out of the church at the instigation of Rod Meredith.

Ted certainly left a path of destruction with abusive teachings (child rearing) and false doctrines, but say what you will about GTA, he certainly lived life to the fullest.  He was a hunter, a gambler, smoked, drank, swore like the sailor he was, liked old cars, was a  licensed pilot, vain as could be and liked his women.  Compare that to the prissy, tight assed little men like Rod Meredith and Gerald Waterhouse.  Rod who claims to have never committed a major sin since baptism and closet case Gerald spouting thousands of lies and false prophecies.  It does not take much to see who was really the more authentic person of the three. 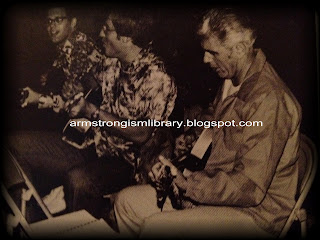 Inspite of all the crap GTA did, I would rather sit down at his table and have a meal than at Rod Meredith's. Sanctimonious self-righteous hypocrites no longer appeal to me.

Ted was terrible when he went into preacher mode, really went over the top and became insulting to others and more than a tad arrogant. Most sermons/broadcasts of his that I can recall were rambling discourses that seemingly went nowhere.

Otherwise, he is a somewhat tragic figure. He clearly should have gone with his first instinct and avoided his dad's church altogether. But he was an emotional and apparently needy guy (the sex being a sign), and eventually that required validation from his dad, among other things, so he went into the family business.

Apart from all the trappings he could be a pretty regular guy. But trappings are called that for a reason, and he became who he became, and sometimes he was a real jerk. It was his choice, so he's responsible, but still, there were times you had to wonder.

I have to admit that I still have some admiration for Ted and some good memories of him, in spite of his obvious faults, less than loving actions and shortcomings.

I don't know what made him the hypocrite he became, but I suspect that his childhood under dad was no picnic and had much to do with how he turned out.

Once you get over the nonsense that we're all here to qualify for some eternal reward or for damnation and accept humans as they are, with all the good and the bad, it gets easier to cut the obviously flawed a little slack. Sure, he was hypocritical and did some things that are hard to justify, but none of us are squeaky clean when we look back over our lives honestly.

To err is human is a truism no one can escape. I'm not trying to whitewash Ted. All I'm saying is that he was human and did some amazingly stupid things due to compulsions we can probably only imagine.

Don't we all at some points in our lives?

There are a few things I hope go to the grave with me and are forgotten forever. This is a factor that makes me kind of glad that I now believe this life is it and hoping for an afterlife is most likely a delusion. Whatever the reality is, it just is, and nothing we "believe" is going to change it.

"For what is a man, what has he got? If not himself, then he has not...To speak the things he truly feels..."

Isn't that better than just sitting in a mindless audience listening to mindless speculations given by others who get to say and feel everything they do...but you don't?

I liked Ted. I think Allen is correct to see he was stuck endeavoring to be authentic in an inauthentic environment.

Ted was no more an embarassment that countless others in thousands of churches, including pastors.

I never felt it was real or fair to put a man in such a position where he has to be do what every last person in the congregation has no intention of being or doing. The expectation of the minister is that he be the sacrificial goat that is all that others never will want to be.

When a member made a mistake, they brought out all the scriptures on foregiveness and moving on. When a minister makes a mistake they destroy him.

We expect an artist to be somewhat of a rake. We expect the artist to be out of bounds and a free thinker. But we expect a minister to be none of that.

I would love to know the secrets behind the life of any real Apostle Paul.

Paul liked to tell you he was special and saw things in the third heaven he could not share.

When he had a thorn in the flesh, he did everything but actually say what it was.

Paul make the generic point that there were things he should do and didn't and things he should not do and did. But true to form, he did not mention exactly what they might be. It would have helped his credibility if he had. He called himself both an Apostle not one wit behind the Jerusalem crew and also called himself the lowest of the low and the least of the least. Hyperbole to elicit sympathy I think. What made him the lowest and the least? He never said.

So, Ted was Ted. He did try to move the church from the Bronze Age to the present but got slapped down by the zealots.

Long story, but i liked the guy. And while seeing how stuck he got, in his later years, in the 60's and for as smart as he was, never stepped up to the plate on Bible errancy, evolution and such, probably was doing the best he could for what he did and what he was stuck in.

He was more the artist than minister.

Right, Dennis. I've often said he should have been in Hollywood and a member of the "rat pack." He and Dean Martin would have made a great team.

Let’s be honest - when Garner Ted Armstrong was at his peak, we were all proud to have him as our public church spokesman on radio and television. He took to television like a duck to water. On radio, he was the friend of countless lonely cross country truckers as the WCG’s World Tomorrow radio broadcast blanketed America on the country’s strongest 50,000 watt clear channel radio stations. He was responsible for bringing in many new members into WCG.

Garner Ted was gifted and an extraordinary speaker. I disagree with the earlier post – every time I ever heard him speak in person he was to the point with a message destination in mind. I agree with Dennis Diehl and Allen C. Dexter’s observations.

Can you imagine having HWA as your boss, and treating a 40 year old son like he was still a little boy? And Ted wasn’t stupid - I am sure he was very aware of his father’s tendencies to embellish.

Garner Ted Armstrong’s fate was sealed as heir apparent to the WCG when his older brother Richard Armstrong was killed in an automobile accident in the late 1950s. Had the power struggle and personal sins of the 1970s not happened and GTA had inherited the Church, there would still be a WCG (with reforms) and an Ambassador College today, IMHO.

As Herbert Armstrong proved, success without a successor is failure. When father ousted son, there was no real successor for WCG.

"As Herbert Armstrong proved, success without a successor is failure. When father ousted son, there was no real successor for WCG."

No statement could be more true. Morally bankrupta as he was, GTA left Tkach in the dust in every respect. Tkach was WCG's doom. Too bad it didn't just dry up and blow away into dust instead of all those noxious weeds that sprang up and make the original WCG look a bit magnificent and profound by comparison.

Ted was glib, but he was too accustomed to adoring audiences. People were dazzled by his style. He was held up as a master of extemporaneous speaking. "Silver-haired, silver-tongued orator." Remember that line? Please. He had all the inflections down pat, sure. But he rambled off topic and nobody had the cojones to tell him. Go watch an old broadcast of his on YouTube; within 5 minutes you'll find yourself wondering where he was going.

An uninitiated person would be sitting there saying "huh?" no later than 2:30 in, when Ted starts wandering off to Nebuchadnezzar and the sootsayers and seers.

Par for the course. Long and winding road to nowhere.