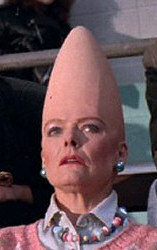 Men, is your wife asking too many questions at church causing long discussions to happen?  Dose she run off at the mouth at church talking to other men asking questions that she should be asking you first? Is you wife going over your head in other matters without seeking your holy manly wisdom first?

Apostle Malm has laid our the law on what you men need to be doing with your brawling women in church:


A wife’s function is to be a HELP MATE for her husband. She is to ask her husband; to cut down on the discussion in church service and help maintain order; to keep her husband “in the loop” so that he knows what is going on and also learns the question and answer; and out of respect for him.  He is the one she should be loving and putting first in her life and thoughts; to whom she should be looking.  It is not right for her to go over his head without his consent to ask another.
This is called “Chain of Command” and it is the major cardinal sin in any organization to go over the head of one’s boss.  That is a major sign of DISRESPECT.

Wives are not to provoke their husbands and are to faithfully fulfill their role regardless of what the husband does.  They are to set a godly example even if the husband does not.

Is the Apostle soon going to be demanding that women in his splinter group cover their heads in church like the COG splinter group House of Yahweh cult does?

Paul tells us that a woman’s hair is given to her as a crown of glory and they she is not to pray or prophesy without covering her glorious crown of hair with a veil as an act of humility; so as not to outshine her husband, her head.  before I go into this further I would like to make the point that Paul here clearly says that a woman may prophesy.
Were not Deborah judge in Israel? And Miriam a prophetess?  Was not Anna a prophetess, Luk 2:36 ?  There is plenty of room in the faith for our women to shine!  Let them do so decently and in order; remembering that their first priority is their husbands and children until they be widowed and their children be grown.  Then let them become guides and wisdom for the younger women; and through the younger married women [who will influence their own husbands] they will influence the whole Ekklesia.

Now women are to cover their crown of glorious hair whenever praying or prophesying [in public or private] out of respect for the authority over them.  And if they refuse to do so, they should have their heads shaved and their glorious hair cut off [shorn].  Why? So that they do not wax proud and become vain, as so very many have become today.  So that they do not outshine their husbands in their glory.  So that they come before God in the beauty of true humility; and not in the emptyness of proud, vain,  transitory physical beauty [vainglory]

You  men are not off the hook either.  Do you bully your wife?  You had better be careful;. She might just be ruling over you in the world tomorrow on some distant planet!  God knows how embarrassing THAT would be!


You husbands who are domineering, how do you know: Whether in God’s Kingdom your wife will be greater than you?

Women, know your place in the Church of God! Otherwise you could have a nightmare like Loma did and cause your husband to start a new Church of God!  As if we need any more of them right now....


(UPDATE)  The Apostle Malm DOES think that you women need to cover your head in church!

In the area of women wearing a covering while in prayer, does this mean we (the ladies) should have a covering on our heads during opening or closing prayer, or during any other prayer we have a part in by saying Amen? We have never been taught this in WWCG or LCG, I don’t know if other COG’s teach it. Thanks very much.
This was NOT taught by HWA as Loma would have none of it. And a simple scarf or small hat [not overly ostentatious remember the purpose is to show modesty and respect for Godly authority]. The instruction is when you are praying or prophesying, and I think that would include participating when others are doing so together with us as well. I understand what you are saying about just during the prayer, but you are also participating in prophesying when you participate in any service. When we were younger the wearing of hats was customary and some just did not remove them in the service which is quite correct. This is indeed something new as far as modern HWA based COG teachings are concerned [there may be an exception that I do not know about], although some have been following this instruction for many years. My wife who you knew began doing this in the 70s. James

By all means, we must keep those tempting women in their place. Women are only good for keeping the house and satisfying our macho desires.

What garbage the Abrahamic faiths have saddled the world with! Malm is just another super-male chauvinist pig following male chauvinist pig Paul, whoever the hell he was. All I know about him, or the several said to be him, is that he/they was/were mentally deranged to the extreme.

And, my bible gathers even more dust. That's all the stupid book is good for.

Armstrongism always dwelled on precepts which would leverage the widest cross section of people into subservient roles. They were very heavy handed in using these things to enhance their alleged authority. When you do this, it is a given that your abuse is going to make people hate precepts which were originally good when they issued from the mouth of God.

You might teach someone to swim by throwing them into a lake and refusing to rescue them, but in doing that, you're probably not going to cause them to enjoy a lifelong love watersports. When teachers mess up the message, it produces an Isaiah 1 type of situation, in which both God and His chosen people hate the results, because the ritual behavior does not stem from love!

It'd be cool to set up a candid camera type thingy by sending a bald headed, tatooed Christian lady into one of these churches' FOT services, wearing a tank top, levis, sandals, and a cross. Oh, and carrying her Zondervan TNIV Bible!

Of course, LOL, we all know what would happen before she ever got to her seat!

Yeah...the Apostle Paul was a real authority on women and relationships. He had so many of his own to draw from...urm...well maybe not.

How is that in the NT it is single men who tell everyone how to parent, be married, love a partner, be a father a mother a sister or a brother? It's nuts

"As for my people, children are their oppressors and women rule over them."

Something is broken here -- it's not working!

Could someone tell me in what way
"Doesn't nature itself tell you it's a shame for a man to have long hair" is true? Nature tells the opposite. Male lions have the manes and the female is short haired. I have never understood how nature tells us this?

Your hair is one God-given way in which you can express your personality, or the individuality which God gave you. There is little else about your human body which you can use as such a tool, other than the physical conditioning which you do or don't do.

That's probably why some have so much to say about what you do with your hair. People's mindsets have been shaken up on a regular basis by hairstyles. The minute the mainstream becomes accustomed to one style, someone goes and changes it.

The WCG boogie woogie at the USO skinsides military haircut mindset has resisted ducktails, Beatle cuts, hippie, Joe College, surfer, punk rock, skinhead, mullet, mohawk, and just about every other non-yellow pencil innovation in style. That is indicative of those people's outlook on life. They are legalists who want every possible choice to be regimented and regulated. The NT passages regarding the great freedom a Christian enjoys all become nullified as Armstrongism filters them through the 613 OT laws of the Torah.

I don't say it is true, but one explanation (given by a hireling of the Dead False Prophet, Bill McDowell, who is dead himself) is that a man who has long hair is going to get it caught in brambles or as David's son, in a tree, while out doing work or going about your own business.

The commentaries are unhelpful except to say it is a matter of social custom, which is worse than not helpful.

I think beautiful hats on women are hot! The royals really know how to dress and man do the ladies look wonderful in hats. Please let hats come back for women and men...I do not mean bb caps.

As much as Malm gets under my Armstrong innoculated skin I like hats on ladies.

Unless she is sitting in front of me at the movies.

"As for my people, children are their oppressors and women rule over them."

Especially when they are children of WCG families that have been turned to athiesm?

"When you do this, it is a given that your abuse is going to make people hate precepts which were originally good when they issued from the mouth of God."

Give me a break. "Issued from the mouth of God," indeed. They issued from the pens of men who manufactured that God to their specifications. By the fruit of the tree, they have been amply proven not to be good.

If, as you and many others like to maintain, the creation is too great to have arisen by chance, just how do you think a vastly more intricate, etc. "god" magically appeared somehow way, way back there in the mists of eternity? An anthropomorphized, human-like god besides? He obviously is patterned after a Middle Eastern despotic chieftain who is benevolent when it suits him and a terror to anyone he gets "crosswise" with if they refuse to kiss his rear end or happen to be in the way of "his people's" territorial aspirations.

Sorry, I just can't stay silent about such nonsense, and professed sincerity of those who hold to it does not impress me.

Hats look great on women, but when it is a requirement in the Church of God for salvation it is revolting.

Armstrongites are so busy working on the miniscule, irrelevant parts of perceived necessary laws that they have lost touch with reality.

I'll break out my Easter Bonnet;)

Douglas, get a picture.

There is a blast from the past...I flew around in his Cessna 172 while he visited members in remote Ohio areas. He was a great guy, and wonderful sense of humor.

Funny part was Armstrong put the end to local pastors being private pilots. Then he got himself a corporate jet and flew around the world. I can see the safty issue because small planes are not that safe. But what about divine protection he preached about? Wouldn't God protect his local ministry in their travels...auto travel is much more hazardous.

So Bill had to dump the plane...I don't think he ever got over that, he loved to fly, and always talked about flying big jets.

Then He left the ministry and the church in the late 60's I believe.