How Does Your COG Spend Your Tithe Money? 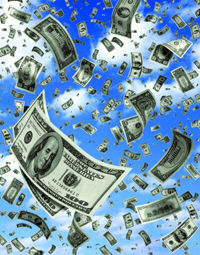 The Silenced blog has a great entry today on how the Churches of God use tithe money of the members to fund their various "ministries".  It is The Myth of Free Literature  Most assume that their tithe money goes towards "proclaiming the gospel to the world."  In reality a small percentage goes towards that kind of outreach while a huge amount goes to salaries for lifestyle upkeep.  Note that this does not only apply to UCG, but to RCG, PCG, LCG, and most of the other COG's.

7. If we assume there are about 10,000 baptized members left in UCG after the COGWA split (this is the estimate most popularly thrown about), and if they all had an average annual income of around $42,000, of which $1,281 was being sunk into media projects, this would give the a cult a yearly warchest of $12,810,000 for literature and broadcasts, of which its cheap printing and primarily web-based video productions cannot possibly cost that much. Factoring in GNM’s supposed 450,000 circulation, that would give UCG about $28.50 to spend per copy. It costs a fraction of that to print each run of the magazine. After six runs, they would have some of that left over.

8. Using these calculations, this family is paying $2,919 straight to ministerial salaries and other overhead costs per year through First Tithes and only $1,281 to print, web and broadcast projects. But the reality would be slightly different, since there are also annual offerings and whatever the COG can suck out of a family’s Second Tithe over the festival season, making the true cost much higher and more difficult to calculate.


Years ago, one of WCG's accounting men publicly stated that the Church could, "take any figure and make it say want they wanted it to say."  In other words, financial pictures and statements could be manipulated towards whatever direction the "church" wanted it to go to.

That's one of the reasons people do not believe Dave Pack when he says that the Restored Church of God has a huge money base to fund all of his earth shattering ministries.  It's no wonder he refused to release financial statements.  If he did the world would know him to be the deceiver he is.

Make sure you click on the above link for  the entire article.
Posted by NO2HWA at 11:05:00 AM

It often baffles me how every church spends the tithes when they're actually one of the groups who accept a lot of financial support from the general public. It's different for every church, but sometimes there are secrets that need revealing.

I recently had a client who was endeavoring to convince me how amazing her one man show pastor was. She said, "he even knows what some people need, rent, food etc and just gives them money from the collection plate right in church."

I told her I could give her money away all day since it was she who just put the money in the plate.

As Tony Campolo astutely observed in It's Friday, but Sunday's Comin': "I believe it is about time that the church gets its priorities straightened out…the church does not exist to be served and to be the receiver of gifts. Instead, the church exists…to serve the least of our brothers and sisters and to give our wealth to meet their needs. It should be obvious to us that the money we give to the institutional church is, for the most part, money that we give to ourselves. We buy pews and cushions so that we can sit in them. We buy stained-glass windows so that we can appreciate their colors. We purchase organs and buy choir robes so that we can enjoy music presented with dignity. And we pay for a minister so that we ourselves might be spiritually fed. Most of the money that we give to Christian causes ends up being used for our own benefit" (p. 105)