Living Church of God: Rod McNair Waits For Lightening To Strike Him 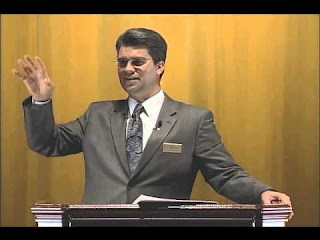 From an LCG source:

We are to use language to give grace and life, as words that are “seasoned with salt” (Colossians 4:6).  We are to “be kind to one another, tenderhearted” (Ephesians 4:32), not quarrelsome.  Thank God we are learning a different way—a way that strengthens and builds up, that imparts “grace to the hearers” (Ephesians 4:29).  As we gather to worship God this Sabbath, let us make sure we are giving the gift of gracious language! Have a peaceful Sabbath,Rod McNair

What a load coming from a man who's renowned for tearing others down to exalt himself!  The depravity of Rod McNair's character is matched only by his evil master, Rod Mereidth.

McNair came to LCG HQ's around 2007 but he has quickly risen in power because old Spanky can really respect how well McNair uses his power to abuse the members. McNair has become Chief of the Gestapo and is willing to interrogate and accuse anyone who dare question ministerial authority, doctrinal upgrades and/or other "loose bricks". He's also the keeper of the not-so-secret member files wherein he keeps spy information on tithing records, Facebook posts, private Bible study attendance, and possible involvement with deemed "trouble makers" (aka people who aren't drinking enough Kool-Aid), etc. Nothing will earn Meredith's respect faster than a spy who isn't afraid to bully members into submission, even if that means bending the truth to serve his purpose.

I only hope McNair realizes how full of doo doo he is. It would really be pathetic if McNair believed in his heart that he was "kind and tenderhearted, not quarrelsome".

Although, self awareness is often grossly lacking in LCG ministry who feel they have been chosen by God to act as intercessors. Poor confused little men.
Posted by NO2HWA at 10:08:00 PM

Another example of the wolf talking to the lambs. So whilst he is tearing people down to gain power and superiority over them, he demands that his victims respond with kindness and tenderheartedness. This gives him a moral blank cheque. Normal moral assessment, legitimate anger and criticism is stifled. Other splinters use 'unity' (putting unity above the truth) or 'division,' 'contention,' 'peace' (put 'peace' before your right to disagree and defend yourself) etc. All these twisted words are used as clubs to oppress members. They are also adding to Gods word by adding extra meanings to these words. Note that trade means action - reaction, hence people have a right to their negative feelings and to complain. Another example as to why the mafia ministers hide trade.

In an interview about his role in Arrow, John Barrowman observed that every villain is a hero in his own mind.

Poor Rod Mcnair. Ever since his character has been scrutinized on banned, he seems as if he has lost a little more weight and his hair has turned a little grayer each week when I see him at church. Whether he will admit it or not, I think the fact that his character has been exposed is really taking a toll on him. Unfortunately, it hasn't seemed to inspire him to make a positive change. What will it take?

LOL! The Board of Trade and Customs leave me envious! Proceed with caution. Spin cycle set at mild and tame. I will remember, it's like following the instructions on a bottle of shampoo.
1. Lather.
2. Rinse.
3. Repeat if necessary.

10.29. Would you care to translate your err, err whatever you said.

Come on guys. Give Roddy Mac a break. Keeping God's church pure is an EXAUSTING, thankless job but somebody's got to do it. It's because he's such a gracious and giving servant that he's compelled to divide, accuse and scheme in the name of God each day.

Nothing new here, remember "Diotrephes" of 3Jn 1:10 Wherefore, if I come, I will remember his deeds which he doeth, prating against us with malicious words: Think on this: Rev 3:20 Behold, I stand at the door, and knock: if any man hear my voice, and open the door,.... Which side of that door are you standing on? Like Christ, most here have been kicked out or left the doctrinal corruption foisted on the laity. Christ calls you His lost sheep.
The Great Tribulation is upon us and who do you think Christ will take to the wilderness? Those that practice deception or those that fight it? Those that take a stand for His word and defend it, even though they were put out of the organizations, or those who follow a man?
To cover their incompetence they always use the excuse of Matthew 24:36 which when applied as they do, calls Christ a liar.
I've done an article on it that will shock you, its at: itstimecog.com/true-servants-will-know/ and yes Mr. Moderator, it's nearly time to pack your bags.

Well 7:15, if the 7,000 year plan theory is correct, then we've got in excess of 200 years until absolute year 6,000. Also, there are other choices between bo-hica for the Germans, or bo-hica for the tyrannical ACOG ministers. If God can't protect you right where you are, He would not be very powerful, would He? Elijah was fed by ravens.

For those who may not know, bo-hica is an acronym for "bend over, here it comes again." I believe it is an expression coined in the late 1960s by outlaw bikers, describing situations where the establishment was screwing one over.

Hi Byker Bob. Some years back I came up with much the same conclusion as you did. The years didn't add up according to what we were told.
They based their scenario on the principal found in 2Peter 3:8 ... that one day is with the Lord as a thousand years, and a thousand years as one day.
Given that the Sabbath parallels the Millennium, which is 1,000 years, hence, the previous 6 days must indicate a time span of 6,000 years in which Satan dominates.
My understanding of how it plays out is that yes, there is a 6,000/7,000 year plan but notice something they failed to grasp.
Rev 20:7 And when the thousand years are expired, Satan shall be loosed out of his prison,
So, after the Great Tribulation and Armageddon comes the millennium, at the end of which, Satan is released once again.
There is no time period mentioned regarding the duration of Satan's release. Now notice what else happens at that time: Rev 20:5 But the rest of the dead lived not again until the thousand years were finished. This is the first resurrection. Isaiah 65:20 indicates another life span of 100 plus years for those resurrected. Also note that verse 5 says "This is the first resurrection", meaning there is more then one.
Luke 11:31 The queen of the south shall rise up in the judgment with the men of this generation, and condemn them: This verse implies more then one group is to be resurrected and that the resurrections take place at different times.
Does the time span of Satan's freedom at the end of the millennium correspond with the life spans given to those resurrected?
We know from Rev. 20:10 that once his efforts are completed, he is cast into the Lake of Fire and gone forever. But also at that time is what is called the White Throne judgment in which all those who were resurrected are given final judgment.

Could the 200 year discrepancy actually be fulfilled at the end of the millennium?
Yes indeed it most certainly could and will be.

Regarding your comment about God protecting you where you are, there is no question that He could but, that is not what His plan is.
He plans to take His people into the "wilderness" but while that does afford them His protection, they are there for much greater purpose then just survival.
Take care Bob.

Sorry, itstimecog, but if it were as simple as "6,000 years for man, and 1,000 years for God" then Jesus would most certainly have known precisely when He was going to return. Yet, he plainly stated that He did not. So this common practice within the ACOGs of simply guessing new math to insert into the Armstrong prophecy mold is not a legitimate way of determining when the tribulation will start, or when Jesus Christ will suddenly split the Mount of Olives. This is unguessable. The timing will be determined by Father God, when He deems world conditions as being appropriate. That is how and why Armstrongite false prophets become clueless. The world knew this as early as 1975 in our modern era, but all of the COGlodytes simply reprogrammed and began annually revising their numbers, as if somehow one of their sets of numbers would eventually prove to be true. That's not being an inspired by God prophet, it is being a self-serving Deuteronomy 18 presumptuous false prophet!

You're right BB, Christ said to watch for the events that will determine the end etc, not to count the years.
I too consider the WCG scenario redundant and useful for speculation only. However, that same old cowardly excuse used throughout Christendom of Matthew 24:36 of only the Father knows, does not say that would remain the status quo.
Let me explain.
We find in Daniel 12, the angel telling Daniel events relating to the Great Tribulation and return of Christ but he is told that information would only be revealed at the time of the end.
At the time Christ spoke those words in Matthew 24:36, the Father was the only one who knew but notice that nowhere does it say it would not be revealed.
Amos tells us that before God does anything, He lets His servants the prophets know, therefore, before the Great Tribulation starts and Christ's return, God must let us know through His prophets.
The WCG and others like to insinuate that it will all come crashing down on humanity but that has never been the case with God's wrath. He has always given a lot of warning first. They all use that excuse because God has rejected them.

This article explains it in greater detail: itstimecog.com/true-servants-will-know/

I still shake my head when I see picture like this one of Rod McNair or the other story on banned right now with the picture of Rod Meredith preaching his racist hate speech.

I recognize the gold stage curtain behind them because it is the stage curtain at the Masonic Temple from which LCG worships God on the Sabbath.

Hi Anon 5:50.
I want to point out something that is most often over looked.
Rev 3:10 Because thou hast kept the word of my patience,(that refers to those who have remained loyal to their calling) I also will keep thee from the hour of temptation, (that refers to the Great Tribulation) which shall come upon all the world, to try them that dwell upon the earth.

Verse 10 places those being referred to as Church laity who oppose the arrant teachings of the ministry during that Era (Phili) which also places Christ outside those organizations as we find in the next Era.

It's good that you're repulsed by the teachings of LCG and all other splinter groups. It puts you on the right side of the door.