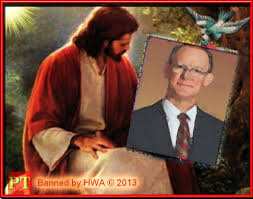 Dave is being humble.


You’ve received precious knowledge—kept secret from the world. It is not the popular traditions—fables—of modern Christendom, but Jesus’ plain words—now understood in our time. God has been waiting for thousands of years to establish His Kingdom on an Earth that desperately needs it. Yet it will not come as billions expect. Think. You’ve heard word of the Kingdom before it comes. There is great advantage in this! Christ is today preparing a specially chosen team of qualified administrators in advance of its arrival to rule under Him.

No they're not! They're just a mess of halitosis. Besides, when it's Dave speaking, you can't necessarily tell which orifice it's coming from.


Think? And get kicked out of the RCG? Sounds like a plan.


All you skeptics,
You'll be sorry when Jesus returns to Rust Belt suburban Akron
and starts working alongside Mr Pack,
generating even better pop-up web Ads
and (finally) securing funding for the mini-imitation Auditorium.

It will be a Goodyear when Jesus sneaks into Akron/Wadsworth

Hey Guys, I just found on Web MD in the schizophrenia slideshow:

What Are the Symptoms?

Hallucinations: hearing or seeing imaginary things
Delusions: wildly false beliefs
Paranoia: the fear that others are plotting against you

Some signs, such as lack of enjoyment in everyday life and withdrawal from social activities, may mimic depression.

How It Affects Thoughts

People with schizophrenia may have trouble organizing their thoughts or making logical connections. They may feel like the mind is racing from one unrelated thought to another. Sometimes they have "thought withdrawal," a feeling that thoughts are removed from their head, or "thought blocking," when someone's flow of thinking suddenly gets interrupted.

The disease has a major impact in many ways. People may talk and not make sense, or they make up words. They may be agitated or show no expression. Many have trouble keeping themselves or their homes clean.  Some repeat behaviors, such as pacing.

And just think -- this was just three of the slides!

And if you were wondering how to treat David Pack:

Medicines That Treat It

Prescription drugs can reduce symptoms such as abnormal thinking, hallucinations, and delusions. Some people have troubling side effects, including tremors and gaining lots of weight. Drugs may also interfere with other medicines or supplements. But in most cases, medication is a must to treat schizophrenia.

This is just off Web MD. We highly urge David Pack to seek out mental health professionals at his earliest convenience (maybe an hour or two from now).

Dave is 68 years old (born 1948). He knows that he has only a little time left, so is full of wrath. He has become an expert on maturing backwards.

Statistically, sooner or later, one of these "dudes" is bound to become afflicted with the 'heimers, if they aren't already. We may believe we are witnessing some really stupid things right now, but clinical dementia would really up the ante. In fact, I believe that this is something that people who claim not to be following a man, but who find themselves jumping through all manner of extra hoops these days should be carefully considering!
Make sure that the person from whom you receive your spiritual guidance is not mentally devolving.

A public service spot from BB

There is also the possibility of Lewy body dementia, the more aggressive form of dementia that killed Robbin Williams.
I suppose we'll never know for sure until he dies and they do a autopsy.

This also raises the question of whether Dave believes in God at all. Maybe to him it's all one big joke, to be financially milked for all it's worth.

And if He's relying on David Pack, He's going to have to wait many more thousands of years to come.

It took about eight years for the Tkatches to scuttle the WCG. The way Dave is going, the RCG is likely to belly-up while he's still on the bridge.

Minimalists noted: "It will be a Goodyear when Jesus sneaks into Akron/Wadsworth"

Then Dave will be Uni-Royal! However he could suffer "Fi-or Stone" :)

More nonsense.
If the words were so plain why are they only being understood now?

You make no sense whatsoever Dave.

BB, I appreciate your public service spot, and now understand that Jesus and the Apostles were afflicted with the 'heimers.

That explains a lot!

Yet it will not come as billions expect.

Billions expecting the Kingdom of God to come? But mainstream Christianity has been expecting to go to Heaven.

Got it, 9:36. Even though Jesus and the Apostles (except maybe John?) never reached Alzheimers' age, you are saying that because HWA taught exactly what they taught, and the older ACOG leaders do, too, that JC and the Boys must have had the 'heimers. I smell a big fallacy there. Armstrongism has been falsely painted as a restoration, when in fact it is a corruption. Boy, have you been taken for a ride!

Rationality is so difficult for those with mental disorders.

Armstrongism has been falsely painted as a restoration

During HWA's revival of the Makeup Doctrine, he admitted there was no scriptural proof, but he knew he knew he was right about it, because "he had the mind of God".

Remember the 1960s and 1970s womens makeup. It was thick like a mask. It looked ridiculous. He wonder Herbie 'knew' he was right on the issue. Anyone with half a brain knew that. It was like Gerald Waterhouses over sized suits. He looked like a circus clown, but everyone was too embarrassed to say anything to him.

I never Gerald Waterhouse's over sized suits. Only saw him and some of the other high ranking clowns under the big top at FOT venues while praying Waterhouse's sermons would soon end. All of his sermons seemed to take 3 to 5 years before they finally ended.

I just looked up Gerald Waterhouse on Wikipedia's "Evangelists of the Worldwide Church of God" page, and I see he died in '02.
On that page, it lists GTA as, "Dr. Garner Ted Armstrong"! What was he a doctor of? Amateur gynecology?

I loved the ratted hair and bouffant hair styles women wore in the sixties, the blue eyeliner and fake eyelashes, flaming red lipstick, and nail polish. And the co-mingling symphony of cigarette smoke and perfume! By contrast, the women in the church were made to look and dress as if they had come in off the farm during the 1940s. But, as with virtually everything else, Herbie dwelled on extremes. There was an entire spectrum in between the two extremes, one of balance and moderation which could have been followed with no harm to anyone.

Style is fun! You get to play with clothes and hairstyles as they change throughout your life. Unfortunately, we were all forced to major in the minors as members of the cult. Had we not been so enthralled with a fake apostle, and brainwashed, we might have been able to recognize what was being imposed upon us for what it was---somebody's stupid power trip, his penis extension.


Then Dave will be Uni-Royal! However he could suffer "Fi-or Stone" :)

There will a lot of work to do and a lot of people to kill
at Christ's return to Rust-Belt Akron (of all places)
First:
- return Firestone Tire & Rubber to American ownership after flattening Japan.

GTA had an Ambassador College PhD in Child Psychology. His PhD thesis became the notorious booklet, The Plain Truth About Child Rearing.

I never saw Gerald Waterhouse, but met enough people who did. One old man, who was an artist who painted landscapes, said GW told him if his paintings caused someone to lust (lusting after a landscape?) then he was guilty of making an idol. That sounded so bizarre I that the old man was joking...

I read GTAs book on child rearing. It simply advocated psychopathic mistreatment of children. Children were expected to 'obey' (ie be lorded over) otherwise extreme violence was unleashed on the child. This is psycho behaviour 101.
This conditioned children to accept mis treated by the ministers when they got older. It manufactured cannon fodder for power crazed ministers. A self serving book by a power hungry minister.

Dave says: "...God has been waiting for thousands of years to establish His Kingdom on an Earth that desperately needs it..."

Where did Dave get that information? From "prophet" Bob Thiel?

God is just working out things in accordance with His Plan. Earth does not desperately need God's Kingdom today, not will it be needed during Dave's Mickey Mouse millennium. Numerous scriptures say Jesus Christ will be at His Father's right hand until all enemies have been subdued. God has His own timing and it won't be as early as so many have thought, but time will tell...

In his later years, GTA said in an ICG sermon that the booklet should have been rewritten, and made some gesture indicating he thought the treatment of children was far too heavy handed.

In the 1970s, a book called Parent Effectiveness Training was published, and thoroughly condemned by HWA. A WCG friend said that one thing was quite obvious, and that was that HWA hadn't actually read the book.

Last night I watched, "Hairspray" live, which was set in 1962 Baltimore.

The makeup and hairstyles were great. They were a hoot, but even better was the play's message.

My wife is a John Waters fan, and during interludes of the show she provided me with details- ranging from the original movie to the Broadway musical to the second movie to what we were watching in real time last night.

The problem with the photo for this article, is that it should be Satan admiring Daves photograph. All that religious confusion and misrepresenting of God that Dave is spreading.


Anonymous on December 8, 2016 at 2:51 PM said...“The problem with the photo for this article, is that it should be Satan admiring Daves photograph. All that religious confusion and misrepresenting of God that Dave is spreading.”


Maybe that is a picture of Satan admiring his false prophet David Pack. Remember that the WCG under HWA had speculated that those idolatrous, Catholic, hippie pictures might actually be what Satan or one of his demons looks like.

Maybe that is a picture of Satan

According to art historians (yes, there is a use for them) pictures of Jesus were more Semitic until around the 15th century. With anti-Semitic actions such as "convert or leave" orders to Jews in Spain, it was decided that picture of Jesus should look more European. The modern Jesus pictures are loosely based on Cesare Borgia, the son of Pope Alexander VI.

A more accurate picture would be Dave admiring Dave...

"The modern Jesus pictures are loosely based on Cesare Borgia, the son of Pope Alexander VI."

Cesare Borgia. Cool info, thanks for sharing that.
I found this intriguing as well.
"He was the illegitimate son of Pope Alexander VI (r. 1492–1503) and his long-term mistress Vannozza dei Cattanei."