Everyone is a blasphemer, except for me 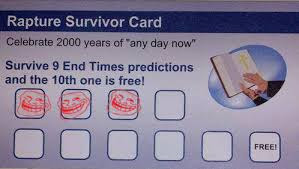 Over the last few months, we have had various idiots on the web  that have been claiming the end was here.  The latest were the ones who claim planet Nibiru was supposed to hit the earth today and kill us all.  As usual with ALL self-appointed false prophets, they were wrong.  The world is filled with these kind of people, with many of them finding a platform in WorldNetDaily, the official news source for many Churches of God.  This is also the news source for Almost-ordained and arrested Bob Thiel. 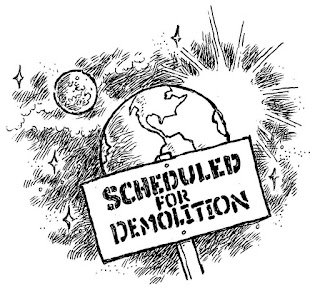 The almost-ordained one is particularly perturbed that these lying fools are making Christians look stupid. From wayward planets, Obama and Hillary, to the eclipse, it has been one crazy prophecy after another, and Almost-arrested Thiel has to talk about all of them on his blog.  Why he wants to give them credence by the incessant reporting is beyond most peoples comprehension.

The lying false prophet and self-appointed preacher then makes this hypocritical statement:


Because various ones have falsely claimed that God is sending a message through natural phenomena, they are turning people off against Bible prophecy.

Seriously?  Almost-ordained Thiel claims these people are turning people against Bible prophecy when he has done the exact same thing!  His prophecies are just as bad as the 208 documented lies of Herbert Armstrong, Gerald Waterhouse, Herman Hoeh, Rod Meredith and others.

Elijah Thiel then quotes a scripture that describes when he does precisely:


1 But there were also false prophets among the people, even as there will be false teachers among you, who will secretly bring in destructive heresies, even denying the Lord who bought them, and bring on themselves swift destruction. 2 And many will follow their destructive ways, because of whom the way of truth will be blasphemed. 3 By covetousness they will exploit you with deceptive words; for a long time their judgment has not been idle, and their destruction does not slumber. (2 Peter 2:1-3)

Almost-arrested Thiel then writes this:


The false prognosticators cause the Christian way to be blasphemed, even though (in my view) none of those I have specifically named are real Christians.

Can he really be serious?  What about the hundreds, if not thousands of false prognosticators that have littered the Church of God over the last 8 decades?  What about the lies of James Malm, Gerald Flurry, Dave Pack and those he has espoused?  Thiel, Malm, and all of the others are the blasphemers!

He ends with this:


...there are many false and heretical leaders that lead people astray on prophecy. Sometimes they mention the Bible to try to act like God sanctions their nonsense. And it is not just the secular fringe people, but also those who claim to be Christian or even in the Church of God.

What about the false and heretical leaders in the Church of God who have led and continue to lead members astray with one lie after another.  Every single one of these lying fools use their Bible to pretend that their god has validated their teachings.  It's not just the idiots on WorldNetDaiy that say these lies, it is Church of God leaders like Thiel, Malm, Pack, Flurry and others that do this day in and day out. Nothing that Thiel or Malm predicts will ever happen.  That is guaranteed!

In my books, Gerald Waterhouse should be included in those who tried to convince members that the tribulation will start 'next week.' I can still remember his sermons.
Christ did teach prophesy, but the core of what He taught was practical living.

I don't know about surviving the rapture, but my husband survived a RUPTURE (disc) and did just fine! ;-)

Gerald Waterhouse was one of the biggest liars and perverts the church has ever had.

A real prophet with a message from God would have no trouble rising to the top, and becoming distinguished from the false ones. That Bob Thiel even broaches this subject as an explanation for what has always been the typical reaction to him speaks volumes. Incredibly, nothing appears to cause him to take introspection. What would cause self-examination ("Know thyself") in others, just launches Bob into thousands of excuses.


“Over the last few months, we have had various idiots on the web that have been claiming the end was here. The latest were the ones who claim planet Nibiru was supposed to hit the earth today and kill us all.”


This reminds me of a 400-page book about such things as reincarnationists under hypnosis claiming to recall the details of past lives, people “channelling” demons/spirit guides/advanced beings/extra-terrestrials from the planet Nibiru, etc. The book's author had also written a few other books, but I don't plan to make the same mistake and read them too. People who “remember” past lives under “hypnotic regression sessions” seem to be regular, lying bums these days who claim to have amounted to something more in a past life.

The book's author started off by pretending to be reasonable and assuming that no particular belief system was more valid than another. He thought that the God of the Bible, YHWH, was just one of many gods who walked the Earth in the past. The book's author eventually came out and basically said that Satan and the demons were the friendly “good guys” who posed no threat to mankind, who loved humans, and wanted to help people by teaching them advanced knowledge, while YHVH and his angels were the hostile, controlling, “bad guys” who wanted to hold people back.

The book's author even mentioned the Book of Enoch, which seems to be a favorite of those who want to believe in angels having sex with human women and teaching them all sorts of great knowledge. My own observation in life has been that, for some reason (not sure why), it seemed to be some of the stupidest, ugliest, most immoral, and disgusting women on earth who liked the idea of angels having sex with human women. Maybe the prettier girls were already getting hunky guys and did not need to fantasize like that.

For all the talk about psychics and channellers in contact with demons/discarnate beings/spirit guides/the gentleman up(or down?)stairs/advanced beings/extra-terrestrials from the planet Niburu or wherever, and all the endless talk about “advanced knowledge of the universe” and “expanded consciousness,” there was really nothing but worthless, mumbo-jumbo nonsense in the book. The overall message of the book was that God is oppressive and bad, but that Satan and the demons really have some great knowledge for you and want to help you. What is this supposedly great knowledge? None is ever given. One might have reasonably expected that people who claim to be channelling spirit beings and/or highly advanced extra-terrestrials could come up with more than just the same old meaningless blather about “expanded consciousness” that burned-out drug addicts mindlessly repeat.

The book's author was so full of dung that he should carry a porta-potty around with him.

As a very young man, I one time asked Gerald how he kept his enthusiasm giving the same sermon night after night for so long. His reply was gracious and sincere if not memorable.

"Scheduled for demolition." Is that a Douglas Adams graphic, Gary? Well played!

Martha:
The picture was on an xCOG Facebook group but is also searchable on Google.

For myself I sometimes find myself astounded by how the ancient sources reached most of those conclusions about the interaction between the "higher beings" with "the lower".

Especially the part in the bible where the Yahweh God seems to set a tree of knowledge off limits has always been particularly upsetting to me as a kid.

Now I understand why knowledge must be sealed to the commoners.