Sometimes the Bible in the hand of one man is... 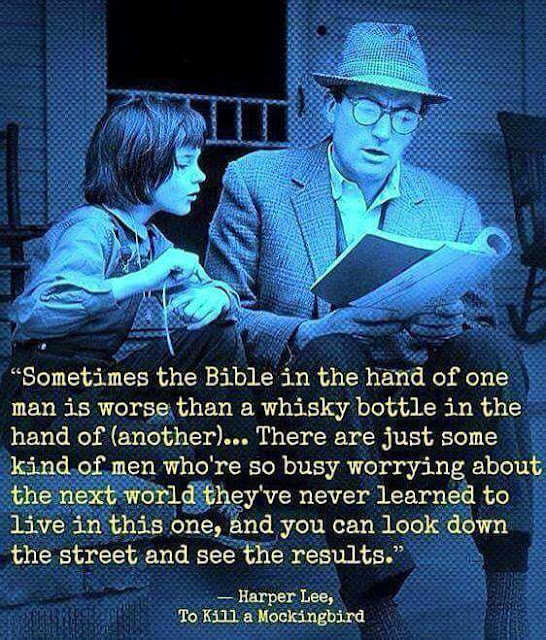 The same could be said of any book.

Or you could go to LCG or PCG, where your minister gets a lot of use out of both his Bible and his whisky bottle.

Curious George never commanded me to obey him and believe and do ridiculous things Troll.

so true, so true....many twist and pervert the scriptures to their own end, pushing such things as christmas, easter, eating the unclean things, etc, etc, convincing people that they should ignore God's instructions...

sad thing is, those folks think they are so righteous and loving.....

While this statement applies to some religionists, the really malevolent ones are somewhat different. The latter do not worry about the next life. They are wholly focused on maximizing their hedonistic goals in this life. They display no evidence that they believe they will be held accountable in the next life for what they do in this life. They do leverage the concept of the Christian after-life because it plays an effective role in their grasping at personal gain, without really having their behavior influenced positively by it.

To them, both the Bible and the after-life are just temporal means that they extensively manipulate to achieve temporal ends.

Anon 755
They also push chosenness over unchosen. Called over uncalled. We not you and love God/Jesus or they will burn you alive in Him...amen

Not to mention epic stories that never happened and eyewitnesses , falsely so called, who really weren't. ;)

It's like "You shall(must) live the Lord they God with ALL they heart n mind..." being akin to "You MUST relax" The MUST stresses the sincerity of the love as it does the concept of RELAX.

Although I am not religious, I don't go around bashing somebody else's beliefs unlike most atheistards who seem to have a very unhealthy hatred towards Christians who simply want to do good in a wicked world. You mistreat people you know will not try to fight you but I believe you don't mistreat a muzlim because you know they will fight you to the death. So go ahead with your words of hate which is bordering on hate crime in the eyes of the law.

8.19 AM
There is another category. Some Christians have 'waved the white flag,' ie they have given up trying to qualify for eternal life. They know that God will hold them accountable for their mistreatment of others, but it doesn't hold them back.
This is my observation and personal experience.
Some are deterred though. I assume it has to do with their temperament.

If you understand that the Bible is nothing but a collection of writings by a multitude of human beings and not a book inspired by a divine being, then the fact that there are so many historical inaccuracies, contradictions and outright fictional events and people depicted in its pages makes perfect sense. If God is not the author of confusion then why is the bible such a confusing book if he inspired every word of it?

Sock puppet no one is attacking Christians. It's the Owners Manuel some notice problems with

All a Christian has to do is be a good person as defined by the beatitudes combined with the ten commandments. Step away from the ACOG cults and life can be rather fun.

Ed, may I suggest that the so-called “confusion” that you may find in Scripture is from reading the Bible through the lens of modern-western thought-forms and not giving enough consideration of ancient near-eastern thought-forms.

Here are four observations that I find relevant in this regard:

"One of the greatest obstacles we face in trying to interpret the Bible is that we are inclined to think in our own cultural and linguistic categories. This is no surprise since our categories are often all that we have, but it is a problem because our own categories often do not suffice and sometimes mislead" (John H. Walton, Genesis, NIVAC, pp.67-68).

"It is characteristic of Hebrew literary style to state a preference of one thing over another in terms that sound like an absolute dichotomy to our Western ears (see G. B. Caird, The Language and Imagery of the Bible [Philadelphia: Westminster: 1980], pp.110-7)" (Craig C. Broyles, Psalms, Robert L. Hubbard Jr. & Robert K. Johnston, OT Editors, New International Biblical Commentary (NIBC), (Peabody: Hendrickson Publishers, Inc, 1999), p.192).

"The prophetic charge consists of a series of clauses whose sense is not always clear and whose arrangement is certainly not logical by Western standards" (Daniel I. Block, The Book of Ezekiel Chapters 25-48, NICOT, p.587).

“The overthrow of Gog and his forces is here retold in different language and in fuller detail. This is typical of Hebrew poetry and of the kind of semi-poetical writing which is used in these oracles. It is fond of repetition and delights to revert to previous statements and enlarge on them, even though the result is to destroy all sense of consecutive arrangement. Failure to appreciate this has led many Western commentators to find doublets, contradictions and inconsistencies, and so to assume multiple authorship where this is quite unnecessary” (John B. Tyndale, Ezekiel, TOTC, p.247).

Starting off this thread of comments, Troll said, "The same could be said of any book."

Not really. Depends on how heavy the book is, and whether it's paperback or hardbound.

Ed, your reasoning regarding the Bible is simplistic, but it does allow one to comfortably disregard the book as a meaningless collection of writings. However, if one looks at what the Bible actually has to say about the way it was written, inspiration and how it works, then it becomes harder to summarily dismiss its content.
Human communication is a complex process that we are still studying and learning about (in the way it's transmitted, received and interpreted). Add to that the understanding that inspiration is depicted in Scripture as a joint venture between human and Divine, and one immediately realizes that error, contradiction and fiction are not automatically excluded from the process. God may not be the author of confusion, but you won't find many humans who would claim that we are immune to the phenomenon.

GOOD QUOTES FROM TO KILL A MOCKINGBIRD...

>>“Atticus said to Jem one day, "I’d rather you shot at tin cans in the backyard, but I know you’ll go after birds. Shoot all the blue jays you want, if you can hit ‘em, but remember it’s a sin to kill a mockingbird." That was the only time I ever heard Atticus say it was a sin to do something, and I asked Miss Maudie about it. "Your father’s right," she said. "Mockingbirds don’t do one thing except make music for us to enjoy. They don’t eat up people’s gardens, don’t nest in corn cribs, they don’t do one thing but sing their hearts out for us. That’s why it’s a sin to kill a mockingbird.”

>>“It’s never an insult to be called what somebody thinks is a bad name. It just shows you how poor that person is, it doesn’t hurt you.”

>>“I think there's just one kind of folks. Folks.”

Cool. This is the kind of topic that generally gets the Armstrongite treatment, the mainstream Christian treatment, and the atheist/agnostic treatment by various participants.

Herbie Hog Jowls always used to say that it isn't the thing that's good or bad. It's the use of the thing, and ol' Herb did a good job of demonstrating some of the bad usages. Anything in the hands of a power-hungry fanatic can be made into something bad.