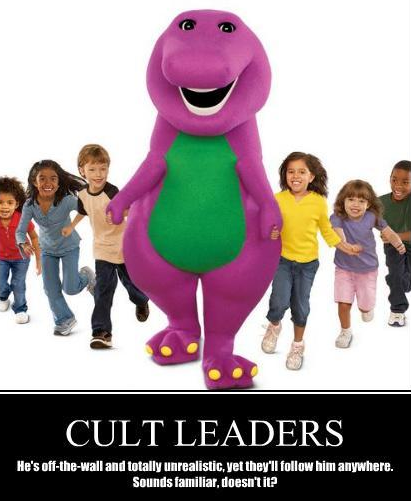 A woman who was a member of Gerald Flurry's personalty cult, the Philadelphia Church of God, relates what she had her family experience in her  22 year membership in the PCG.

She writes what everyone who has been part of Armstrongism has experienced.


When you first come in, it looks so good--lots of friends, laws to live by that seem to promise happiness. All is well--until they think you didn't do something they said to do. Then you're constantly watched as they can't take the chance of you thinking for yourself and breaking rank. Just the smallest thing is suspicious. Then comes the threats. You can't be part of this if you don't follow suit. They begin to instill fear. After that you're hooked. But you keep going on and on because all your friends are there, all your money goes there, and your children are in there.

They have cut you off from the world ever so gradually and replaced everything and everybody with them only. The constant fear of being put out and not "making it into God's Kingdom" keeps you from leaving. You will do anything. Your hope of a lifeline to someone on the outside, to get out, is gone. You have alienated everyone in your family that could help you to get out. You're constantly talking about prophecies and that "we alone" are called and going to the "place of safety" and that no one understands but us in the "true church." It really turns others off.  Giving the Reigns of Our Life Over to Someone Else


Fear is the only way the leaders of all the Armstrongite splinter groups stay in power.  By threatening a member with the lake of fire and eternal damnation for going against them, it scares people enough to keep them submissive and weak.

Cultwatch says this about fear:

Cult leadership is feared. To disagree with leadership is the same as disagreeing with God. The cult leaders will claim to have direct authority from God to control almost all aspects of your life. If the cult is not a religious group then questioning the leaders or program will still be seen as a sign of rebellion and stupidity.

Guilt will be used to control you. Maybe the reason you’re not making money is because you’re not “with the programme”. Maybe the reason you’re not able to convert new recruits is because “your heart is prideful and full of sin”. It could never be that the programme isn’t working, or those new recruits have valid reasons for not joining. It’s always your fault, you are always wrong, and so you must try harder! You will also be made to feel very guilty for disobeying any of the cult’s written or unwritten rules.


.....pathologically narcissistic. They all have or had an over-abundant belief that they were special, that they and they alone had the answers to problems, and that they had to be revered. They demanded perfect loyalty from followers, they overvalued themselves and devalued those around them, they were intolerant of criticism, and above all they did not like being questioned or challenged. And yet, in spite of these less than charming traits, they had no trouble attracting those who were willing to overlook these features.


"Pathologically narcissistic" is a great description of the leadership of almost all the Church of God's.  One needs to look no further than David C Pack and Gerald Flurry to see these traits blatantly obvious.

On a Facebook page recently, a person wrote that they witnessed a scene with David C Pack that left them appalled.  It seems a group of young men and women were standing around waiting for Dave to arrive.  When he did, the guys rushed to see who got to open Dave's car door first as they shoved the women aside.

Demanding extreme loyalty is the only way these men stay in power.
Posted by NO2HWA at 2:24:00 PM

Critical and introspective thinking is not a trait most RCG,PCG members seem to have. Do, think and be as you are told. What a pathetic life to live.

You can dress these men up in suits, listen to them be clever with scriptures, however inaccurate and present themselves as special beyond measure, but you can't hide mental illness forever behind the mask of religion.

It will end badly

And one you left out from the Orange Papers: The guru is insane.

And I believe that these people who run tithe farms have to be so. Who in their right mind would want harm people day after day?

All the COGs manipulate members. It is just a matter of the degree of manipulation. The UCG is much more subtle but has a agenda of mind control. The mind control of the PCG and RCG is much more easy to see and is more intense. Does that make the UCG a health church to belong to? In a way the UCG is more dangerous because it is more likely that the membership will see it as a health church in comparison of the more extreme COGs. But the fact is that the UCG is far from being a healthy church.

I still struggle with anger over this. Flurry and the ACOGs have imitated faithfully what they observed as the primary motivator behind old school Armstrongism. Fear and the SYA mentality were there from the very beginning.

Honestly, what humans do out of fear is reflexive. It has nothing to do with character, love, or anything else that comes from deep in the soul. Fear compliance is also much like pain compliance in that to continue to be effective, the fear must constantly be escalated. I was fortunate, as were others from the 1970s because when HWA failed to deliver the Germans, we realized that there was nothing left to fear, and that the place of alleged safety was pointless and unnecessary. We did watch from the sidelines, however, as numerous others willingly accepted reprogramming, and have continued to accept reprogramming now for the past 40 years.

It is pathetic that each of these groups actually believes that they will exclusively be the inhabitants of a place that has long since outgrown its capability of even being a place of safety. The time and date stamp expired on Loma's pipedream a long time ago.

My advice to ACOG members would be to remember that perfect love casts out fear. That means that people who use fear as a motivator neither have, nor know how to use love. Better to find a loving environment, where they can thrive, and have peace of mind.

UCG is not a perfect church. There has never been one. I'm a college grad and a very critical thinker. I openly question very thing. I did this in WWG and continue to think for myself to this day. I have never been threatened and am not afraid to speak my mind in a civilized way to the minister or to Headquarters. I can debate you on any issue. I don't defend any leadership abuse when it exists. I deal with people on my job in very high places of our government. Some are good and some not good. Leadership problems are not confined to churches.

Does that make the UCG a health church to belong to? In a way the UCG is more dangerous because it is more likely that the membership will see it as a health church in comparison of the more extreme COGs.

Although some regard the UCG as a healthier alternative to Packland and Rodland, it still promotes a cancer of the mind.

Ingesting a pack of Pack's pack, or a pack of Rod's rods isn't less carcinogenic than a Holladay one might think he's on when smoking Viceroy Victor Kubik's venomous product.

(Despite any cancer-infested UCG Marlboro Man cowboy with Jelly on the brain who professes otherwise.)

22 years is the time it took me to start coming to my senses, and the debacle of 1975 put the icing on the cake for me as well. Once I saw it was all a big farce, it was all over as far as I was concerned, It's taken decades for me to evolve into the humanist atheist I am today.

Hello from The Wanderer

One the subject of softer Armstrongism...Do you(all welcome to respond) feel that COGWA is same? I notice you mention UCG, RCG, etc but not COGWA (unless I missed it). I was recently reading an article about "success" on their Life, Hope Truth and it seemed plausible until it listed Armstrong's "Seven Laws of Success...I immediately stopped and closed out. This, to me and my experience, from a group that kept many from dreams, life etc. The actual accounts I have read on your site...are truly heartbreaking...talents buried, opportunities...I just don't understand how COGWA or any can go there.

Sorry for the purge..but...I am deciding (slowly) that it's just time to get on with life..I (too) mourn the loss of myself.

Thank you all for your time and patience

COGWA is just as deceptive, sick and spiritually bankrupt as LCG, PCG, RCG, UCG, and the rest of the splinters. COGWA is now looking to shack up with Brian Orchards splinter cult that broke off the Hulme cult. The entire COG system is incestuous.

>>One the subject of softer Armstrongism...Do you(all welcome to respond) feel that COGWA is same? I notice you mention UCG, RCG, etc but not COGWA (unless I missed it).<<

Why is COGWA mentioned less? I think this is largely because it was established so much later then the other major splinter groups.

Also its acronym is longer.

Also, you've got what some might see as an innocuous splinter of an innocuous splinter. Of course, that judgement is based on relativism, and the perception that there are far more toxic or dangerous splinters that we need to be addressing and combatting. If you are trying to win a war, most of the time best strategy is to take out the worst, or most threatening first, because those elements present the most immediate danger to the greater number of people. UCG and the COGaWA aren't the lightening rod that PCG and RCG are.

The CoGWA is nastier and more dogmatically stringent than UCG (which, apparently thinks that for people with health problems, it's OK to eat and drink on the Day of Atonement -- just try that in the other Cult of Herbert Armstrong Mafia Sects, which would see it as relegating the Feasts and Holydays to irrelevance, and rightly so) and the CoGWA also seems to have taken a slightly higher proportion of stalkers with it (evident, but difficult to know definitively).

Let's just say that if the leaders in any of the sects of the CoHAM came from Satan's College (A.C.), don't expect much from those sociopathic demons corrupted by a totally dysfunctional system.