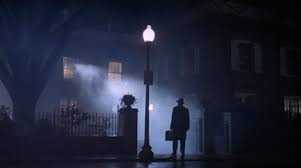 Dave Pack is also the world's greatest exorcist.  Is there anything the man cannot do...at least in his own eyes?  It is a shame he cannot discern the demon staring back at him every morning in the mirror.


“…and in your name have cast out demons? and in your name done many wonderful works?” Now, let me stop. These are many who cast out demons. I finally understand why it talks about that. I knew, personally the two men…and I’ve explained this before, who knew more about casting out demons than any ministers in Worldwide. If you put me in there, the three of us cast out more demons than probably any other 300 ministers, because I had those two fine mentors, Frank McCrady and Jim Reyer. The first man is deceased; the other still alive at age 85.
And most ministers avoided demons like the plague. This is not something that’s common. Rarely did anybody ever, ever cast out a demon. They tended to explain them away as psychological problems. I remember being at a Feast, as early as 1976, when a minister senior to me said, “Go get Dave Pack”—and I was only twenty-seven years old. But from then on, and before that really, because these men were so close to me…those two gentlemen…I learned most men did not deal with demons. They didn’t recognize them. They didn’t discern them, which is a gift. If you’re in the Body of Christ, discerning of spirits includes demons. They never dealt with them, so who are the many who cast out demons? And the many who did many wonderful works? Before I answer that question, verse 23 is shocking…

No, pack has it backwards: He was trained by the two greatest demons and has the ability to discern exorcists.

Dave dealing with demons? Gives new meaning to the old phrase, "It takes one to know one!"

In a sermon, GTA claimed he could discern spirits. His proof was that he once saw a "strange woman" and declared "she has a demon". Does Dave have better proof than that?

PAY NO ATTENTION TO THAT MAN BEHIND THE CURTAIN...

If you were in Dorothy's shoes (or should we say slippers?), the name the Wizard of Oz would sound magical. Who is this grand Wizard of Oz? He must be amazing, right?

Well, it turns out the Wizard of Oz isn't all he's cracked up to be. When Dorothy, the Tin Man, the Cowardly Lion, and the Scarecrow all find the Wizard, they hear a loud voice booming all around them, telling them to come back another time. It almost sounds as if the Wizard of Oz is some kind of god, sending his message down from the clouds.

But then Toto, Dorothy's dog, discovers that the Wizard is no god. In fact, he's just a guy operating a bunch of controls behind a green curtain. When Toto rips the curtain to the side, the Wizard of Oz realizes he's been found out, and tries to cover it up by shouting over his loudspeaker, "Pay no attention to that man behind the curtain!"

DAVE PACK, you are no wizard, elijah, exorcist, or anything else. Indeed, we will " "Pay no attention to that man behind the curtain!"

Frank McCrady? Another my way or the high way kinda guy. That explains Dave.

PS. There are no demons to cast out. Only mental illness and imaginary or real human foes in the life of the ignorant and blind to their own annoying personalities

So schizophrenia or bi-polar conditions are actually demons? You can have diseases of the body like leukemia or diabetes, but somehow a disease of the mind must be discerned as demons?

Once again, Dave has taken something that is impossible to verify, and has used that to "prove" his spiritual superiority and right of ascension to HWA's pretend throne. Like Bob Thiel, he uses a dead man as one of his references.

Demons, demons everywhere...
Gotta demon bothering you? Who ya gonna call? Why, Dave Pack of course.

Y'know, in premodern times psychological problems were often attributed to demon possession, which tells us what sort of mindset Dave exists in.

"They tended to explain them away as psychological problems."

And here I thought Dave just had psychological problems.

On a more serious note, if God can exist, so can angels, demons, and who knows how many gods. Its not a stupid theory. Maybe YHWH is just a member of the council of gods. Nobody knows. The Jewish liars who wrote the old testament didn't know and neither does anyone else.

James Reyer was a total ass. An arrogant SOB, like so many. He loved to tell single women who might have a baby before marriage that their child would never be in the kingdom. That was the curse they brought on the child for their sexual behavior. Imagine a mother hearing that shit about their child. Reyer can rot in hell along with the rest of the abusers.

I"d think you'd probably also find Gospel Jesus somewhat naive about mental illness and epilepsy as those he put "demons" out of had all the symptoms of what today would be considered such problems. Luke's Paul on the Damascus road behaviors are classic temporal lobe epilepsy. Seeing bright lights, hearing voices with religious content. Classic!

Sure he can spot a demon. Takes one to know one.

Although you'd probably agree Luke likely made the whole thing up or was reporting popular hearsay as some sort of historical fact.
Since Paul never described any such event in his epistles, merely using the ambiguous language "he appeared to me also", meaning who knows what.

I'd be more impressed if Dave had studied under Muddy Waters or Buddy Guy. At least then he wouldn't be running all over the place seeing demons everywhere, and claiming that only he could get rid of them.

If Paul suffered from temporal lobe epilepsy and this was the cause of his vision, wouldn't he have interpreted his experience as just another seizure, especially considering his anti-Christian mindset? If someone has migraine headaches and the experience the strange aura just before its onset, wouldn't that person interpret it as an approaching migraine and not a message from God? Paul hated the Christians, and he would be more inclined to deny a vision from God than to accept it.