THROW OUT THOSE BIRD FEEDERS! 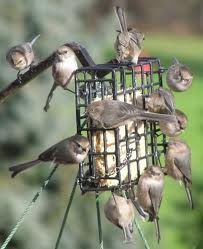 Demon Birds!
On Yahoo there are several groups that pretend that they are preserving all things HWA (pre-1986 of course).


There was this little gem today about birds.  Of course it had to bring in Harry Potter.


What amazed me was seeing a picture of a WAREHOUSE full of little stands (for a garden, perhaps) (just for Jerusalem!) where the idolaters would put bread crumbs or "cakes" for the Queen of Heaven, who, naturally, sent the birds to bring the offering to her. :)  Hm, how many of us have bird feeders?

Or, as Jesus put it, the birds nest in the tree. Birds are a symbol of evil throughout the Bible, from the dream Joseph interpreted to "the bird that carries tales to the King's ear" to the birds that snatch up the truth when the seed falls to the earth.

Of course, birds themselves are not evil--they are simply a part of God's creation and do what birds do. It is instructive to note that many evil people use owls, eagles, and other unclean birds as talismans (like Harry Potter and his mail-owl). ;It's as if they instinctively thumb their noses at God.

So, has anyone seen or read Harry Potter's Deathly Hallows? Does he combine into the powerful, evil wizard who keeps trying to kill him? You might read that as symbolic of God trying to win over Satan, similar to the Superman story.