The Truth Shall Make You Free: Chapter 8 Beginnings of Lawsuit 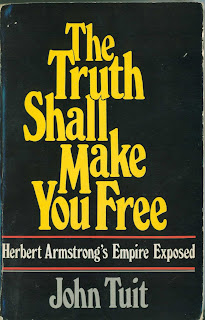 Thank you for posting these excerpts from the Truit book, I have been reading them - sometimes tearfully.

Thank you for posting excerpts from the Truit book. I have been reading the posts - sometimes tearfully!

Thanks. The sad part is that these men and women were made out to be such pariah's because they dared to question the Church leadership and operations.

Also sadly, there are no men and women of integrity who will do such things today in order to expose the corruption in the Philadelphia Church of God, Living Church of God or Armstrongism it's self. The brain washing has been successful!