Van Robison on "Are You Offended Because Many Challenge the Validity of the Bible?" 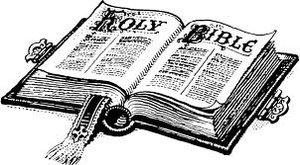 Are You Offended Because Many Challenge the Validity of the Bible?


Searching for answers does not mean that one must automatically accept that the entire Bible is pure truth.  Nor does it mean that everything in the Bible is fiction.  Some don't like what they call "cherry picking", but who reads a newspaper and believes that everything in it is true, or that it is without bias?  It is very true that none of us would believe in Jesus Christ without the four Gospels and what we read about the life of Christ.  It has been passed down from that time forward.    We can either believe that Jesus Christ in fact is real and did exist or alternatively we can choose to not believe.  Either way, Jesus Christ has never appeared to any of us in a physical and visible form and spoken with us, so then all belief in Jesus is strictly based upon FAITH.  It is more than obvious that there would be no faith in Jesus without the Bible.  Still that does not make everything penned in the Bible---truth, as apologists want everyone to believe.

For those who want to believe that the Bible is 100% total truth, you have to admit that you only believe that based upon "faith" and not because you can prove it.  Many attempt to prove the Bible is infallible and inerrant, but it is impossible to do so.  Quoting from the Bible itself is not proof that it proves itself, simply because any human writer throughout history with pen in hand could write "thus saith the Lord" or any type of similar saying and then proceed to pen anything they wished to that phrase in an attempt to cause the readers to believe that God was the author, when He was not.  Like anyone I also quote from the Bible.  If faith in Jesus Christ hinges totally upon the belief that everything in the Bible from cover to cover is absolute truth, then it seems to me that those who think that way, do not really place faith in Christ, but in INK on PAPER.

There are two books in the Old Testament that do not so much as mention God and yet we are suppose to believe that these two accounts are "inspired" by God?  As with everything else, I have read how Bible apologists defend this issue, but it does not hold water.  The word "Easter" is found in the New Testament and it is a very obvious and flagrant insertion and not based upon the real meaning of the word from the original.  Should we deny Jesus Christ because even one word in the Bible is found to be a complete fraud?  The idea that you "cannot" believe in Jesus Christ "unless" you accept that the entire Bible is the infallible and inerrant word of God, is simply not reality.  I for one do believe in Jesus Christ as Lord and Savior, and at the same time I discount that many things in the Bible are inspired by God.  What is the real reason people are offended by those who question the validity of the Bible in many parts of it?

Some sources have published entire books about the origin of the Bible and as with all other issues in human life, there are disagreements and differences of opinion.  On one side there are those who publish books in
defense of the "inspiration" of the Bible and then there are those who publish books dealing with many of the issues in the Bible and challenging what is said.  Often times it is the Bible apologists who attack the person
rather than confronting the subject matter and issues.  So when those who challenge subjects in the Bible such as who really authored the first five books of the Old Testament, the worldwide flood and Noah's ark and many other issues, the authors are often slandered.

Is it possible to confront facts, rather than to deal with issues on an emotional level?  We see the identical tug-of-war with "Biblical" archaeology.  On one side, there are those who publish their "findings" and assert that they have positive proof that the Old Testament is valid history and there are those who publish books detailing that archaeology proves that O.T. history has been greatly distorted as to what truth really is.  So who do you believe? Each side cast stones at the other.  I am not sure that it is even humanly possible to not have preconceived bias.

I am not sure what the issue is with Bible apologists, because it is not sufficient that one believes in Jesus Christ, unless one also accepts that the Bible is the total word of God.  Why is that?  Again, of course no one would believe in Jesus Christ without the Bible, but must we believe that it is totally true in every detail?  I wonder why Jesus Christ taught to BEWARE of false prophets and teachers, unless such people put words in the mouth of God that are not true, and Jesus knew it.  Is what is called "the Bible" an exception to potential deception?  I wonder why Jeremiah in the Old Testament spoke about LYING SCRIBES, false prophets, false pastors and false teachers?  How much of what we read in the Bible came from such sources?  So we read that "all scripture is given by inspiration of God" and yet we have no clue exactly what that "all scripture" is, that is supposed to be inspired by God.  The writers and those who compiled the many different writings into one volume and called it "the Bible", could just as easily have inserted many other works or deleted from some texts they included and they would still call it the "Holy" Bible and people would believe it.

I seriously doubt that God Almighty sat down at His desk, penned the Bible in His own hand writing and then sent it to earth by Fed-Ex or Ups.  Did He really dictate word for word what we read, to those who penned it?  I would suggest that if anyone believes in Jesus Christ, while doubting Bible infallibility, then that is OK.    In fact if one wants to be an atheist, that is their decision.  No one but God Himself really knows all truth and I have no doubt that there is no human being who ever lived, apart from Jesus Christ who understood then or now what all truth is.  Casting stones never serves a good purpose.  Jesus even stated once, that he that is without sin, let him be the first to cast a stone (talking about the woman taken in an adultery).

To proclaim that if one does not believe the Bible from cover to cover is totally inspired by God, misses the point that Jesus Christ never taught such a belief.  In fact Jesus Christ never mentioned a book called the New Testament, which was penned many years after the life of Christ, nor did Jesus mention the name of a man called the "apostle" Paul, or speak of a book called the book of "Revelation."  We all have an emotional attachment to what we want to believe.

Email ThisBlogThis!Share to TwitterShare to FacebookShare to Pinterest
Labels: Armstrongism, Questioning the Bible, Validity of the Bible, Van Robison

From my completely secular perspective, the Bible is a fascinating anthology of Middle Eastern folklore, mythology, poetry, fiction, meditative reflection, sermonizing, surreal fantasy, polemic, and pseudohistory. In this framework the question of "validity" does not arise for the same reason that nobody ever thinks to ask about the validity of *King Lear* or *The Canterbury Tales*. Viewed this way, Genesis, the book of Esther, the gospel of Luke--the whole collection--all offer the same benefits as literature from other cultures: a window into ways of life very different from our own that paradoxically reveals how similar humans in all cultures can be.

I mention *Lear* and *Canterbury Tales* on purpose because Gerald Waterhouse, in a voice dripping with scorn, often used to hold up Shakespeare and Chaucer as authors esteemed by "the world" but completely useless as a guide to man's highest aspiration: the avoidance of sin by observance of God's law, which can be achieved only through diligent study of the Bible. I got the impression he still burned with resentment over a low grade he had received in his class in early British literature.

The belief that there is only one truth and that the Bible contains it leads to nothing but trouble. Because readers' backgrounds differ and no text can be free of ambiguity, readers inevitably interpret the Bible differently. They all fervently assume that their own reading captures that vital unitary truth. At first they believe everyone else has inadvertently misread the text and fallen into error. Then some begin to suspect darkly that others have been led astray by the devil, who tricked them into reading perversely. Finally a few zealots try to cure the wicked heretics by torturing them till they recant or die. I venture to say very few people have been burnt at the stake for misinterpreting Shakespeare or Chaucer.

Readers also stifle their own pleasure by assuming that the meaning of a Bible story is both completely singular and deathly important. For an example of how ambiguity can give pleasure to those with a sense of irony, take a single line from a secular poem: Hank Williams's "Your Cheatin' Heart."

The key repeated line, "Your cheatin' heart will tell on you," can be read two ways. We can paraphrase the first as “Your cheatin’ heart will rat you out--reveal your unfaithfulness” and the second as “Your cheatin’ heart will take its toll on you.” (The noun "toll" is related in both etymology and meaning to the verb "tell.") Neither meaning can be excluded as a misreading, because all the images elsewhere in the song suggesting restlessness and insomnia perfectly fit the second meaning, and the restlessness and insomnia perfectly fit the idea in the first that the cheater’s guilt will be revealed.

If people could relax and let themselves enjoy the Bible's ambiguity like that in other literature, they could increase their pleasure in reading it. At the same time, they could open themselves to receive not a single truth, but multiple perspectives on manifold truths.