Bob Thiel: Malm, Meredith, Weinland, and Pack are all Agents Of Satan While I am the Only TRUE Man of God...... 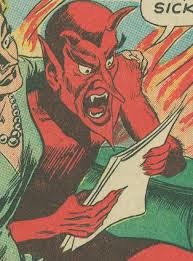 Poor Bob.  His bitterness towards Rod Meredith knows no ends.  Thiel was stung by Rod's rebuke of him over a year and half ago, so much so that he had to start the "One and Only True end time Church."

Despite the fact that Bob is not ordained and has absolutely no authority to set up a church, at least according to Armstrongite governance structures, Thiel had to self-appoint himself, knowing that no one else would.

Today, Bob is lashing out at Meredith and others, claiming they are tools of Satan who are actively promoting Satan's plans.


Have various leaders and writers associated with the Church of God promoted Satan’s plan?  Has Satan influenced various ones to help fulfill his plan?

Thiel then quotes something from James Malm where Malm jabs Thiel for his constant fascination with Mayan and Catholic prophecies.


At this point we exclaim how terrible it is to seek out a familiar spirit [demon] about the future or anything else.  Yet we do exactly the same thing in the church of God groups!  What do I mean with the statement?  I mean that whenever we study the teachings of false religions or of worldly men and apply them to keep them, instead of going to the word of God; we are turning our backs on the word of God to consul with familiar spirits [demonic] spirits.


How many of you consult horoscopes in the local papers?  How many COG groups beginning with HWA, turned aside from what Jesus Christ commanded us to preach, in to a worldly business model organization and outreach?  How many organizations use the Roman Catholic Beast government [adopted by HWA after Loma's death] system for church leadership?


There is even one man who left LCG a year ago who styles hiself a prophet, who voraciously seeks out and studies the prophecies of every false religion that he can find, in order to find support for his own false prophecies. (This is the comment that ticked off Thiel)


Do we not realize that learning false doctrine and prophecy to follow it, is turning our backs on the word of God to embrace the ways of the enemy of God? (Posted 01/18/14)

Then Thiel justifies his prophecy peddling by this:

James Malm is promoting Satan’s plan in several ways.  First of all, I do not seek out false prophecies to find support for my supposed false prophecies, thus he is bearing false witness.  And he should know that, but does not seem to care how he tries to ‘spin’ my writings.

Thiel is not truthful when he makes such comments. Thiel searches out everything he can find that fits his own perverted understanding of prophecy - all of which he got from the perverted understandings of Armstrong, Meredith, Hoeh and others.  Any "pagan" prophecy that makes his end-time malarkey seem valid, Thiel uses.  Thiel is more than preoccupied with Catholic and Mayan prophecies, so much so that he keeps writing books about them. Thiel puts more validity into Catholic prophecies than even the Catholics do!

Theil then claims that all of Malm's prophecies have failed too, because unlike Thiel, Malm is not using the CORRECT way of understanding prophecy as he does.  Thiel thinks that by using another failed Armstrongite preacher, David Jon Hill,  that he too is a proper prophet.

He, and others, who insist I misuse non-biblical prophecies simply do not understand who the old Radio Church of God taught them, which is the same way I do (see Hill DJ.  Christ or Antichrist.  Good News magazine, Radio Church of God, April 1961; also see the article Satan’s Plan).


Thiel then claims that he alone has denounced the false prophecies of Malm, Pack and Weinland.  Thiel fails to understand is that every single person with a COG background with ANY common sense  can quickly see that the prophecies of these men are not true.  Every single one of  us here understands that!

Thiel then has to attack Rod Meredith, AGAIN, by claiming he and the others that pick on him are all agents of Satan

Apparently James Malm and other critics of mine believe that Philadelphia Christians should be ignorant as various ones, including Roderick Meredith, have publicly criticized me for this.  An odd thing about those two, however, is that they both have referred to non-biblical prophecies, yet have condemned me for that.


Satan is using these men, and I assume us, in pointing out the fallacies of Bob Thiel.  Its nice to know that Bob is without sin.

None have convicted me of sin, though people like James Malm, Roderick Meredith, and David Pack have falsely accused me (Ronald Weinland has as well, but his references were a bit more subtle).


Using lies, false prophecies, and character assassination have long been part of Satan’s plan to stop people from listening to God’s prophets throughout history.

Lets do some quick math here...

That means that there are 6,999,975,000 people that Malm and Thiel can evangelize that have never heard of their nonsense, yet they fight and battle and worry over what a mere 25 thousand people may think, and frankly, probably less than 5 thousand of those 25 thousand even know who Malm or Thiel are either!

On a percentage basis, this means that 99.0000035 percent of mankind has been unreached by Malm or Thiel. Cant these guys find something better to do than to keep bringing their little Soap Operas to this tiny group of COG people?? Honestly! Talk about fighting over a crumb! Find some purpose!

You know, people might pay more attention to Booby Thiel if he were to -- not unlike Gregory Johnson, the American oceanographer -- write his church of God news in Haiku, accompanied by watercolor paintings.

It shouldn't be hard for someone with a PhD... if he has one -- I mean a real one, you know, like one from an accredited University in the United States (but not like Ambassador University which proffered such degrees as worthless as anything but toilet paper).

Rise to the challenge, Bob.

There is an oft observed phenomenon of victimology. A certain percentage of victims turn their experience inside out, and begin acting as exactly the kind of predator that victimized them! Any empathy they once held for fellow human being is destroyed as they go about inflicting the pain they themselves experienced on other innocents.

Anyone else believe this has a multi-level parallel within Armstrongism?

If not for Satan, they'd have no one to blame for their crappy failed efforts, poor numbers in membership and finances, splits from their churches, their failed prophecies, their dubious biblical 'truths' being challenged by more educated people, their hatred of other religions and viewpoints, and the list goes on and on.

Heck, these guys should get together and give Satan a prize for all He's done for them... some nice pieces of Steuben Crystal, perhaps?

And, it ain't confined to the COG's either. Dennis recently mentioned a megachurch near him, where Pastor Ron Carpenter is in hot water. The cause? Pastor Ron says it all because of...
...wait for it...
"SATAN!"
Why?
Pastor Ron claims it's because he's so "high up on the totem pole" that he's a big target of SATAN!