Judge Says Stephen Allwine Was "incredibly cold and incredibly calculating" and "My perception is that you are an actor," during Sentencing Hearing. 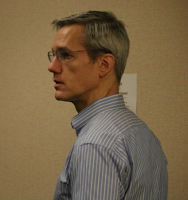 Stephen Allwine was sentenced to life in prison today and received a stinging rebuke from the presiding  Judge. 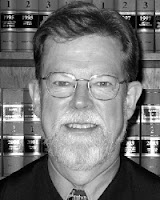 The Star Tribune is reporting that their son, who Stephen deliberately let find his dead mother, has made a statement:


Amy's sister, Julie Brown, read a victim statement in court that included a comment from the Allwines' son, who was 9 when she was killed.
"My mom was a good mom. I will always love her and remember her," the boy said.
Statements also were read by Amy Allwine's brother and on behalf of her parents.


Stephen Allwine Sentenced To Life In Prison For Murdering Wife

Prosecutors successfully argued that Stephen’s motive was to collect his wife’s $700,000 life insurance policy, of which he was the sole benefactor.
Allwine will be soon transferred to the St. Cloud Prison to serve his term.


Amy's family related to the court how they live in fear of Stephen after Amy was killed as her parents reveal how they felt betrayed by him, especially after they let him live with them for two months after Amy's death.


Amy Allwine's family described the terrifying final months of her life in their statements.

The summer before her death, Amy Allwine received anonymous emails graphically threatening her family's lives and urging her to kill herself.

Prosecutors said the FBI contacted the family about the emails at the time.

A forensic search of Stephen Allwine's computer revealed searches for the names and addresses of his wife's relatives.

Brown said her sister "lived in fear every waking moment of the last months of her life."

Stephen Allwine lived in the Zutz's home for two months after his wife's death, the statement said.


"My perception is that you are an actor," Ekstrum told Allwine.


Very good perception. The Greek word for actor is hypocrite.

Allwine indeed is a very scary guy. According to news sources he used the name "DogDayGod" as a moniker and internet address.

One of the definitions for a "Dog Day" from wikipedia is a "fever, mad dogs, and bad luck." Allwine then added the term "God" to his bizarre Dog Day. Very weird!

Also he used an interesting email account that is used for anonymity. HMA.com . Very close to HWA.com is is not? The HMA apparently stands for "Hide My Ass".

Everything about this guy points to him being a very conflicted and bizarre psychopath. Demonic is a better descriptor, and thankfully the truth came out and punishment is being administered.

Again, my sincere regrets and condolences to all of the relatives and to the poor 9 year old son. My prayer for his recovery and strength to carry on.

An anonymous troll recently posted that if we don’t at least consider conspiracy theories to explain things, then we are probably the real flat earthers. So in that spirit, I look at the $700,000 insurance policy, and knowing how the ACOGs are already grave robbers with regard to estates, I wonder if maybe that dastardly mentality has now gone deeper. Could it be that that’s why a mess of ACOGgers were at the trial? Could they have understood that a very special high dollar offering might have been promised? Could there have been a conspiracy in which UCG was complicit for this money? It certainly would explain certain behavioral patterns!

About a year ago, I recall reading on UCGs monthly magazine that the trunk of the moral tree are their church doctrines. This is incorrect. Perhaps this was in response to someone on this blog pointing out that the trunk of the tree is everyone having a right to life. Doctrines and a moral code are a consequence.

If The CCOGs taught that life is very precious, and the ultimate value, murder would be less likely.

My heart breaks for that boy that found his mom and has now lost both parents and probably his trust. Husbands, the very best way to love your children is to love their mom. This man, assuming he is guilty, has totally failed as a father. Fathers are to protect their children from shit like this. The whole thing is so beyond comprehension. How can you throw your kid under the bus for any amount of money or for any lover? Yes Connie, it sure looks demonic.

My mother, God bless her, would always say when we’d hear on the news of a husband murdering his wife (or vice versa): “Why not just separate or divorce their partner rather than brutally take their life?!” Whatever the motive it’s never ever worth it. And in our “48 Hours” era it’s been proven time and again the “perfect murder” does not exist! And you will NEVER get away with murder! I can only pray the deceased is resting in the peace of our Saviour Jesus Christ; that her family and friends will be assured of God’s promise, which we have in Christ who is our hope of the resurrection and be comforted by the cherished memories of their loved one; and finally that the murderer will be led to repentance through Christ who alone is the True Way of Everlasting Life. Amen.

In the wake of Stephen Allwine's conviction and sentencing, is LCG gloating, or just showing incredibly poor taste, by publishing an article today titled Jailbirds?

Most murders go unsolved. This guy was just stupid. And blah blah blah on the benediction. If it were not for man’s law, this guy would have got away with it because the imaginary judge in the sky sure doesn’t intervene. I think he will be a big pussy in prison.

Anonymous 2/3/18 11:31 said..."Most murders go unsolved. This guy was just stupid. And blah blah blah on the benediction. If it were not for man’s law, this guy would have got away with it because the imaginary judge in the sky sure doesn’t intervene. I think he will be a big pussy in prison."

You're obviously speaking from a fool's perspective (i.e. "The fool hath said in his heart, There is no God") :-)
But, speaking as a Christian I am of the belief that irrespective of whether a murder is "solved" or not in this age the Eternal Father knows all and if a person (or group of people) are guilty of such heinous crimes the Supreme Judge of the living and dead will meter out His perfect justice in due time even if it's after such murderers have lived out their lives thinking they've got away with murder. I can assure you when they meet their Maker they will know then that they assuredly did not!

Lastly, I'm thankful that the American Founding Fathers based American jurisprudence on Biblical Law (i.e. the Ten Commandments of God Almighty) hence it's because of the Sixth Commandment prohibiting premeditated murder that murderers are charged, tried and sentenced to either imprisonment or death. It might not be perfect justice, but then humans aren't perfect and a cloudy day isn't midnight is it? And just because God chooses not to intervene at the moment doesn't mean He never intends to. He IS God and He has sole prerogative to do whatsoever He pleases and whenever He pleases. So don't misjudge Him just because His actions don't fit with your preconceived notions, indeed misconceptions, of how He should or when He should act.

Fy. I said no intervening god. Did your pretend god write the 10 commandments on stone tablets for muses? Really? And just because you believe it, that doesn’t make it truth, a common problem that brainwashed religious minions have. If you had been born in the Middle East you’d be reciting the Koran and wearing a burka. And you can’t assure anything about you he afterlife and you imaginary man who sits around watching everything and everyone. So delusional! The minister who killed his wife is no different than any other human, only he thought he was so smart that he thought he could get away with murder. And these ministers all think they are some special enlightened privileged white men, their true only god in the world has their back. Ha! You are the fool for buying into this whole religious system. After all the history, all the evidence, all the information to the contrary you still believe in magic. Revealed religion is a fraud and it’s time to move on. Ethics and decency are better guides than religious law.

And many American founding fathers were deists.

see, the sentence for this murder demonstrates the difference between the secularists and the believer: allwine would be sentenced to death under the Law of Moses...

An anonymous troll recently posted that if we don’t at least consider conspiracy theories to explain things, then we are probably the real flat earthers.
So in that spirit, I look at the $700,000 insurance policy ...

And you think he/she knew about the insurance policy at the time? Did anyone else know about it at that time?

And what the heck does this case have to do with conspiracy theories?

You have a proclivity to twist and misrepresent everything.

And of course, as you say, Hitler did it. It's all his fault. He's been dead quite a while now, haven't you heard?

Of course, anyone you don't agree with is a troll.

I m realy sorry but the founding fathers had NOTHING to do with the bible. The ly cited "natural law".

Therefore it was "self evident" that .......yadda yadda yadda.

125000 years ago people new that killing others at random would not enhance communal life and hamper the survival of individuals as part of a. larger community.

I could help you with what the founding fathers thought about religion and the bible if you are really interested.

You could also start yourself by visiting Monticello if you are in Virginia.