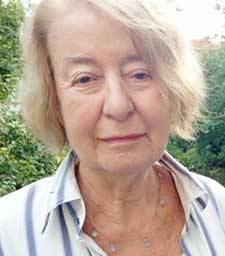 Speer's daughter and the Syrian refugees

Good post Wes. One of the other problems is there are still people who are Armstrong’s disciples and copy the arrogant behaviour that came from the top down. I was recently treated badly by a couple of this old guard who repeatedly said you had to “kiss up and kicked down”. They certainly attempted to kick down when it came to dealing with me and refuse to acknowledge their consistently demeaning behaviour. They are long time church pillars. In this dysfunctional church run by a narcissistic personality disordered man, there were the copycat abusers and the victims. It was so sick, and frankly still is. Herbert’s pride has been regarded as good. Pride not humble love is still the core of many cog people.

"They need to heal"
If you chop off your arm, it doesn't grow back. That is, there is no healing. Those who endlessly prattle about healing, are trivializing the damage done, and putting the blame for the natural consequences of abuse, back onto the victims.

Thanks for the article. All our experiences are different and the outcomes different. I had no choice but to move forward and try to bring a bit of order out of a misdirected life. The results varied, but overall, I'm satisfied with where I ended up. I made the most out of a very bad situation and don't beat myself up over those two decades of misdirection. There were reasons it all happened, and when you're dumb and deceived, you just don't know how dumb and deceived you really are.

Wes said, "For those of you who ended up on the short end of the stick after being in the Armstrong organization, please be aware that there are some who recognize the need for restitution and healing".

MY COMMENT - My family's Armstrongite involvement extends 4 generations starting in the early 1950s and includes one Ambassador College graduate and another local church elder. I was the first to leave Armstrongism way ahead of other family members although my mother never left dying as a member of Living Church of God. I have counted as a blessing many times and I have publicly thanked Ambassador College Registrar William Stenger here on Banned for rejecting my application to Ambassador College. It was pivotal in my exiting Armstrongism. I might have become "one of them". Instead, I went on to obtain degrees in Finance and Business from the University of Maryland and Drake University. Today, I wear my Ambassador College reject letter like a badge of honor.

For me, the hardest part was the family estrangement that occurred. During the Recession of 1990 and 1991, I was an investor flipping properties and got hit pretty hard when the recession hit. Like Donald Trump, I had an attorney advising me to file Chapter 11 business bankruptcy. But unlike Donald Trump, I said "Hell no, I am way too young and I will get myself out of business debt". This was 14 years after I had left WCG in 1976. My mother's reaction about my business reversals? She said, "Maybe if you would start tithing, God would start blessing you!". That statement didn't help our estranged relationship. Fast forward to 2019, I survived the Recession of 1990 - 1991 both without filing Chapter 11 business bankruptcy and without becoming a tithe slave again to the WCG. Every Real Estate Noteholder I was indebted to from the Recession was eventually paid in full through out the 1990s as I dug myself out. Today, I consider myself blessed as a successful and established real estate investor despite my WCG upbringing. I now make a full time income from my real estate investments on part-time work. I thank God for my life experiences. I never confused God with Herbert Armstrong and the WCG. I learned a lot from the Recession of 1990-1991, and I thank God for that humbling experience as well.

I once told my mother that I am NOT one of the "weak and base things". Therefore, I am NOT being called! I had my William Stenger Ambassador College reject letter as further confirmation proof.

The other hard part was being single and alone most of my adult life. I was just too weird from my Armstrongite experience to date women outside the Church. So, I didn't date until much later in life. I did not have "the wife of my youth" which saddens me to this very day. But who knows? Some other life dynamic could have happened, just like what would have happened if I had been accepted to Ambassador College. I might have become "one of them".

Perhaps you got some value out of Ambassador College/University/Whatever.

Such was not the case for my siblings and brother-in-law who graduated from Ambassador and discovered that their degree from an unaccredited college was no help in their career, since they didn't become "Misters" on graduation.

Thank you, Wes. I appreciate what you had to say. I was born into a very dysfunctional and abusive family. The church came later - in my early teen years - for the next 37 years. I was born in poverty and I’ve never known anything else BUT poverty. I’mstill in poverty. BUT...I have a warm roof over my head, food in my stomach, and a personal relationship with Him. I’m blessed. Again, thank you for your kind words.

Tess said...
"Herbert’s pride has been regarded as good. Pride not humble love is still the core of many cog people."
Over 30 years ago I was highly active in the Church and as a "reward" I was allowed to pick the subject for the next bible Study. I chose "humility" since I couldn't recall that subject in a sermon or previous Bible Study in out local church. Of course the ministerial assistant was not happy that a member would be giving him direction. So he gave a Bible Study on envy.
Because Jesus was required to sit in back of the church bus, His examples of humility and service (Truth) was ignored or just touched upon, to the detriment of the Church and its message.

216 of course it heals. You just adjust to the loss of an arm unless you enjoy keeping the wound infected

Although I have benefitted from working for a white man, I am still not over what happened to my Comanche people.

The Comanche were the dominant tribe on the southern Great Plains in the 18th and 19th centuries. They are often characterized as "Lords of the Plains" and, reflecting their prominence, they presided over a large area called Comancheria which a modern historian has characterized as the "Comanche Empire". Diseases and the deceit of Europeans decimated my people.

It is certainly true that it is not written anywhere that "life is fair". The "Armstrong empire" was certainly not an equitable or fair one either. Ron Dart used to say, that the Worldwide Church of God was the biggest failure of a Church of God from the Day of Pentecost to the present time.

When did Ron Dart say that Tonto?

I recall Ron Dart saying he thought WCG could have gone through a couple of Billion dollars in donations if you added up all the tithes over the years. He used to say that, as an illustration of how money is not necessary a means of success as it can be misspent.

Dennis posts 'of course it heals.'
An excellent example of how Herb ministers are trained in guile and word twisting. This is like the Gestapo ministers who claim to be merely 'administering Gods government.'
Dennis, the Herb ministers still see you as one of their own.

Tonto
According to the Wikipedia article that you quote from, they numbered 30,000 to 40,000, with a present population of 17,000.
They took and sold slaves, so they don't have my sympathy.

"Like Schramm, I don’t need to add to my feelings of guilt."

Who is trying to make her feel guilty in the first place? She was just a kid.

I see that James Malm has his pink tzitzit's all in a knot in his latest posting about CEM calling you a liar and a manipulator that unduly influenced Mrs Dart causing her to turn over all assets to you. You bad boy!

“They took and sold slaves...”

Glad that’s in the past tense. I’m working on the Rez tomorrow.

I really don't think my time in WCG and at AC did me much good. As a second generation WCGer, my dad more than paid with his tithes for my 'wonderful' AC experience. After we had both left he was always happy to hear of the vacations/trips I went on and the 'opportunities' I had because at least someone in his family got something out of his money.

But I don't feel I got much out of it -- a useless degree which I could not transfer anywhere else, instead of an education which might have led to a meaningful profession. Yes I went back to school and studied computer technology, nothing transferable from AC in that. And all those people who claim to have made lifelong friends and found 40 year mates, well I didn't get that either. Thankfully I didn't marry anyone from WCG or AC, or I might never have left, and would have missed a lot of the worldly friendships I had. And as for the lifelong friends, after I left they weren't allowed to speak to me, or chose not to speak to me.

ok, say I work for this guy for 10yr, then I find out he's a crook....do I feel guilty for accepting pay all those years? no, not at all.

I always thought Wes was a bit of a loose cannon, but lately I began to think that maybe he had his act together after all...this just confirmed my gut.

29 Jan: Christian Educational Ministries Lawsuit- The written, signed and witnessed will of Rob Dart willed his church assets and intellectual properties to his CEM organization. Upon his death, his wife Allison was convinced along with the will’s Executor to avoid probate and refrain from carrying out the will’s provisions, effectively stealing the assets from Ron’s proper beneficiaries.

Wes White ingratiated himself to Allie Dart who was terminally ill herself and became the beneficiary of the Dart millions [both Ron’s and Allie’s] upon her death.

CEM has requested that the courts order that the Ron Dart will be probated and the assets distributed properly according to the legal will. This request is being resisted fang and claw by Wes White who gained possession of these assets by alleged skulduggery. Wes is falsely claiming that CEM is suing him contrary to scripture, but CEM is not asking for a judgment of law, only asking that the provisions of the will be properly probated and distributed according to the law.

Wes White is an anti COG person by his own admission on various anti COG sites. Wes claims to be godly, just not a worshiper of Armstrong, and runs his “Start Our Sabbath:” program to entice the brethren, but his alleged actions and teachings fall far short of godly.

Malm likes to present himself as having the inside track to all kinds of stuff. He does not. His information about CEM is wrong.

Even COG News is criticising Malm's blatant false accusation about Wes. James Malm once more come out looking like a complete idiot. Can you imagine such a liar like him in charge in the millennium?

This is so funny watching Malm get called out as a lair. What an idiot. Apparently lying is not one of the laws that Malm keeps very well.