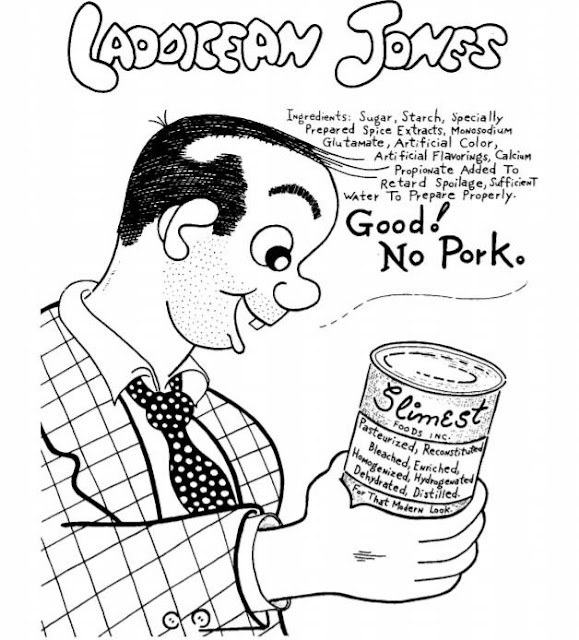 "Laodicean", indeed. He's not concerned about a lack of whole wheat in there?

I agree with this. Processed "food" is destructive for our bodies. So we shouldn't eat it anymore than we should smoke cigarettes.

But by law, you can give pork to the heathens to eat. Maybe it isn't clean but neither is monosodium glutamate and no where does god say don't eat prom because of "health reasons".... He says don't eat it because you are to be set apart from others like he is.

This comic mocks a sincere simpleton for doing what the Bible tells him to do. The WCG artists apparently wants this guy to Judaize and to take on a burden that neither the Old nor New Testaments require of him. Not cool.

I prefer the PCG version...

We knew to avoid food additives wherever possible during the ‘60s. Prevention Magazine and health food stores were very big amongst the membership of the old Radio Church of God.

The old guard would draw from the cartoon that Laodiceans of today are only half diligent in that they only watch out for the unclean meat-based ingredients. So, “Laodiceans” (I don’t believe in church eras) violate the temple that is their body by consuming equally harmful chemicals. Back in the day, we considered these chemical ingredients to be on the same plane as smoking tobacco products. Diligent church members just didn’t do it.

Speaking of Laodicean, LCG's public proclamation seems to have gone in that direction.

There was a time, a decade ago, when LCG proudly announced single-week TV responses above 8,000.

Last week, Gerald Weston announced that LCG had that week mailed 5,600 copies of its new booklet about evolution. Weston offered the booklet in December but did not mail it until last week, and he also sent it to all LCG member households.

"Last week, Gerald Weston announced that LCG had that week mailed 5,600 copies of its new booklet about evolution. "


I'm sure it was profoundly convincing.

The whole church era thingy was bogus from the beginning.

In Revelation, seven cities were mentioned - each existing in the exact same time. Each church in each city were regionally different - just like Vegas, Austin, Charlotte, New York City, Boston, Nashville, and Miami are all regionally different. They all had different characteristics. If we were to look at each of the seven cities I mentioned above in the same light as the seven churches mentioned in the Revelation scriptures, they could all easily be considered different, and anyone who puts a little time into it will see each city is completely different from the others in it's own styles.

With that said, groups formed in each city would be fully different from the other groups. The New Vegas converts, for instance, would be grappling with sex, gambling, drinking, etc. more than the other cities on average, while cities like New York City and Boston might be dealing with issues such as greed, lust, power, and white-collar type issues more-so than a city like Charlotte. (excluding a few.) The point is, the entire "era" concept was never even intended, or alluded to, be used, in my opinion, as some sort of chronological order of the progression of the Church, because it bases the Church as a physical corporate then a spiritual entity.

Are the clean "Slimest Foods Inc" products available for order on Amazon???

I checked Whole Foods, Tonto. Slimest is non-Halal, so it's been recently removed from their catalogue.