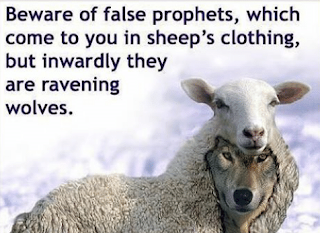 It is a rainy day in California today and our resident lying false prophet of Arroyo Grande is making an ass of himself yet again, all at the expense of Christians who are better Christians than he is.

He starts his latest entry out with this:

As the Chief Overseer and doubly blessed prophet, Bob Thiel sits in his warm home on this night living a life of privilege after a good meal of ample food, sitting at his computer while surrounded by his loving family, he DARES to sit there and write the kind of shit that he did tonight. 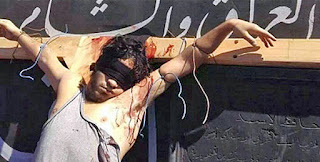 Imagine how the Christians in Syria would feel reading this shit from Thiel when their lives are ripped apart, their homes bombed or damaged by constant conflict, family members who have been slaughtered in front of their eyes, wives and daughters raped in front of their husbands and fathers and later to be taken as slaves by Isis.

Imagine what it would feel like to stand up for your beliefs and your faith to the point you are willing to die and then know that some asshole in America claims they are fake Christians. On top of all of that, to then have him constantly claim that he is suffering persecution for the shit he writes and as he claims he IS the ONLY true church.  Can he get any more disgusting?

Thiel then has this:


There are concerns among professors of Christ in Syria that a pull-out of US troops may mean genocide for them:

KOBANE, Northeast Syria – With the pullout of US troops, Christians here in northeast Syria told CBN News their future hangs in the balance.  With the region on the brink of chaos, they’re fearful and warning of a new genocide.

Just a few years ago, ISIS left a scar on the land in the form of an historic genocide in parts of Iraq and Syria.  Now Christians fear another potential apocalypse with enemies all around them. 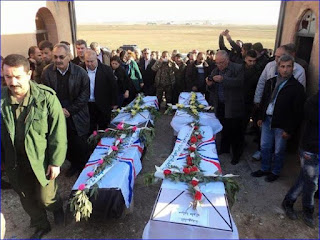 The self-appointed illegitimate leader of a heretical Church of God dares to call the "professors of Christ"  when he has constantly turned his back on anything related to Jesus as he preaches on hundreds and hundreds of asinine topics while ignoring what Jesus did and accomplished.  Like James Malm, Thiel is a whore to the law.  It is his god. He also places far more importance on his dreams and make-believe blessings than ever admitting Jesus is a part of his life.

Never fear though, as Thiel sits in his warm home he wants the Syrian "fake" Christians to know he is praying for them.


The situation in Syria has been horrible. I have been praying for those affected in Syria for some time and again ask others to also do so.

Thiel's god is ok with Syrians being slaughtered while he is delightfully pleased that Gaylyn Bonjour doubly blessed Thiel.  Can anything get any crazier!


While the Continuing Church of God does not consider that the modern Armenian Orthodox are part of the Church of God, there are certain doctrinal similarities (as well as important doctrinal differences...).

Between civil war, chemical weapons, murders, deaths, and war crimes, it is terrible what the people in Syria, professors of Christ, Muslim, or otherwise have had to endure.

I pray that the "kingdom" that Thiel desires never comes.  Can you imagine what a miserable hellhole it would be!  A land of self-serving, self-righteous, self-appointed prophets proclaiming they are the instrument of God as they treat anyone outside their privileged little circle as Laodiceans who need to be re-educated.

The Syrian Christians are better Christians that Bob Thiel will ever be. They are willing to die for their beliefs while our California false prophet lies about how he came to be a splinter cult leader and then whines and bellaches about being persecuted.
Posted by NO2HWA at 9:08:00 PM

Wow. I can feel the butt burn all the way out there in Minnesota!

It's difficult to imagine God not taking into consideration these Syrian Christians' remarkable attitudes and dedication, even if it ends up that they have gotten a couple of things wrong. Matt. 7:2, Bob. Matt. 7:2!

In ancient pre facebook and pre google times a cia political analyst could read a pt magazine and conclude that a network like cbn catering to a certain segment of society/voters, is showing a divergence in official policy by the current administration.

Is CBN calling for staying in Syria or to allow more refugees in the USA.

I visited the aramaic speaking christians in the hills about 2 hour drive from damascus.

It pained my heart to see a recent documentary about the village and church where they said the "lords prayer" in aramaic, destroyed.

I wish those christian folk a favorable press as the christian world is by now annihilated in the entire middle east, except for the many and loud palestinian school classes paying hommage to nazareth. (a sight to behold all these little arab christian kids in Israel)

Bob Thiel, who loves to foolishly compare himSELF with others, and often "shoot himSELF in the foot," out of his mind/mouth said: "....I have been praying for those affected in Syria for some time and again ask others to also do so....the people in Syria, professors of Christ, Muslim, or otherwise...along with all of us, need to pray “Thy kingdom come” ..."

It appears that Bob Thiel's praying for "some time" has all been in vain. What does "some time" mean? How long is that? Apparently, not enough from Bob Thiel, b/c nothing changed.

This present evil world controlled by it's god still lies in wickedness. Has that kingdom come yet? No. Somebody's kingdom(s) are here on earth! Does Bob Thiel think he has an "in" with some god of his that Bob worships? Does Bob think he can change, sway, God's mind.......or god's mind? Nothing changed, but we're all learning to hate evil.

Once upon a time, a man had his eyes opened, literally opened, and he had the perspective to give us the following knowledge about a God. The man said this:

"Now we know that God heareth not sinners: but if any man be a worshipper of God, and doeth his will, him he heareth." John 9:31

It appears that God is not hearing the prayers of Bob Thiel. What means it? Is Bob a sinner? Well, I think we can say, without doubt, yes!

Is Bob a worshipper of God? Bob thinks he is and he knows who isn't, but what is the truth?

The scripture indicates that God is not hearing everyone. Does god, that god of pain, suffering, death (Heb 2:14), fear, bondage (Heb 2:15), etc., hear everyone?

Are any of Bob's prayers in vain?

Bob continues to blame/judge others, pointing his finger at others, while 3 fingers point back to himSELF!

It appears that Bob Thiel, as are so many xcog hireling leaders (e.g. Winnail, Malm, Weston, Pack, Flurry, Franks, Kubik, etc.), are doing virtually nothing. Is there more going on in this present evil world than what appears to the 5 senses? Christ said: "Take therefore no thought for the morrow: for the morrow shall take thought for the things of itself. Sufficient unto the day [is] the evil thereof."

We are daily in one way or another reminded of the evils all about us!

As Bob Thiel continues to let us know how he compares himSELF with all of the rest or us, and others of this present evil world, why not contemplate the good news of the following verse, for a change? And yes, trespasses are in all of our lives...even Bob's!

"To wit, that God was in Christ, reconciling the world unto himself, not imputing their trespasses unto them; and hath committed unto us the word of reconciliation." 2 Corinthians 5:19

But what about all of Bob Thiel's efforts? Back to that blind man, who went on to say this:

Jesus Christ was "of God," but Bob Thiel...who is he? Of God? Doing something? Of god? Doing "nothing?"

ISIS was and is an American creation. It was done to create an enemy to justify the billions of dollars spent by the defense department. This was the time when Russia was considered a friend until Putin came in and put a stop to the thieves stealing Russian resources.

The leaders of these cogs are not going to be in the kingdom. They are all money grubbing little twits stroking their egos thinking that they are walking in HWA's shoes.

The "christ" whom Thiel professes is not the God of the Bible. Thiel's christ is a gnostic demiurge, keeping most people ignorant but nevertheless punishing them with earthquakes, hurricanes, cancers, and other maladies when they fail to satisfy his self-admittedly jealous need for praise from the beings he created but keeps in ignorance.

Lets reverse this on Thiel using his own language ---

Bobby Thiel, So Called, Self Claimed Prophet, Professor of Herbert W. Armstrong, is making a darn ass out of himself!

Tonto, you missed a few. Here's another try, using Thielisms to describe Thiel:

Bitter Bwana Bob Thiel, Pasturd and Overseer of the improperly named Continuing Church of God, is being persecuted by professors of Herbert Armstrong who recognize that HWA was correct in writing that no prophets have administrative (e.g. Pastor/Overseer) functions in the New Testament Church. Unfortunately, since no actual Pastor or Overseer will recognize the Petulant Prophet as legitimate, Brazen Bob has joined with Dave Pack and Gerry Flurry in declaring HWA wrong, and has taken for himself titles that he does not merit.

Here Is Another DAVE PACK Video with ALL NEW QUOTES DAVE SAYING CHRIST SENDS HIM AS ELIJAH AND MORE. Called "Cognitive dissonance" REGARDING HIS FOLLOWERS. Please Share Expose this fraud.
Thanks

I was a god addict for a long time, hooked on Armstrongism. It's sad to see so many still addicted. Withdrawal was a long and painful process.

I am curious to find out what blog platform you happen to be
using? I'm experiencing some small security problems with my
latest site and I'd like to find something more risk-free.

Do you have any suggestions?

Hello! Would you mind if I share your blog with
my myspace group? There's a lot of people that I think would really enjoy your content.
Please let me know. Cheers

He may rally, uh, people who profess Christianity (although some Catholics make a distinction between themselves and "Christians") in a 99-percent Muslim emirate.

How many COG leaders would dare do that? Beyond Victor Kubik of UCG, who seems unafraid to travel anywhere, perhaps none.

Beyond Victor Kubik of UCG, who seems unafraid to travel anywhere

Have you noticed that Vic isn't your typical tourist who sets some of his paycheck aside to take trips that interest him?

His employer pays for his travel at the Feast, as well as to congregations of his church during the year. His personal charity pays for his trips to the Ukraine. If UCG and LifeNets stopped footing the bill, would Vic travel nearly as much? I doubt it.