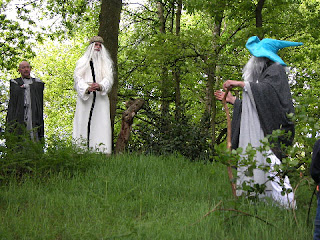 Are you ready to surrender your brain to your minister and start wearing the blue hat and white robe?  The blind obedience to the ministry of Armstrongism is appalling!  It is much better to do what you are told and not enjoy a cigar, some chocolate, etc., in order to show how submissive you are.  I guess he sees no disconnect between his fist paragraph where he says we are to do what a ministers says, but that the failure to follow such commands is not a sin.


There is no dispute that the church has legitimate traditions and the
authority to implement and enforce those traditions. The appointed
ministry could make an edict tomorrow requiring us all to wear blue, pointy,
scull-caps and long white robes. This would be within their authority, and any
member of the congregation who refused to wear a pointy cap could be
rightly dis-fellowshipped by that God given authority. I am unconvinced that
failure wear a pointy hat would be a sin, unless that sin was a sin against
church authority. Failure to wear a pointy hat would (to me) seem to be a
breach of rightfully implemented church tradition. Calling a transgression of
the pointy hat rule a transgression of God's law (SIN) seems to be a bit of a
stretch. Please feel free to correct me on this matter.

The no smoking tradition is based upon an extension of the principal that
our physical body is the Temple of God and that we must do what we can to keep
that temple pristine. This is a good and righteous principal; while recognizing
that this body is a temporary shell that is designed to fail and
thatover-working to "live forever" in the flesh, due to our own physical
efforts, is at best vanity and at worst idolatry.

I have witnessed far too many people in the church (particularly in
Southern California) who seem to be of the opinion that failure to self-medicate
with the latest herbal supplement cure-all fad; and a failure to do the Jane
Fonda work-out 8hrs a day, while enjoying yogurt colonics is also a "sin"
against the temple.

I find it amusing that simply breathing the air in Southern California has
been equated to smoking two packs of cigarettes a day.
I also find mildly entertaining the obese, diabetic deacon (with twinkie in
hand) railing against chewing on a green leafy vegetable (tobacco).


Nehemiah 8:10
Then he said unto them, Go your way, eat the fat, and drink the sweet, and send
portions unto them for whom nothing is prepared: for this day is holy unto our
LORD: neither be ye sorry; for the joy of the LORD is your strength.

This is only one of many scriptures that show that as humans there is no
sin in enjoying what could be considered a "guilty pleasure" from time to time
(in moderation). Like chocolate cheese-cake, a drink of good whiskey or (dare I
say it) a fine cigar.

This scripture in Colossians:

In conclusion, the church absolutely has the authority to make tradition.
That tradition could legitimately be a ban on smoking, prohibition of make-up,
high fructose corn syrup, and the implementation of mandatory yogurt colon
cleanses and pointy hats as a tradition for us to follow. I am simply not
convinced of the level of "sin" involved in fudging on these traditions, nor the
wisdom of the ministry legislating these types of "specks".


If I am ever so spiritually solid, that a major spiritual concern of mine is
my level of high fructose corn syrup intake, (or more particularly legislation
of my brother's corn syrup intake) then I can safely say that I am over-due to
get hit by a bus, and be whisked off to the kingdom.

Email ThisBlogThis!Share to TwitterShare to FacebookShare to Pinterest
Labels: Armstrongism, Church of God, cult thinking, Ministers can tell you what to do, Traits of Cult's

A great truth has gotten lost here some how: The church is the congregation -- the body of the believers. It is not the minister. The congregation decides.

Therefore, any crackpot cultmeister who comes along as a one man show is NOT, repeat NOT, to run things. The only authority the minister has is to carry out the wishes of the congregation and, like, minister to them. He can anoint them for the healing of the sick. He can act as the conduit of blessing to the children. He can instruct in the ways of righteousness. He has the authority to set the right example.

Near as I can tell as based on a Biblical foundation (though I don't claim myself to be a man of very much faith, as it may be), there are no Apostles today. I don't see any council representing all the Christian religions on the earth in one body. Heck, I don't even see a council of elders representing the Sabbath keeping Christians as a body. The "Body of Christ" is in hacked up pieces. Scratch the idea that there is any dogmatic Scriptural godly appointed body to represent all believers. The Catholics would come close, but they are, after all, idolators, bowing down before graven images, and you know, we should be just a little suspicious of that.

It used to be in the olden days of Kings and fiefdoms, that the Nimrod strongman rose to the top of the Camelot dominion by winning wars. These days, mentally unbalanced nutjobs hang up a shingle and people flock to him for no discernable rational reason.

And there we go. Someone unqualified to be dog catcher, leading a congregation, establishing silly traditions which make no sense at all, with everyone pretending that the Emperor with no clothes has some sort of authority over them. Have they gone daft?

Of course they have. And if they want to persist in the craziness, let them.

After all, they have free choice, don't they?

Or have they surrendered that to a crackpot for no particularly sound reason?