The Beast Power: "...is some kind of Catholic" 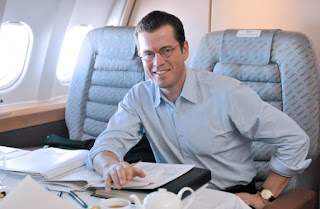 Besides worrying about halal turkeys, Prophet Thiel has bigger fish to fry.  He is on his Beast Power trip with Karl Guttenberg today.  Guttenberg was the German who moved to Connecticut recently that whipped Thiel into an end times frenzy. He is a spy in our midst gaining intelligence secrets from society around him that he can use later when Germany invades the country.

Today, Thiel lists several points on why Gutenberg may be the Beast of Revelation:

Here are 23 items to consider as to why Karl zu Guttenberg could possibly fill the role that he now seems to be advocating:

To slightly expand on point 14, notice the following news account that suggests his wife’s attitude is that the state is above the Catholic church:


…Stephanie zu Guttenberg, the head of a leading child protection group and wife of Defence Minister Karl-Theodor zu Guttenberg, who called on the state to get tougher on abuse rather than leave it to the Church…Guttenberg, who is the German president of the anti-abuse group Innocence in Danger, said the state could not leave it to the Church alone to pursue abuse.
“Priests and clergymen are citizens of the Federeral {sic} Republic of Germany. And if a citizen here commits a crime, then that must be punished through the institutions of the state,” she told reporters at a fundraising event Monday evening. (Minister calls for abuse compensation. The Local: German News in English, 9 Mar 10. http://www.thelocal.de/national/20100309-25745.html viewed 03/09/10)


So, if Baron Guttenberg has a similar attitude to his wife, he may feel that the state has the obligation to be above the Catholic church–a view that seems consistent with one that the King of the North has (cf. Daniel 11:36-38).

When he became part of the Washington-based Centre for Strategic and International Studies, Baron Guttenberg acquired new contacts in the USA that he is likely to use politically in future. And since there is at least one major Israeli leader in the same think tank, this may influence him enough so that he possibly can fulfill the prophecies Daniel 9:26-27 (which he may do directly, or perhaps only through confirmation indirectly).


Thiel concludes his article in typical COG fashion. After decades of failed prophecies and outright lies by Meredith and others, Thiel overs his butt by ending his entry with this:

On the other hand, it is possible that Karl-Theodor zu Guttenberg could simply be a normal politician, with ups and downs like many others. We will see.


I guess Thiel wants to make sure that when Germany invades the country that they don't head straight to Arroyo Grande to imprison him and his family.  Oh wait, they will be in the Marriott at Petra.  How silly of me!

Once again, we have the guessing game being played, and it fits the HWA model or pattern rather than, say, the pattern of the prophets in the Bible. The difference? The Biblical prophets are described not as reading or hearing news and then guessing, but as having direct advance revelation from God. Even non-believers can appreciate the enormous differences involved!

Besides worrying about halal turkeys, Prophet Thiel has bigger fish to fry.

NO2HWA, I love the mixed metaphor.

I was really hoping the Beast would be a leader of the Armstrongist Churches of God.

The man "who could be the beast power unless he is just another politician" sure looks like a big meanie. And a teatoatler as well, or is that coffee?

Well, you know, if an Armstrongist were the Beast, it would be symmetric, since they have any number of False Prophets to choose from.

What Dr. Bob is reminded of when he sees a picture of Karl Guttenberg, is the father of Damien from the Omen film trilogy.

Christians have been in an end-times frenzy for roughly 1,980 years. The arising of the "beast," the appearance of "that man of sin," the return of Jesus Christ, the tribulation, and the end of the world as we know it, have all been "just a few years away, definitely within our lifetime" for nearly 2,000 years. At the turn of previous millenium, leading up to the year 1,000 AD, the end-times frenzy reached a fever pitch then too. But nothing happened. Meanwhile, charismatic politicians have come and gone. Why should I expect Herr Guttenberg to be different?

"...charismatic politicians have come and gone. Why should I expect Herr Guttenberg to be different?"

You shouldn't. Remember Strauss, the big candidate for the "Beast."

Daniel is a spurious imaginative fiction from the time of the Maccabees and Revelation might be the recollections of a deranged person's nightmares.

It's a waste of time reading either one, and in my opinion, the whole Bible is a waste of time. I don't read it anymore except when I need to look something up to assure the accuracy of my attack.

Once you realize that the modern day Germans did not descend from the ancient Assyrians, Thiel's entire premise becomes ridiculous.

Their only basis for this German-Assyrian connection is HWA's alleged apostleship, since you simply cannot prove it through any legitimate means.

But the difference between points 17 and 20 is... what exactly?

There are two verses that plainly show that Bob Thiel can NOT make Herr Guttenberg be the beast:

Revelation 12:3 And there appeared another wonder in heaven; and behold a great red dragon, having seven heads and ten horns, and seven crowns upon his heads.

The Beast must have 7 heads and 10 horns! Herr Guttenberg, as far as I can tell, only has 1 head...and he appears hornless.

Karl Guttenberg is way less of a 'beast', compared to either HWA or GTA.

Plus, he's not a false prophet(but those two were.)