Is Prophet Thiel Cavorting With The Mother of Harlots? 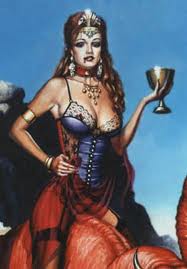 Prophet Thiel and apostle Malm have been having a snit-fest lately picking apart each others prophecy mutterings.

One of apostle Malm's acolytes writes:


James, By now you have probably already seen or heard about Bob Thiel’s recent comments refuting your posts related to his mixing pagan prophetic writings with biblical interpretations. Since reading his post I am aghast at his own admissions on it. It seems as if he has opened up himself to the flattery’s of Satan convincing himself that he is capable of playing with lies and deceit. Becoming a presenter of mixed good and evil, to dabble with the mother of harlots and her false teachers. Then to have the audacity to accuse you of miss-leading others…….that is just ridiculous. Since when does mixing truth with error make something right…… I am at a loss to understand why Meredith has allowed Bob Thiel to propagate the material he presents. These are perilous times for the brethren…..


Obviously there is no way that anyone else in LCG would be allowed to  say what Bob says.  Bob seems to be the official “unofficial” mouthpiece of LCG [the "unofficial" being simply a false cloak to say things they do not want to say "Officially"]  and he would never say anything that Rod does not agree with.  I expect that it was Bob who has deceived Rod and the other LCG leadership into agreeing with this wickedness that will snare them in the tribulation.

What I want to know is who the father of the harlots is -- are they all bastards?

How come it's never the Father of all Pimps?


Women get such a bad rap in the Bible.

I give up trying to figure out just how the mind of the COG leader works.

Jesus is coming soon, so let's build a college, an auditorium and a really nice house.

Sadly and of course, we don't use crosses in the LCG. They pagan and Jesus died on a stick. However, Mayan prophecies point to Jesus second coming along with the Bible.

I and my wife are the two witnesses and our job is over.

The tribulation is yet to come and happened over the past three and a half years.

Jesus did come and is still coming over the next year. (What, he can't kick that white horse harder?)

But I am still a prophet and an Apostle even though nothing I say works out and I sent myself.

I am an apostle even though I am the only one that says that. No other christian church, minister or member ever heard of me and no one but me calls me an apostle.

Bringing culture at a high price to the Okies is preaching the gospel and it's ok to use the member's money for such Gospelspreading.

Men can't have long hair but we can't explain why not.

Women must cover their heads but after looking at the universe through the eyes of the Hubble telescope, we can't figure out why it is important.

A man who has appointed himself something or other , who is near blind, high sugar, no income and kinda cranky, a bringer of bad news and dictatorial is going on a baptising tour bringing good news

I thought we had covered this:

There will be no second coming of Christ. There will not be. The Bible is very clear on this.

It will be the third coming.