Brethren, even through I am wrong you need to appreciate that I tried 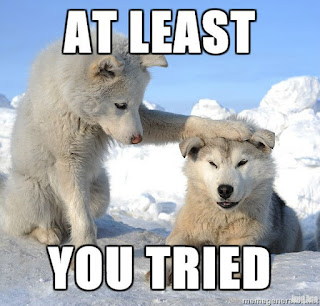 This is how Dave Pack and Bob Thiel think:


I’ll just say this. If what I told you does not apply, I, nor any minister I have ever talked to, has the faintest idea what on Earth, Christ was talking about. We just don’t know, and it’s just there for some reason that not a single one of two thousand ministers could have ever known in the past. But you can appreciate that, in light of what I said, if I’m right, you can understand why no one would have ever had a clue what it was talking about. They had no chance to understand. That, not until you had lived through three years of doing what we did and noticed that Paul went three years, and then maybe there’s one more year to go…


Even though I do not know what I am talking about and even though I am 100% wrong, you must appreciate my trying.

This is the sad state of thinking that pervades the church to this day.  No one holds their ministers accountable.  Various COG's never hold the obvious heretics like Pack, Malm, Flurry and Thiel  accountable for their lies.  "Oh, but they are our brethren, we cannot say anything bad about them."  When they do not hold self-appointed liars accountable, then they too end up being lairs.  Their inaction allows the hundreds of splinter groups to function today. It allows the sick deviate men to ruin member lives and they do not care.  That is what we have so many fools running COG's today. Just look at Thiel, Malm, Pack, Wienland, Cox and Flurry.  Can there be 6 more idiotic men in  the Church of God today?
Posted by NO2HWA at 10:56:00 AM

Everyone who claims to interpret holy books or speak for a deity is wrong in objective terms. They may not realize they are wrong. They may be very sincere. But the fact is, they are all simply guessing. They see something that appears to make sense to them, within their highly restricted set of learning and ignorant assumptions, and within their malfunctioning faculties, their hunches are all transmuted into Truth™ with a capital "T". It should be obvious to anyone, including themselves, that their Truth™ is a set of objectively wrong guesses, because isn't even internally consistent.

If one wishes to do this privately, that's fine, because it is only themselves they are deceiving, but when they begin preaching it to others, as though they had some reason to think their hunches and suspicions were not wrong, that is when they become truly irresponsible.

"Just look at Thiel, Malm, Pack, Wienland, Cox and Flurry. Can there be 6 more idiotic men in the Church of God today?"

Let's not forget Meredith, Kubik, and Franks. That brings the number of large-scale idiots to 9. Dankenbring, on a par with Malm's more extreme idiocy, would make an even 10...

"Can there be 6 more idiotic men in  the Church of God today?"

Yes, there can. So often forgotten is Yisrayl Hawkins who has been featured multiple times on Dr. Phil. It's hard to understand why he's forgotten so often. In fact, CBS declared: "House Of Yahweh: A Darker Sect Than FLDS". Hard to top. He's like the cousin no one acknowledges or ever talks about. Seven, the perfect number for the triumvirate.

Beyond that, there are no awards for failing.

Unless you're a millennial.

We've still got over a year to go before the resurrection according to Dave, he's already back peddling. At least he should wait 3 to 5 more years before admitting failure.


"Oh, but they are our brethren, we cannot say anything bad about them."

All the personal cults of these false prophets are satanic imposter cults and are NOT part of the true church.

Anyone who thinks that any of these characters is a true prophet or a true brother is DECEIVED.

The so-called COGs are full of many FRENEMIES (people who pretend to be friends but are actually enemies).


False prophets like David Pack have deceived many sincere former WCG members. However, it is now well past time for them to smarten up and get out of Dave's RCG. Any further listening to David Pack's ongoing noise can only result in serious brain damage.

"Woops! Oh well, I tried! And all you really gave up for trusting me was a huge portion of your income, your weekends, career, educational and cultural opportunities, your relationships with friends and family.. but it was all worth it to have a good little laugh with each other right now, right? Ha ha, who knew?"

Those that do not stand up for the truth, do not have the love of the truth. If one does not have this, then their faith is null and void.

Satan's angels did not stand up for the truth either, and we all know what is going to happen to them.

If I don't understand it then no one can understand it or ever could? Is that what this fool is saying about his delusional mythmaking?

What if Dave Pack, Bob Thiel, Ron Weinland, James Malm, Rod Meredith, Gerald Flurry, and the other principals of the ACOGs had taken early retirement, had visited their local clinic, had obtained their medical marijuana cards, and were partaking of the euphoric states of mind possible through Snoop Dogg Select, or Willie Nelson Signature brands of medical marijuana? Do any of us in our heart of hearts imagine that these men would be coming out with edicts and pronouncements that are any more ridiculous than the quotes which we hear and read almost on a daily basis?

In some cases, I dare say that the sewage that seeps from these open sepulchres would be vastly less toxic and would reflect greater logic, wisdom and stability if they were regular users of MM! As it is, allegedly in a "clean" state of existence, it is as if they are in a contest to determine who can attract the most attention by making outrageous statements, mandating acts of enslavement, and relentless braggadocio about their little piss ant "works" which are virtually unknown by all outsiders who are inexperienced with the Armstrong problem.

I firmly believe that the large stealth groups which maintain a low profile and do not get reported on here are every bit as bad, and are experiencing the same level of ridiculousness and problems as the ones who refuse to meter and restrain their dialogue. The belief system causes the behavior. Some are just more sophisticated in denying or masking the natural results, which are universal amongst the participants.