Bob Thiel Getting Played By His African Leaders 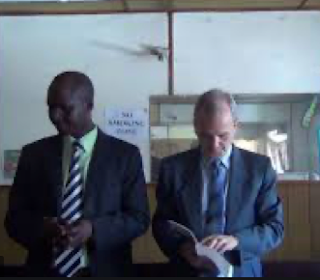 This just in from Africa...

What we all have known for several years now is that Bob Thiel, the Great Bwana to Africa, has been a useful tool for some of his African leaders who have been using him along with other COG groups. They have a long history of doing this in addition to getting what they can from the Seventh Day Adventists.

Ochieng is supposedly Thiel's top "evangelist". If he is Thiel's official evangelist, does that make him an evangelist for the other COG groups too? But, since Thiel claims his group is the ONLY true church doing a work today, how does he justify Ochieng spending his valuable evangelistic time with the other groups?

Thought you would find this of interest. Bob Thiel's man in Africa, Evans Ochieng, works for any church he can. Currently, he works for these:
1. Midnight Ministries- Malcolm B Heap
2. Church of God In Truth and Peace- James Russel
3. A Voice In The Wilderness Church of God- Bill Goff
4. Continuing Church of God- Bob Thiel

Bob is not "getting played." A couple of years ago he was told about two such African freelancers he claims as CCOG leaders. He has done nothing about either of them, judging by his letters to CCOG brethren.

Bob must be VERY pissed that the COG ASS split from LCG is already more than four times the size of his CCOG in the United States.

Bob needs to do something more to set his church apart from the many tiny COG splinters.

In fact, I'll make a prophecy (as Bob certainly won't). The Scarborough family in Kansas City came very close to convincing Rod Meredith to implement New Moons observance in LCG, but other LCG COE members intervened and put a stop to this. Now that the Scarboroughs are majority donors and influencers in COG ASS, I prophesy that within two years COG ASS will introduce some officially sanctioned New Moons observance, probably a mandatory Bible study.

What can Bob do to set CCOG apart? Only time will tell.

Africans are good at exploiting the generosity and stupidity of Americans.

Anon 2:12PM:
Americans are good at exploiting the generosity and stupidity of Americans.

Nope. COG Assembly will never institute anything "new". They still teach that the Revelation 12 place of safety is for the Christian, even though the woman in v13 isn't the church. They still teach preaching the gospel as a witness, even though Jesus never made such a command. They still hire servants to work for them on the Sabbath, even though Exodus 23:12 states that one of the reasons for keeping the Sabbath is that the stranger may be refreshed. Don't hold your breath waiting for them to fix these wrongs.

4.50 PM
Humans are good at exploiting the generosity and stupidity of humans.

Dave Pack belittles and mocks brethren who choose not to attend the FOT, and mocks another COG