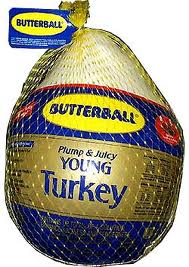 Leave it to Prophet Thiel to have such an absurd posting on his blog today.  I still never cease to be amazed at the stupid things that occupy Armstrognite believers minds.  Imagine a turkey taking precedence over the words of Jesus.  Oh wait, this is Armstrongism, after all......

One of his readers, most likely another LCGer, sent him an article that claims Butterball turkeys are killed according to halal specifications. But then you have to take the source of this news story.  For some reason COGers love to read World Net Daily as a news source.

Anyway, here is the blurb this reader sent to Thiel:

America’s favorite meal may be secretly dedicated to Allah…
Customer service representatives from Butterball, one of America’s most popular Turkey brands, confirmed to WND that the company’s whole turkeys are – without being labeled as such – slaughtered according to Islamic “halal” standards…Multiple phone representatives at Butterball confirmed the turkeys are slaughtered according to halal standards, and one named Tracy (she declined to give her last name) further confirmed the words of Islamic dedication are spoken over the birds.  Has your Thanksgiving turkey been sacrificed to idols? http://www.wnd.com/?pageId=370177#ixzz1eRWF91z4


Then the Prophet asks the questions if Christians should eat such meat.

Presuming that WND is correct, this does seem to be a bit unusual.  Perhaps I should add that the above article also states that Butterball is not the only company that allows Islamic prayers over turkeys (there also may be Islamic prayers over other slaughtered animals as well).

Some people find such practices offensive.  And it does show that there is increased Islamic influence in the USA.

But should Christians be willing to eat such meat?


The Prophet responds that it is OK to eat the turkey as long as you do not offend your guests if you tell them that a Muslim prayed over the turkey.  He uses Paul as his defense:

4 Therefore concerning the eating of things offered to idols, we know that an idol is nothing in the world, and that there is no other God but one. 5 For even if there are so-called gods, whether in heaven or on earth (as there are many gods and many lords), 6 yet for us there is one God, the Father, of whom are all things, and we for Him; and one Lord Jesus Christ, through whom are all things, and through whom we live.
7 However, there is not in everyone that knowledge; for some, with consciousness of the idol, until now eat it as a thing offered to an idol; and their conscience, being weak, is defiled. 8 But food does not commend us to God; for neither if we eat are we the better, nor if we do not eat are we the worse.
9 But beware lest somehow this liberty of yours become a stumbling block to those who are weak. 10 For if anyone sees you who have knowledge eating in an idol’s temple, will not the conscience of him who is weak be emboldened to eat those things offered to idols? 11 And because of your knowledge shall the weak brother perish, for whom Christ died? 12 But when you thus sin against the brethren, and wound their weak conscience, you sin against Christ. 13 Therefore, if food makes my brother stumble, I will never again eat meat, lest I make my brother stumble. (1 Corinthians 8:4-13)
27 If any of those who do not believe invites you to dinner, and you desire to go, eat whatever is set before you, asking no question for conscience’ sake. 28 But if anyone says to you, “This was offered to idols,” do not eat it for the sake of the one who told you, and for conscience’ sake; for “the earth is the Lord’s, and all its fullness.” (1 Corinthians 10:27-28)


I am glad that is all settled!  Now I don't have to throw out my Butterball turkey!.  As if I would anyway!

The COGgers who would worry about this simply do not trust God. There is a lot worse stuff that happens to our foods in processing than adhering to Muslim standards. I, too, hate the increasing Muslim influence on our American way of life, but the bottom line is that these turkeys are apparently being subjected to another set of checks and balances, with the consequence being that they are probably higher quality than turkeys which are not.

As to the prayers to Allah and Muslim blessings, since there is no such thing as Allah, who really cares?

Even if I cared, just because Butterball says it slaughters its turkeys to Halal standards, that doesn't necessarily mean that an imam prayed over each one. It probably just means that they were slaughtered in accordance with the dietary standards. Just because something is "kosher" doesn't mean a rabbi blessed it, but merely that it was prepared in accordance with Jewish dietary requirements. Now, if it said, "Kosher for Passover," now that might mean that a rabbi did pray over it. Even if an imam did "dedicate" your turkey to Allah, Paul clearly says that this means nothing, either one way or the other, so obviously no one should be twisting their knickers over this. I know I won't be twisting mine.

They all worship the same god.

The blessing has the same meaning for them all.

Who cares? I don't. I'd be much more concerned about any chemicals that might have been included in the turkey's diet.

I give no credence to any imaginary god or the rituals assoctiated with that non-existent entity.

"As to the prayers to Allah and Muslim blessings, since there is no such thing as Allah, who really cares?"

Only someone who has blinded themselves can say that there is no Allah.

I Cor 10 shows that Paul had no intention of obeying what he is said to have agreed to in Acts 15. Paul was a liar and apostle wanna be. He won the battle against the early Jerusalem church and we are stuck with his stupid ravings to this day.