James Malm: People Who Wear Crosses Are Followers of the Anti-Christ 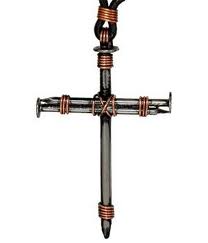 The apostate apostle Malm his getting his knickers all in a wad again at Ron Meredith. This time it concerns crosses.  Malm claims Rod is OK with crosses.  This certainly is news considering the humiliating drama that Bob Thiel created concerning crosses after the Milwaukee murders.  Thiel brought major embarrassment to the LCG because of his public hated of the cross.  However, Thiel's position was always the traditional Church of God stance since Armstrong came on the scene.

For Rod to say that this is not forbidden in scripture, is a statement of biblical IGNORANCE!

We are repeatedly commanded not to worship God as the pagans do; and the cross is a pagan religious symbol!  The cross is the symbol for Tammuz, one of the founders of the Babylonian Mysteries and is NOT to be venerated as a religious symbol.

To wear or use crosses is to identify oneself as a member of the Babylonian Mysteries and a follower of antichrist!  This is an ABOMINATION to the Father and Jesus Christ!
Posted by NO2HWA at 11:14:00 PM

So in that case following the Gregorian calendar must also be considered evil since many of the months are derived from pagan gods. We should be following the Hebrew calendar as that's what's used in the scriptures. In that case all COG leaders and members are doomed! Wake up COGs! Just free yourselves from the COG cults and become true Christians, and stop making stupid statements like those about the cross.

I'm still waiting for the morbid militant crackpots from Gideon's army to go postal and go on a cross-destroying rampage. Or, maybe they will start out by protesting easter sunrise services in westboro style.

How about no. At least not according to sermons Spanky belted out in the mid-80s; I think there was a Tomorrow's World episode in recent months where Spanky said the same/the usual. I was only half-listening, and I've no desire to go back through the episodes and find out which one it was, however.

What alternate universe is Malm living in, that he thinks a whopper like that would pass muster with anyone who has even a passing memory of Spanky Meredith from back in the day?

"So in that case following the Gregorian calendar must also be considered evil since many of the months are derived from pagan gods. We should be following the Hebrew calendar as that's what's used in the scriptures."

Funny you should say that.

Also note, the yearly calendars weren't ALL like that, the 1986-1987 calendar was a retrospective because that was the year Armstrong died. Unfortunately, the idol-worshippers didn't think to preserve any of the regular calendars published by the Church over five decades, calendars which did not contain such retrospectives.

And the earth is flat.

Yes, it's interesting about the Gregorian calendar system, which we all use. Goes to show the COGs are hypocrites of the worst kind when it comes to issues like the cross.

I'd recommend that Malm do a little experiment. Kind of a "man on the street" thingie. Walk up to a collection of complete strangers, and show them a cross, then ask what it means. Now, inadvertently, he will end up witnessing for Jesus Christ just by showing the cross, because that is who anyone walking the face of the earth recognizes the cross as symbolizing. Malm is going to hear a lot about Jesus during this experiment.

Know how certain Jewish roots people won't spell out the name God? When writing His name, they will use a dash instead of an "o"?
Well, if Malm is serious, he'd better begin using dashes for the letter "t", or the letter "x".

If anyone is curious about what we were taught back in the day about crosses, I would recommend that they do their own internet study on this topic. Very, very few scholars would agree with the history we were fed, or even question whether people were crucified on crosses during Jesus' era. Might get a little surprise. I do have a gold cross which I wear on occasion. I have yet to have anyone walk up to me to discuss Tammuz, but if anyone ever did, I'd know immediately the source of their religious education!

COGs don't dispute that Jesus died on a cross. JWs do. In any case it doesn't matter what type of structure Jesus was crucified on as it's not that structure we are supposed to worship. To quibble about what it was is as bad as idol worshiping. However, people who dress themselves with crosses are not worshiping the cross. They are worshiping Jesus.

Idolatry, not idolatry. Well maybe a little of both. When the WCG tried to foist that the cross was just a reminder of Jesus, they said it was not an idol in that case. The issue really lies with the person with the belief. Not that I believe that cross wearing is ok, however, I do not condemn the person who does so. That is what the COGs should teach, we are not here to condemn the world, but be a part of helping Jesus Christ, who came here to save it.

Most likely RCM has a large donor who wears crosses, some may remember his flip flop on going out to eat back in the day, the person with biggest donations won out when he was in GCG.

Some do actually worship the cross in a sense, especially the RCC where it is usually a crucifix. Being x (excuse me couldnt help myself with the x) catholic, it was more a thing to be revered. So to me it was an idol. Protestants and evangelicals likely do not worship the cross, however, even a definition of an idol is a reminder or image of something worshipped.

The real issue here is that COGs who do not wear crosses should not be in the condemning of those who do. Yet, within their sphere of teaching, would be better off talking about not condemning those outside who do and being willing to teach those who ask in a spirit of meekness and fear the reason of the hope that is in them.

So just because pagan religion used some thing or idea makes it anti-Christian?

Then the idea of a Son of God, virgin birth, miracles as a sign of divinity, baptism, eucharist, slavery, etc. all were believed in or practised in pagan religion too so why doesn't Malm and his ilk realize he's just as pagan to believe this stuff too.

Oh wait! That's right he's cherry-picking about what he thinks is "pagan" and what isn't.

Cherry picking? More like blind stupidity and/or lies on the part of all COG leaders.

There is nothing in this world that is not of pagan origin. Even Malm's name is pagan in origin, it is from an old Norse meaning ore. His name alone is the epitome of a pagan. It is best that he kills himself, but make sure he doesn't hang himself nor knife himself for all these could have pagan origin. Maybe just drown himself and get lost.

When I attended AC and the WCG, they taught us that Jesus was crucified on a stake because the Romans had not yet instituted the use of crosses for capital punishment. Of course, the word crucify actually comes from root words which imply cross, but this didn't interrupt their Hisloppian fantasies for a moment.

They also claimed, based on the hairstyles of the Roman emperors of the day, that Jesus didn't have long hair. Of course, today, we know more about the Galilean customs, such as hairstyles, and realize that a Romanized Jesus is patently ridiculous.

Bottom line is this. When a formerly pagan or worldly person gets baptized, WCG types acknowledge that this individual has been claimed by Christ, as one of His. But, somehow, they can't seem to accept the fact that centuries ago, Christians co-opted the cross for Jesus. Nobody except the culties associates it with paganism, and they haven't for centuries or even for millenia.
Armstrongites need to understand the restitution of all things. God is a powerful God, one who would never allow a "once pagan, always pagan" situation to continue. Why can't Armstrongites understand this? The stuff that really angers God is activity which can't be purified, like sexual orgies in the temple, or the sacrifice of children.

Christianity had to be merged with various pagan-isms in order for governments to get people to accept it.
The short list includes the egg-laying Easter Bunny, Santa Claus, and Santeria (which derive from pagan March Equinox fertility symbols, winter solstice rituals and the pagan Norse god Odin, and Vodun [Voodoo], respectively.

Perish the thought, that the Christian '3-God Collective' would be too weak to co-opt a legend of a hare who could, like the Virgin Mary, reproduce without loss of virginity!